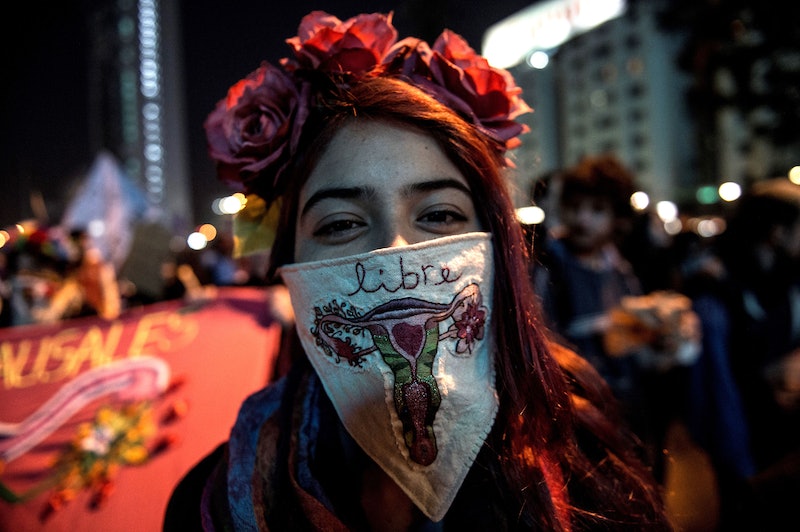 This week, reproductive justice advocates worldwide heralded news that Chile just lifted its total abortion ban. In a 6-4 decision in Chile's Supreme Court, it was decided that abortion would be legal in cases in which the fetus wasn't viable, the mother's life was at risk, or the pregnancy was the result of rape. It's a victory that's hard-won for Chilean pro-choice activists, after the law spent two years being debated in the country's Congress. Though Chile once had very permissive abortion laws, the Pinochet regime gradually tightened them until abortions were banned outright, so not only is this a huge victory for Chilean women's reproductive rights, but it's also a massive step towards undoing the legacy of the dictatorship in Chile.

Unfortunately, Chile was not alone in its unnecessarily restrictive abortion laws. The number of countries in the world where abortion is severely restricted or banned outright remains distressingly high. According to the Center for Reproductive Justice, in 2015 66 countries, 25.5 percent of the world's population, either banned abortion totally or only allowed it in very specific cases (rape or incest, for instance). And just because abortion is legalized doesn't necessarily mean it's easy, safe, or provided by local authorities without issues. The new Chilean laws, for instance, allow for doctors and practitioners to refuse to perform an abortion procedure, as they can in the United States. These five countries are at the very bottom of the list for abortion rights and access in the entire world, and sadly, there's not much that can be done about it.