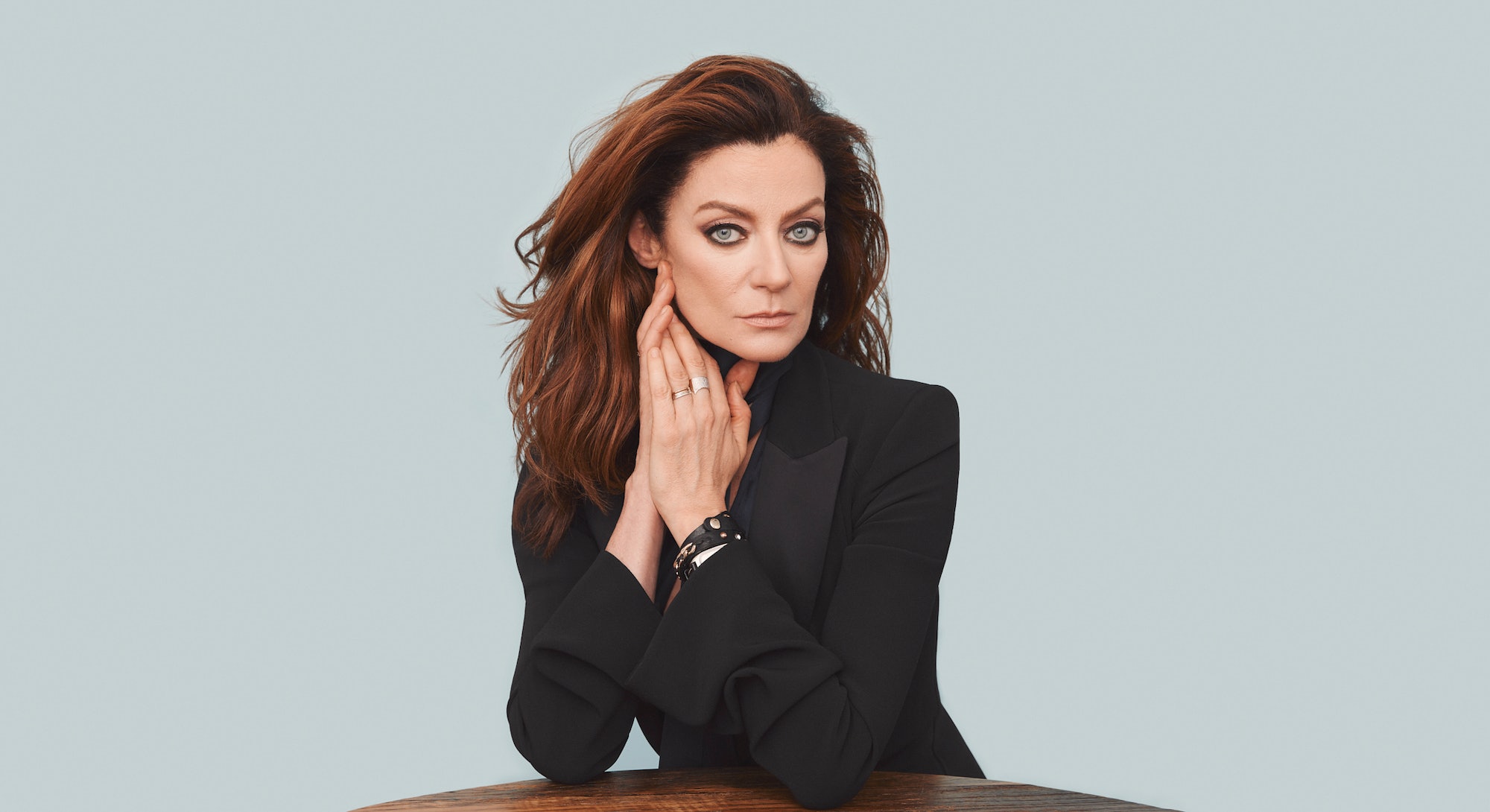 Michelle Gomez just wants to dance. Browse the actor's Instagram, and you'll see countless videos of her shimmying, shaking, and even rolling on the ground, whether there's music or not. She suggests that we dance during our conversation, and moves expertly to the music (it's Big Shaq’s viral hit "Man's Not Hot," to which she knows all the words) during her photoshoot, too. It's an impressive combination of comedic energy, self-assuredness, and general goofery that only Chilling Adventures of Sabrina star Michelle Gomez can pull off, which she does with panache.

"Apparently I came dancing out the womb," Gomez tells Bustle. She doesn't mean this in the literal sense, though watching a video of Gomez doing a groovy dance with a spoon to a Nelson Riddle song alone in her kitchen is enough to make you believe she really did emerge from her mother's womb performing a fully choreographed routine. "It makes me free and shakes off any nerves or anxiety, and then I'm kind of open for something good to happen."

It must be working, because good things have certainly been happening for Gomez. As the scene-stealing Ms. Wardwell, Sabrina's favorite teacher who's been possessed by the Dark Lord's disciple Madam Satan on Chilling Adventures of Sabrina, Gomez deploys her menacing charisma to deliver a character viewers want to root for despite her likely dubious motivations. The show, Part 2 of which is streaming now on Netflix, was an instant hit when Part 1 debuted in October — Parts 3 and 4 have already been ordered — and it's introduced the Scotland-born’s mischievous charms to a new, predominantly American audience.

It's clear that the CAOS actor means it when she describes social media as "a place to play offstage." Everything, in Gomez's eyes, is a chance to perform, like a series of videos in which she interviews CAOS crew members about their jobs. (She can often be seen for a second at the beginning or end of an Instagram video calling "action" or "cut" for comedic effect.) "We are a very, very happy cast," she says of the mood on set. "I know that everybody curates their lifestyles for social media, but we genuinely enjoy each other."

But is she really having as much fun as it appears she is, or is it for show? "I am having an absolute blast, are you kidding me?" the 52-year-old actor exclaims. "The success I've had has come late in my career, and so I'm still unbelievably grateful that I'm even employed, right? Or that I'm standing on a set in the first place. I'm still blown away that I got the job, and so there's still so much joy in there for me."

After spending two decades in theater, Gomez broke into television in the early 2000s with roles on offbeat British sitcoms like The Book Group, Green Wing, and Bad Education. But although she exudes a comedic energy, Gomez claims that she didn't plan on her career heading in this direction.

"It just so happens that I'm funny, but I don't intend to be, and I'm always surprised when people find me funny," she says. "And I think maybe that's why it is funny, because I'm not going for laughs. It's just the situations my characters find themselves in are funny, and I'm in there being part of it." It's a curious thing to say for an actor who once performed a serious monologue about God while gesturing with comically long arms on Green Wing — but Gomez has a gift for keeping a straight face in the most absurd situations.

It makes sense, then, that she discovered her comedy chops by accident, when her 2000 performance as a Victorian ghost in Kate Atkinson's play Abandonment caught the eye of writer Annie Griffin. "She said it was one of the funniest performances she'd ever seen," the actor says. The only problem, however, was that Gomez wasn't trying to be funny at all. "It just sort of stung a bit, because I was young, and I didn't really know what I was doing, right? I wasn't really in control of the weaponry that I have or the tools that I had at the time." Thankfully, Griffin recognized her comedic timing, and Gomez ended up being cast in her cult British dramedy The Book Group.

I was blessed with this face. I was born to play witches and bitches until the day I die with this kind of structure.

That revelation and the following years opened up a whole new world of characters to Gomez — ones who are both fully batty and dead serious often at the same time, like Green Wing's Sue White and Miss Pickwell on Bad Education. It's even true of her buttoned-up-yet-unhinged impression of Mary Queen of Scots on Psychobitches.

"Comedy is born [of] truth and a kind of honesty," Gomez says, referring to what she learned from her conversation with Griffin. "And we find things funny because we relate to them. And so it's always a surprise to me — and it still is — [to be told I'm funny], because I don't come at anything with a comic bent, as it were. I come at it trying to tell that character's story, or to be part of the story that's being told."

The best villains are the ones who are more than simply terrifying — they can be charismatic, or funny, too, like Heath Ledger's Joker or Patrick Bateman from American Psycho. So it made sense when Gomez joined Doctor Who in 2014 as a deliciously wicked and initially mysterious character named Missy, who was later revealed to be the first female version of the series' iconic villain The Master. When her casting was announced, then-showrunner Steven Moffat told the BBC that Gomez was everything the show needed, because she's "brilliant, Scottish, and a tiny bit satanic."

Moffat was right, and her magnetic, hilarious performance garnered her a nomination at the 2016 BAFTA Awards. After that, Gomez went from one high-profile role to the next, wrapping up her Doctor Who arc mid-2017 before being cast on CAOS less than a year later. "[W]hen Doctor Who ended for me, I never thought I'd come across anything like that kind of loyalty again, in terms of a fanbase," Gomez says. "But here comes Sabrina, and there's such a huge appetite for it.” Indeed, it's safe to say that Gomez has received a warm welcome here in the States: She's already garnered her own coven of fans online who write articles singing her praises.

Though Gomez jokes that she's amazed she has more than five fans, she’s certainly found her niche in playing charismatic baddies with a comic bent. "I've gotten quite good at being evil but likable at the same time," she acknowledges. "Because I'm not really interested in playing somebody that is just thoroughly bad for no good reason. So for me, I'm investing a kind of empathy and a humanity to them." The secret, she says, is to make audiences like and trust you, which allows you to manipulate them. "Then you can pull the rug from under their feet."

While she's not usually literally doing that, the physicality of Gomez's performances, which can sometimes border on slapstick comedy, can make it feel that way. But she suggests that her physical appearance also contributes to her approach.

"I was blessed with this face," she says. "I was born to play witches and bitches until the day I die with this kind of structure.... I feel like I've grown into my face now, and I can make a virtue of that." She's not afraid to flaunt what she's got, either, which has led many of her characters, from Sue White to Missy to Madam Satan, to become their own unique kind of off-kilter sex symbols.

The key to putting her unique spin on the classic femme fatale villain, she says, is being comfortable in her own skin. "It never ceases to amaze me who I find attractive or who might find me attractive," Gomez says. "More often than not, it's about their personalities.... There are some people that are just really sexy regardless of what they look like." She tries to bring that spirit to all of her characters, "because I'm kind of funky-looking myself, so I kind of find it fun to bring some sort of version of attractiveness to whatever I'm doing."

Gomez's characters are typically self-possessed, radiating both an unflappable confidence and sexual charisma. In CAOS, Gomez seems to relish every line she delivers as Madam Satan, her diction almost a purr. Even her walk is a sultry, femme fatale strut, and it’s obvious that, while her character is self-serious, Gomez is loving every minute of playing her. But whether she's playing the Queen of Hell or Queen of Comedy, the actor says that these performances come from the same starting point. "I think of it as like, the same house but different curtains," she explains.

It's a testament to the actor's charisma that even as Madam Satan descends into hell on CAOS, you still somehow understand where she's coming from. But while this season had a dark, albeit triumphant ending for Madam Satan, Gomez is always having the time of her life. Which brings us back to all of that dancing she’s prone to. "I'll dance into my grave," she says. We'd be crazy not to follow her there.

Makeup by Mia Jones at The Wall Group