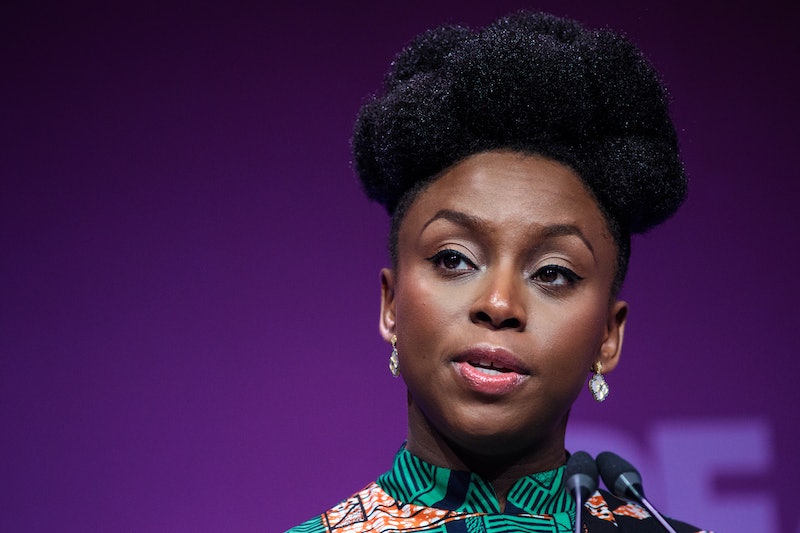 Author Chimamanda Ngozi Adichie has an important piece of advice for young women: "Don’t apologize." In the interview below, she explains why that advice is so necessary.

The interview with Adichie is an excerpt from Women: The National Geographic Image Collection, out later this month, which contains 400 glorious photographs, some dating as far back as the 19th century, as well as interviews with famous women, like primatologist Jane Goodall and Women's World Cup champion Alex Morgan. The book also tracks how depictions of women in the pages of National Geographic have changed since the magazine's founding in 1888. Women also features profiles on 17 of the female photographers behind the famed magazine's portraits of women.

The book is part of National Geographic's yearlong focus on women — a move that anticipates the 100th anniversary of the 19th Amendment, which gave white women the right to vote in 1920 — Women will be accompanied by the release of a documentary profiling many of the personalities featured within it.

Women: The National Geographic Image Collection is out on Oct. 15 and is available for pre-order now. Below, read an exclusive preview from the book — an interview with Chimamanda Ngozi Adichie:

In Conversation With Chimamanda Ngozi Adichie

"Unflinching, unswerving, fierce intellectual determination... to define the real truth of our lives": That’s the high bar that playwright Harold Pinter set for writers in his 2005 Nobel acceptance speech. They are also the criteria for awarding the annual PEN Pinter Prize, which in 2018 went to Chimamanda Ngozi Adichie. The Nigerian novelist and essayist — whose books include Purple Hibiscus, Half of a Yellow Sun, Americanah, and Dear Ijeawele — has received honors such as the National Book Critics Circle Award and a MacArthur Foundation “genius grant.” She’s a star to TED audiences; her 2012 TED Talk, "We Should All Be Feminists," was made into a book. In accepting the Pinter prize, Adichie noted that she’s been criticized for her stances: championing women’s rights, decrying Nigeria’s criminalization of homosexuality. A journalist advised Adichie that her fans might prefer that she “shut up and write.” To date, she shows no sign of doing the former, and every intention of continuing the latter.

National Geographic: What do you think is the most important challenge facing women today?

Chimamanda Ngozi Adichie: It’s really difficult to narrow it down to just one. I would say women’s autonomy over their bodies — and by this I mean a broad range of things. Not just reproductive rights, but including the scourge of domestic violence and also the lack of proper legal protection for women globally.

And what do you think is the most import­ant thing that needs to change for women in the next few years?

We need to have more women in positions of decision-making — politically, eco­nomically, in every way. More women’s repre­sentation will result in more diverse decisions, decisions that incorporate women’s experi­ences. I don’t think having women in positions of power means that the world is going to be perfect or that conflict will be eradicated. It just means that the concerns of half of the world’s population will finally be center stage.

"The world is not simple, so if you are familiar with things that are not simple, you’re more likely to deal with the world in a constructive way."

What do you think is your own greatest strength?

I think it’s maybe my ability to deal with complexity. That I am comfortable with gray, I don’t need for things to be white or black. I believe in nuance. I look at the world and know that it’s complex, and that things don’t have to be simple to be understood. And that I am not uncomfortable with things being complex and difficult. I think part of that is because of my socialization as a woman.

Could you say more about that?

When you look back through your life, is there something that you would consider a breakthrough moment?

I think it was when I was nine years old, in the third grade, and I remember this very clearly. My teacher had said that the child with the best results on the test that she gave would be the prefect. So I got the best result — and then she said, “Oh, I forgot to mention, it has to be a boy.” I just thought, “Why?” It would make sense to have said the class prefect has to be the child with the best grades or the child with some sort of useful skill. But the idea that this position of prestige and power in the classroom was reserved for some­body by an accident of being born a partic­ular sex — that was just strange. So my sense of righteous indignation flared up and I said to my teacher, “That makes no sense.”

You actually spoke up and said that?

Well, the boy still was prefect, and I was made the assistant prefect, which was not necessarily the solution I wanted. But for me it was really crystallizing: That was the first time that I spoke up about sexism. It didn’t work, but it was the moment for me that I don’t think I’ll ever forget.

I guess that leads to my next question: What do you think are the greatest hurdles that you’ve had to overcome?

I think maybe the fear of failure; not wanting to try because I was afraid I would fail.

Do you consider yourself a feminist?

Yes, I do very much, because I believe that men and women are equal as human beings, and I believe that sex should not be a reason to hold people back. We live in a world that has consistently held women back because they are women, and I feel very strongly that this needs to change. That’s what feminism means to me.

What living person do you most admire?

My father, because he is the best exam­ple that I have seen of a certain kind of integ­rity and decency. He is gentle and kind and he raised his children — the six of us, three boys and three girls — to believe that we could be or do anything. The confidence with which I occupy my space in the world is partly because I was raised by a man like him.

"Performing likability makes women diminish themselves; it means that you’re often not able to reach your potential because you’re not letting yourself really be yourself."

And is there a historical figure — some­body who is not living — that you might iden­tify with?

There are people that I admire; I don’t know about identifying with them, necessar­ily. I’m also deeply suspicious of stories of people, deeply suspicious of biographies, because I just think that we don’t really know people in the end. But I suppose I could say that I admire Winnie Mandela [anti-apartheid activist and ex-wife of South African president Nelson Mandela] for her resilience, for the way that she managed to hold her own despite a lot of unkindness that she had to deal with. I also admire writers like Rebecca West [born Cicily Fairfield] and Elizabeth Hardwick.

What advice would you give to young women today?

Don’t apologize. Again, back to that idea of socialization: I think women are social­ized to be apologetic just for existing, in many ways. And also, don’t perform likability. All humans like to be liked, because we are human — but girls are socialized to think that they need to be liked, and it makes them pretend to be what they’re not. Performing likability makes women diminish themselves; it means that you’re often not able to reach your potential because you’re not letting yourself really be yourself. I would say to young women, Don’t do it, because it’s not worth it. Young women should just be them­selves. It sounds simplistic, but I think it’s quite difficult, considering all the messages that society gives young women.

Last question: Where are you most at peace?

In my ancestral hometown in eastern Nigeria surrounded by family.

You can now order Women: The National Geographic Image Collection, out on Oct. 15.

More like this
24 History-Making Black Women You Probably Didn't Learn About In School
By Ayana Lage and JR Thorpe
25 Inspiring Quotes From Black Women To Celebrate Black History Month
By Kyli Rodriguez-Cayro and JR Thorpe
10 Equally Romantic & Heartbreaking Books From British & Irish Authors
By Shahed Ezaydi
Prince Harry Incorrectly Recites Christina Aguilera’s “Genie In A Bottle” Lyrics
By Jake Viswanath
Get Even More From Bustle — Sign Up For The Newsletter
From hair trends to relationship advice, our daily newsletter has everything you need to sound like a person who’s on TikTok, even if you aren’t.