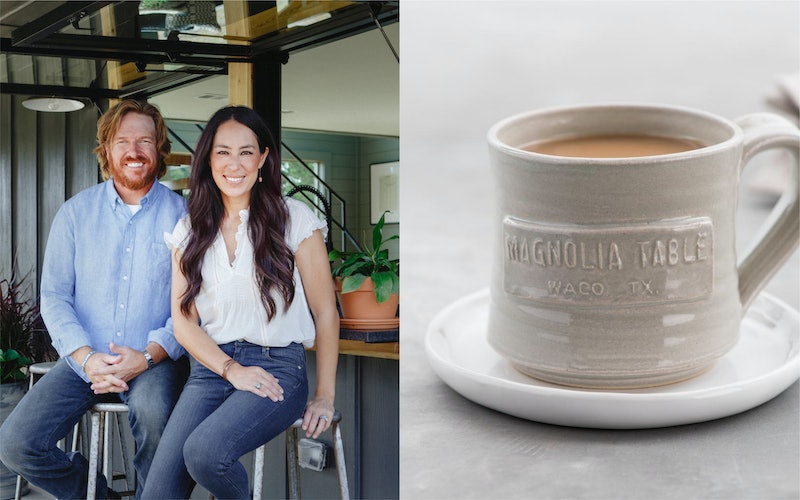 Fixer Upper fans and coffee fiends, unite! HGTV stars and IRL spouses Chip and Joanna Gaines are opening a coffee shop in Texas. While the details are still early, it’s safe to assume there will be plenty of espresso and probably shiplap. Also, if it’s like anything else the couple touches, it will be popular. You might want to book those future flights ASAP.

The yet-to-be-named coffee shop will be opening in Waco, Texas, according to the Waco Tribune-Herald. If you’re familiar with the Gaines’, you’ll know that’s where their Magnolia Market at the Silos is located. If you don’t speak fluent Gaines, Magnolia Market is the home and lifestyle shop the couple opened in 2015. It started as The Little Shop on Bosque in 2002. Since then, it has grown, been relocated, gotten renamed and renovated, and finally reopened and fully blossomed into the tourist hotspot in Waco it is today.

Starting in March, that empire will start expanding as they begin work on their new coffee shop. The coffee shop will be opening a block away from Magnolia market. (At 418 S. Eighth St. if, ya know, you want to start looking for Airbnbs close by.) Again, details are still in development, but we do know, according to the Tribune-Herald that a full-service coffee bar, freshly baked pastries, and an assortment of teas are all on early plans for the menu.

Aside from remodeling kitchens, this is not Joanna and Chip’s first food-related venture. Almost exactly a year ago, the Magnolia Table restaurant opened, feeding guests Monday through Saturday from 6 a.m. to 3 p.m. If you want to properly drool over the menu (and hypothesize what their coffee shop menu will entail), a few people have snagged pics of the food list. The couple also gave PEOPLE Magazine a peek at the menu.

The food is very breakfast and brunch-centric and it looks like there’s something for pretty much everyone. From avocado toast to lemon and lavender donut holes to a classic farm breakfast with eggs and bacon to Chip’s Ham Sandwich (which comes topped with scrambled eggs and served on a croissant), nobody is leaving this place hungry. There’s also a “Take Away” section which had ready-made sandwiches and snacks you can take to-go. Plus, it features gifts and souvenirs which are like dessert for your soul.

The restaurant doesn’t take reservations; you’re seated on a first-come, first-serve basis. That’s good and bad news for visitors looking to get a table. You’ll know that reservations won’t be booked out for months ... but it might take a while to get seated. Chances are the new coffee shop will function similarly. (Mostly because...I don’t think any coffee shop takes reservations?)

The opening date for the coffee shop is still TBD, but per the Waco Tribune-Herald, tentative plans put it at opening by the end of the year. (Again, it isn’t even built yet.) In the meantime, if you want to play Joanna and Chip’s coffee shop at home, it wouldn’t take too much imagination. The couple has a home and lifestyle line and you don’t even need to fly to Texas to shop it. There are multiple types of Magnolia Table mugs, which both already look like something you would’ve sneakily stolen from their recently announced coffee shop. You can get them online from $18 to $24. There are Magnolia Table tea towels, if you really want to turn your kitchen into sponsored content from the Gaines’. You can even display your baked goods on one of the various cake stands they sell.

Wherever will you get recipes for these decadent delights? Why, Joanna Gaines’ Magnolia Table cookbook, of course. You can try to perfect her chocolate chip cookie recipe while you wait for the coffee shop to open.