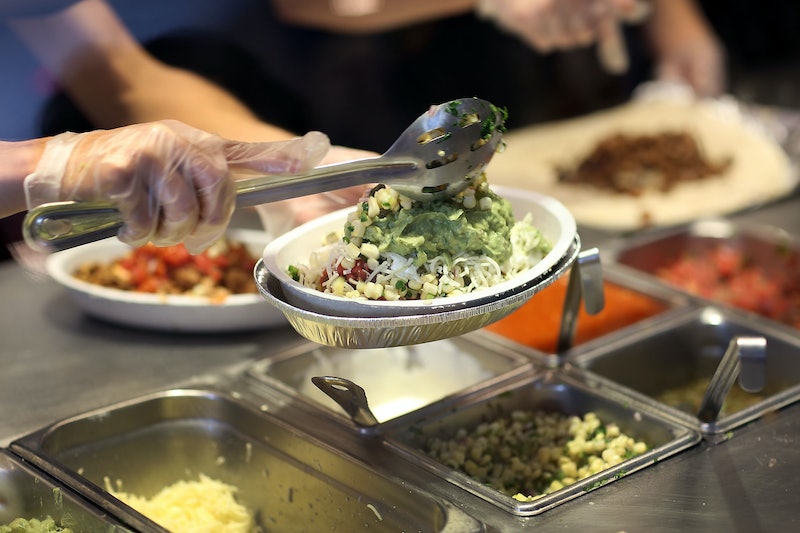 Getting food at Chipotle usually means standing in line and pointing at a bunch of things as they get piled into a massive tortilla that can barely close by the end. But if you'd rather skip that part and get your meal delivered straight to your car, there's good news for you: Chipotle is adding more drive-thrus, or Chipotlanes. (Their word, not mine.)

According to USA Today, the company announced during its fourth-quarter earnings call on Wednesday that a few dozen more Chipotlanes will be added in 2019. A Friday press release from Chipotle doesn't go into location specifics, but does explain, "The drive-up pickup lanes are currently in the test phase, which will be expanded to a few dozen of Chipotle's 2019 restaurant openings across several markets."

As you can see, the new Chipotlanes will be at new Chipotle locations rather than added to existing ones, we just don't know where those will be yet. Chipotle's press release notes that the company previously announced that it will open between 140 and 155 new restaurants this year. According to USA Today, there were 10 drive-thru test locations in Illinois, Indiana, Ohio, Tennessee, Texas, and Virginia.

The drive-thru at Chipotle isn't a normal drive-thru; you have to order online or via the chain's app. Forbes reports that after an order is sent in, customers are given a time to pull up to the pick-up window and get their food. Chipotle has been seeing growth in digital sales that it surely hopes continues with the introduction of more Chipotlanes. Digital sales were up 42.4 percent in 2018 compared to 2017 and accounted for 10.9 percent of sales.

The Chipotlane expansion isn't the only big thing Chipotle has planned for 2019. The brand will also be introducing Chipotle Rewards nationwide. Currently, the program is being tested in Kansas City, Missouri and Kansas, Phoenix, Arizona, and Columbus, Ohio. But, since the program will expand eventually, you can already sign up for an account and get updates. With the program, customers can earn points each time they order on the app, online, or in a restaurant, and when they reach a certain amount, they get a free meal. At least in the test, the brand is also giving extra points for orders placed online or via the app. You can also complete "bonuses" to get points faster, and, when the program was announced the brand said the it could include "delighting customers on their birthdays."

Chipotle also promoted app ordering with the introduction of some new menu items in January. The chain started offering "Lifestyle Bowls" — pre-determined combinations for those who follow the requirements for Keto, Paleo, and Whole30 diets, as well as a Double Protein Bowl.

Since the Chipotlanes and rewards program are still in the test areas, anyone not in one of those cities who is craving Chipotle will have to get it the old fashioned way for now. But just know, soon you won't have to point at salsas and be told "guacamole is extra" — if you don't want to.