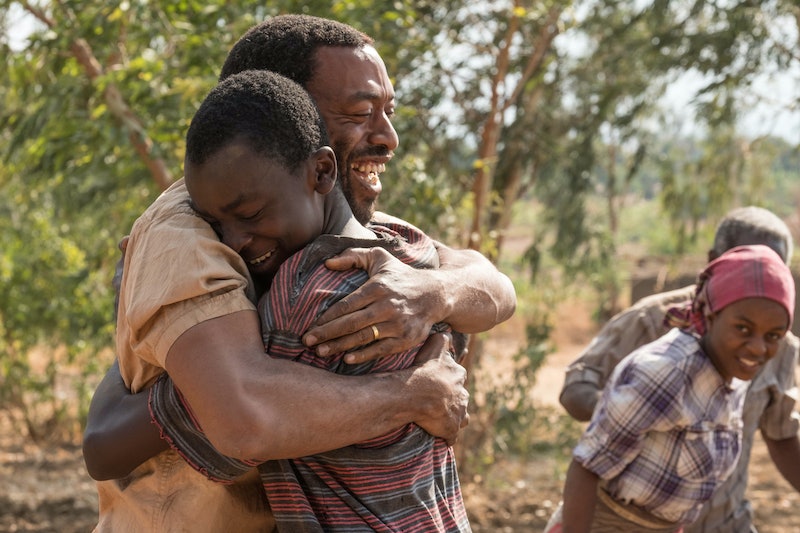 When I meet Oscar-nominated actor and first-time feature director Chiwetel Ejiofor in the Ludlow Hotel in New York City, he's bypassed the couch and pulled up a chair identical to the one where I'm meant to sit. The other setup felt weird, he says. Because it's difficult to have a meaningful conversation with someone when you're at different levels. It's a handy seating metaphor for the philosophy that the British-Nigerian artist brought to his directorial debut, The Boy Who Harnessed The Wind, out on Netflix on Mar. 1. He wanted to invite audiences into his biopic of teenage inventor William Kamkwamba, following the boy around his Malawian village, from the house where he lives with his family to the school his parents can barely afford to the fields that are barren due to a devastating lack of rain. And by embedding the viewers so authentically in that world, Ejiofor is telling an African story — a true African story — that has a grand scale. It's something he's not used to seeing explored in Western film.

"[Africans] are empowered and strong and interesting and dynamic people who go through a lot of the same journeys that we all go through, in terms of interpersonal dynamics, our relationships with our families, our wants and needs and all of those things — but can also sometimes go on these very epic journeys, these big journeys," he says. "They are a part of that tradition."

Kamkwamba's epic journey arguably began when the boy picked up a library book about generating electricity. He taught himself how to build windmills to harness energy and irrigate crops, saving a countless number of lives. The 12 Years a Slave star spent 10 years working to bring that story, adapted from the inventor's memoir, to the screen. Though Ejiofor says that he wasn't frustrated by the long development period.

"It didn't feel long, in a way," he says. Working on other projects allowed him to bring new artistic and life experiences to his script in progress, to slowly bring on collaborators who were invested in doing it right, and to travel back and forth to Malawi, meeting with Kamkwamba, his family, and the surrounding community. Spending a decade with the project allowed the filmmaker to "settle deeply into the characters, into the story," and give the film a "lived-in" quality.

"By the later drafts of the script, I had such deep knowledge of the topography, the geography of Kasungu [the district] and Wimbe [the village], that I could be back in London writing the script and just totally envisaging how we’re visually going to represent it and which angles would be better and all of these things," he says. "And that sense of really understanding a place was kind of invaluable in the end."

According to Wikipedia, only two other movies have ever been filmed in Malawi, so Ejiofor was very conscious of the stir that could be caused by "the circus coming to town." But he says that he found that everyone in the community wanted "to be part of telling the story" and were quick to share their own personal remembrances from the tougher times depicted in the film. The team would see Kamkwamba's mother Agnes and father Trywell (who Ejiofor plays in the film) almost every day when they were shooting near their home. Being immersed in Kamkwamba's life only increased the filmmaker's sense of responsibility.

"I don’t know if it was a challenge, exactly, but it sort of focused the nature of what we were doing," he explains.

The actor who would play William was a vital piece of the puzzle. Kids in schools across the continent auditioned for the part, which was eventually won by Nairobian Maxwell Simba, who had no experience beyond a few school plays. "I was very stunned when I saw his tape," Ejiofor says, "because he had that very unique quality — this capacity to do very little but communicate a large amount." The relationship between father and son is key to the film, and the filmmaker says that "if nothing else," his choice to play Trywell was worth it for him and Simba to have an "pure link" throughout filming, with Ejiofor as both his director and his frequent scene partner.

Simba learned the Bantu language Chichewa for the part; both it and English are spoken in the film, realistically depicting the way Malawians transition from home to school and other spaces. Ejiofor calls the use of language a "teleportation experience" for viewers, breaking down another barrier between them and the characters they're watching. "You don’t go into a village in an African country and see people discussing the school fees and how they met and the circumstances of their lives in this way, in these very intimate private conversations," he says, adding that "those dynamics are happening all over the continent and all over the diaspora all over the world." Having all of the dialogue in English, he reasons, would have had the effect of making an audience feel "removed' or "manipulated." What he wanted to do was present another opportunity to connect.

"Audiences are looking for richer experiences," he says. "That’s the charge and the challenge of diversity in cinema, is to present world views and viewpoints and continue to enrich the landscape of the arts." It's something that Ejiofor took away from Sunday night's Oscar ceremony — "the spectrum of storytelling available," and how distributors like Netflix can contribute to even more varied offerings in the future. His Children of Men director Alfonso Cuarón's Roma, which also premiered on the streaming service, offered viewers a "really beautiful internal point of view of a place and a space and a family that you may have had very limited connection with, and certainly the historical dynamics have had very limited connection with," he says. Ejiofor was also struck by the unexpected POV of The Favourite, an early 18th century period piece where "the guys going to war is the last thing that you’re thinking about."

The Boy Who Harnessed The Wind is a part of that tradition — a carefully told true story about education, innovation, and family that welcomes audiences wholeheartedly into a place they've probably never seen.

More like this
In 'The White Lotus,' Leo Woodall Gets His Moment
By Gabrielle Bondi
Elizabeth Debicki On Her Approach To The Most Debated Scene From 'The Crown'
By Grace Wehniainen
Yes, That's Lindsay Lohan's Sister Singing In The 'Falling For Christmas' Movie
By Radhika Menon
How To Stream 'White Noise' On Netflix
By Grace Wehniainen
Get Even More From Bustle — Sign Up For The Newsletter