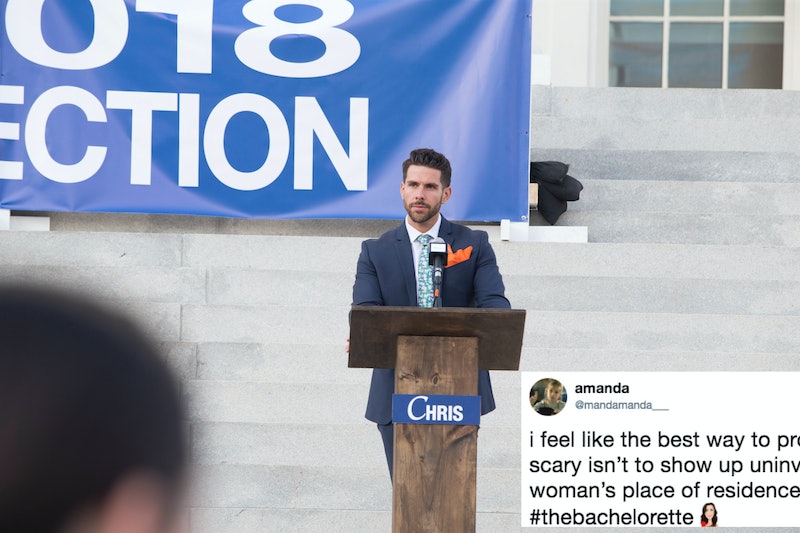 Watching The Bachelorette is painful sometimes, and watching if you're a feminist can be even worse. But still, we beat on, boats against the current, borne back ceaselessly into the past... or Monday nights on ABC. And while most of us can suspend our disbelief for long enough to enjoy the bananas antics of The Bachelorette, there was one tweet that summed up how many women felt about Chris' behavior on the July 2 episode of The Bachelorette.

When a contestant cries about not getting a one-on-one date or whines about being interrupted during a cocktail party, that's a red flag. After all, contestants should know by now how a long-running franchise works, and what traps they should avoid. When a contestant thinks that the Bachelor or Bachelorette should be pursuing him or her instead of the other way around, that's a red flag. Both are also sure signs that the person in question may not be there for the right reasons — in the case of Becca's season of The Bachelorette, that person is Chris R. He came in looking like Danny from New Kids On The Block, but he came out of The Bachelorette looking like a straight-up chump.

Chris is one of those guys who protests too much, and whether it was him thinking that Becca should hang out with him only during group dates, telling her she owed him "50,000 kisses," or fighting with Lincoln over who was sadder that he didn't get a one-on-one date, Chris was a lot. He was a certified Nice Guy, and his constant defense made him look even less suitable as a partner. Chris' insistence on him being great for Becca came to a head when he decided to visit Becca, uninvited, in her Virginia hotel room. That's when this amazingly true tweet came into play:

Lincoln and Chris hadn't been getting along all episode, and with that, Lincoln had been spreading some rumors around that Chris was unhinged and that the other men on The Bachelorette didn't feel safe around him. Was it a bit of a stretch? Maybe, at first. But in trying to clear his name, Chris made himself look so much worse. Becca didn't want him there in her room, and Chris' constant arguments that he and Becca ultimately did belong together made him seem like his head was going to spin off like a top and explode. The disgust on Becca's face was palpable, and she opted, after letting him say his piece (I think so, at least — I'm pretty sure I blacked out for a lot of it), to send him packing. Chris, in true Chris fashion, was not happy.

The thing about Chris is that while, yes, the producers and The Bachelorette do have final say over how a contestant is edited, they cannot edit together footage that never happened. If Chris really acted the way he did on the show, it's no wonder that Becca was uncomfortable around him and wanted him to go home. And it's not even about his relationship with the other men on The Bachelorette — Chris was initially gung-ho about Becca pursuing him when the whole purpose of this show is for 30 men to follow Becca around, but something changed when he tried and failed to switch up his game and make Becca come to him. A man who's that demanding of a woman's time is, as the tweet above states, one to watch out for — it means that if he's like this when you're not really dating, what happens when you are? How much time does a guy like Chris need? Becca dodged this Chris bullet, and maybe next time, he'll learn not to be so demanding in his relationships. Especially the reality television ones.