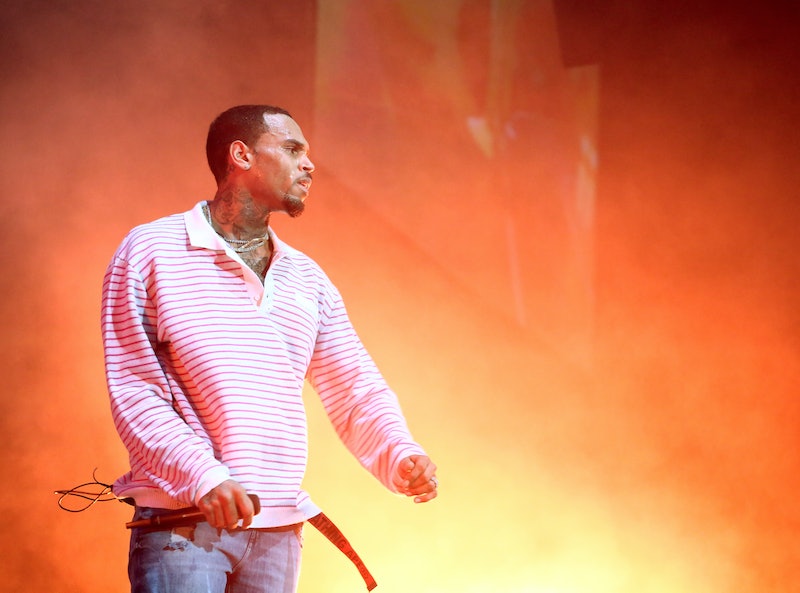 Brown had performed at the Coral Sky Amphitheatre in West Palm Beach on Thursday night. E! Online reported that authorities were waiting in the wings of the venue to arrest Brown after the concert for an outstanding warrant from 2017. Brown was arrested and booked, but the "Pills & Automobiles" singer was released from custody by 11:52 p.m. After his arrest, Brown took to Instagram where he shared a photo of him performing onstage and wrote, "What's NEW????? Show tomorrow!!!!" with the eye roll and heart emojis. His next concert date is in Tampa on July 6 at the MIDFLORIDA Credit Union Amphitheatre before he travels to Alabama and then makes his way up the East Coast.

The West Palm Beach NBC affiliate WPTV reported that the battery warrant is from April 2017 when Brown allegedly punched a photographer in a club. At the time, Tampa Bay Times reported that Brown was at the Tampa nightclub AJA Channelside for a post-concert event. He was scheduled to appear for at least an hour, but club photographer Bennie L. Vines Jr. told police that Brown "sucker punched" him almost immediately after arriving and then left.

On its Facebook page, AJA Channelside addressed the incident. "After only a few minutes of being there, Chris Brown himself and his team assaulted our club photographer and proceeded to walk out of the venue. AJA Channelside and our employees apologize for the inconvenience. Assault charges were pressed and we are dealing with the proper authorities accordingly," the post stated.

As Tampa Bay Times noted, this isn't the first time Brown has had legal issues with a Florida photographer. St. Petersburg photographer Luis Santana sued Brown and then-girlfriend Rihanna in December 2008, alleging that their bodyguards beat him and broke his camera, Today reported. Brown's lawyer denied that the performer or his bodyguards were involved.

Just a couple months after that lawsuit, Brown was arrested in February 2009 for his assault of Rihanna before the Grammys. CNN reported that Brown admitted his guilt in a plea deal and he was sentenced to five years probation and more than 1,400 hours community service in August 2009. Court documents revealed that there had been two unreported incidents of domestic violence against Rihanna prior to the February assault. But the music stars later reconciled and dated again, before eventually splitting for good.

Brown has faced plenty of other legal issues, specifically dealing with assault. He pleaded guilty in 2014 to assaulting a man in Washington, D.C., while he was still on probation for the Rihanna incident. In 2016, he was arrested and charged with assault with a deadly weapon after a standoff with police. And a judge granted Brown's ex-girlfriend Karrueche Tran a five-year restraining order against him in 2017. Tran claimed that Brown had threatened her with physical violence after their breakup and she alleged that he abused her during their relationship, according to People.

Besides his one Instagram post, Brown hasn't commented publicly on his most recent arrest. But now that he's out of custody, his Heartbreak on a Full Moon tour appears to be moving ahead as scheduled — for now.

More like this
A New Netflix Doc Will Explore The Unsolved Murder Of Jill Dando
By Sam Ramsden
Austin Butler Recalls Lisa Marie Presley Showing Him Elvis’ Bedroom
By Jake Viswanath
Linda Ronstadt’s “Long Long Time” Plays A Pivotal Role In The Last Of Us
By Brad Witter
Jameela Jamil Defends Sam Smith After Trolls Body-Shamed Them
By Jake Viswanath
Get Even More From Bustle — Sign Up For The Newsletter
From hair trends to relationship advice, our daily newsletter has everything you need to sound like a person who’s on TikTok, even if you aren’t.