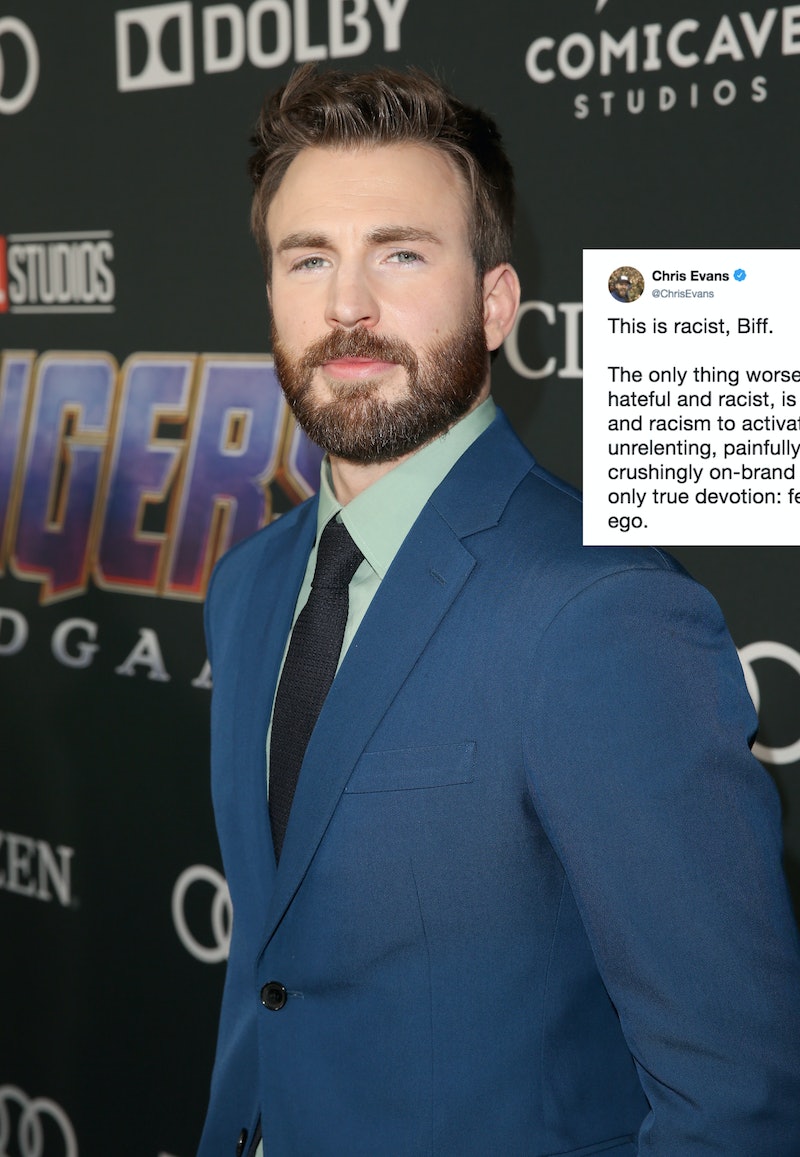 Captain America doesn't let injustice or hate go unchecked, and neither does the actor who plays him. On Monday, July 15, Chris Evans called out Donald Trump's recent tweets for being "hateful and racist," and the response was truly in the spirit of Captain America. Over the weekend on Sunday, June 14, Trump posted a series of tweets about "Progressive Democrat Congresswomen," including telling them to "go back" to other countries, and quickly sparked plenty of backlash.

While Trump's tweets did not name the congresswomen explicitly, a group of Democrats in Congress, who are all women of color, have recently condemned border detention facilities and have repeatedly spoken out against his immigration policies. That includes Alexandria Ocasio-Cortez, Rashida Tlaib, Ilhan Omar, and Ayanna Pressley, as noted by CNN. The president wrote, in part:

"So interesting to see 'Progressive' Democrat Congresswomen, who originally came from countries whose governments are a complete and total catastrophe, the worst, most corrupt and inept anywhere in the world (if they even have a functioning government at all), now loudly [...] and viciously telling the people of the United States, the greatest and most powerful Nation on earth, how our government is to be run. Why don’t they go back and help fix the totally broken and crime infested places from which they came. Then come back and show us how [...] it is done. These places need your help badly, you can’t leave fast enough. I’m sure that Nancy Pelosi would be very happy to quickly work out free travel arrangements!"

Evans was among the many who were outraged by Trump's words and took to Twitter to speak out:

"This is racist, Biff. The only thing worse than actually being hateful and racist, is casually wielding hate and racism to activate your base in an unrelenting, painfully transparent, and crushingly on-brand effort to soothe your only true devotion: feeding your insatiable ego."

The actor using the name Biff is likely a reference to the Back To The Future villain, a bully who is ultimately is revealed to be a coward.

In the replies, many fans thanked Evans for taking a stand against the hateful language. One user wrote back, "you're absolutely right please continue to call out his racism," while another user replied telling Evans to run for president.

Evans wasn't the only celebrity to speak out against Trump's tweets over the weekend. Queer Eye's Karamo Brown tweeted his opposition as well, writing: "Our #RacistInChief just told four American Congresswomen 'go back to their countries...' Immigrants & their children are the heart of our country." Director Ava DuVernay posted a picture of the congresswomen and wrote, "Saluting these women. Stay pushing. Stay shining. Stay working. Stay a pain in the ass of the #RacistInChief and all his co-horts. Stay true to who you are. Stay safe. Stay together. Stay making us proud. #FourQueens."

The congresswomen referenced in the president's tweets also called out the rhetoric on social media. On Sunday, Alexandria Ocasio-Cortez responded to Trump on Twitter. She wrote:

"Mr. President, the country I 'come from,' & the country we all swear to, is the United States. But given how you’ve destroyed our border with inhumane camps, all at a benefit to you & the corps who profit off them, you are absolutely right about the corruption laid at your feet."

Just like AOC, Evans is super active on Twitter. He's been using the platform to oppose the president's policies since 2016. On July 4, Evans tweeted about standing against tyranny and being on the right side of history. He wrote,

"Happy 4th of July! A day that represents courage in the face of tyranny. Take a moment today to question how history will look back on this chapter. Time brings truth into focus. This period of fear, hate, lies and complicity will be studied by generations to come."

The Avengers: End Game star has also emphasized how opposing hate is a major tenant of patriotism. In March, Evans said he feels a responsibility to fight injustice in the wake of the current political landscape, and that includes being vocal online, as reported by The Hollywood Reporter. "I'd be disappointed in myself if I didn't speak up," he said. "Especially for fear of some monetary repercussion or career damage - that just feels really gross to me."

Marvel President Kevin Feige also considers Evans' advocacy as being very much in the spirit of Captain America. In an interview in March 2019, Feige said he encourages Evans' online presence, as per THR. "I see it as very astute, very honorable, very noble, very Cap-like," he said. "Commentary and questioning. I've said to him, 'You're merging! You and the character are merging!'"

Just like his onscreen counterpart, Evans isn't afraid to stand strong in the face of injustice. He wasn't the the only person speak out against Trump's hateful posts, but his response demonstrates his continued commitment to the fight for equality.

More like this
Man Meets Politics: ‘Boy Meets World’ Star Ben Savage Is Running For Congress
By Jake Viswanath
'The Queen’s Gambit' Season 2 Tweet Wasn’t From Anya Taylor-Joy
By Mary Kate McGrath, Jack Irvin and Grace Wehniainen
'Wednesday' Star Emma Myers Thinks A Wenclair Storyline Is “Possible” In Season 2
By Alyssa Lapid
Ashton Kutcher Wants Danny Masterson “To Be Found Innocent” In Rape Retrial
By Jake Viswanath
Get Even More From Bustle — Sign Up For The Newsletter
From hair trends to relationship advice, our daily newsletter has everything you need to sound like a person who’s on TikTok, even if you aren’t.