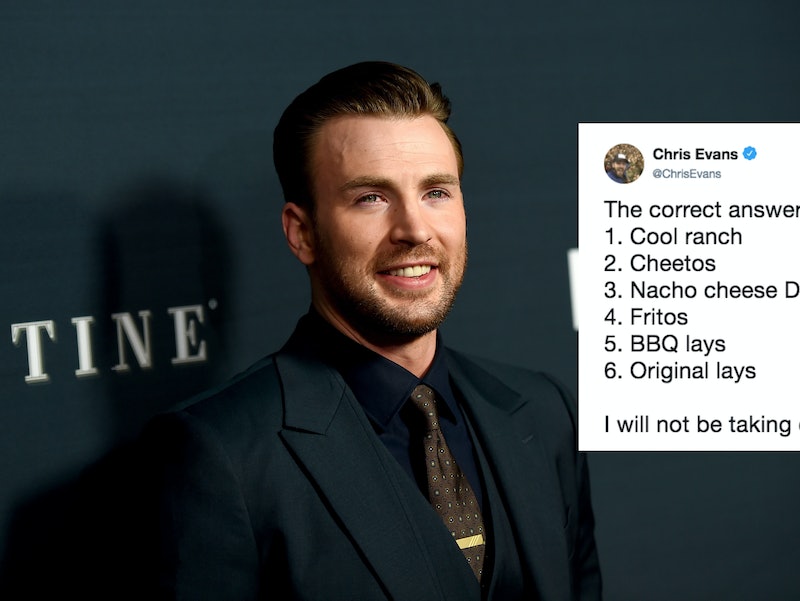 Over the course of our lifetime, we will bear witness to many important debates. In fact, we've already witnessed a few notable debates just over the course of the last several years. For example: Is the dress blue or gold? Do you hear "laurel" or "yanny"? Now, Chris Evans has ranked the best chips on Twitter, and people are — as to be expected — divided. They should've seen this coming, though.

It all started on March 10, when Twitter user @KevOnStage shared a video that resulted in quite a quandary. The clip featured a shot of a variety pack of snack-sized chips. Included in the box were: plain Lays, Doritos, Cheetos, Fritos, BBQ Lays, and Cool Ranch Doritos.

The question at hand was, "What is the correct way to rank these chips [from best to worst]?" The first person in the video went with: Doritos, Fritos, Cheetos, plain Lays, BBQ Lays, and Cool Ranch Doritos. In the background, you can already hear an — understandable, in my opinion — uproar from the fact that this person ranked Cool Ranch last.

The other participants' opinions varied, and the whole thing got pretty hilariously heated. Everyone had their reasons for their rankings, but when Evans chimed in with his reply on Twitter, he refused to offer an explanation. He was confident in his choices. And why wouldn't he be? He's Captain American. He wins, period.

His followers' comments were predictably mixed. Some fans saw his ranking as alarmingly audacious. "Look, you're fine and all, but I will fight you for having Nacho Cheese Doritos 3rd after Cool Ranch and Cheetos. Cheetos though?! Really?! #ChipGate," one person exclaimed. "truly despicable ranking of the given options," another user wrote. "Cheetos above nacho cheese Doritos? How dare you. I say good day to you Sir," a third fan grumbled.

Now, on the other hand, there were a surprising number of fans that either agreed with Evans entirely or seemed relatively unfazed by his choices. The reason for this being, they knew he stanned Cool Ranch Doritos all along.

First of all, back in 2014, some fans on Tumblr began drawing the comparison that Evans' jacked body resembled a Dorito, as per Io9. In fact, the meme spread so quickly that even his co-star, Robert Downey Jr. (who plays Iron Man), endearingly referred to Evans as "Dorito" in *two* separate interviews that year.

Furthermore, in 2015, Evans — as Captain America — ended up appearing on an actual bag of Cool Ranch Doritos. Several of the Avengers appeared on the snacks as promotion for Age of Ultron, but Evans' character on the bag of Cool Ranch indicated that the fans were right all along: He is a walking, talking, human Dorito.

Evans expressed his own excitement about being featured on that bag, in particular, in a tweet from that same year. "I'm on a bag of Doritos #lifegoals," he wrote.

Clearly, the evidence of his preference has been there all along. Long before the Great Chip Debate of 2019 even came about. So, while some fans might not agree with his decision, they can't say that they never saw it coming.