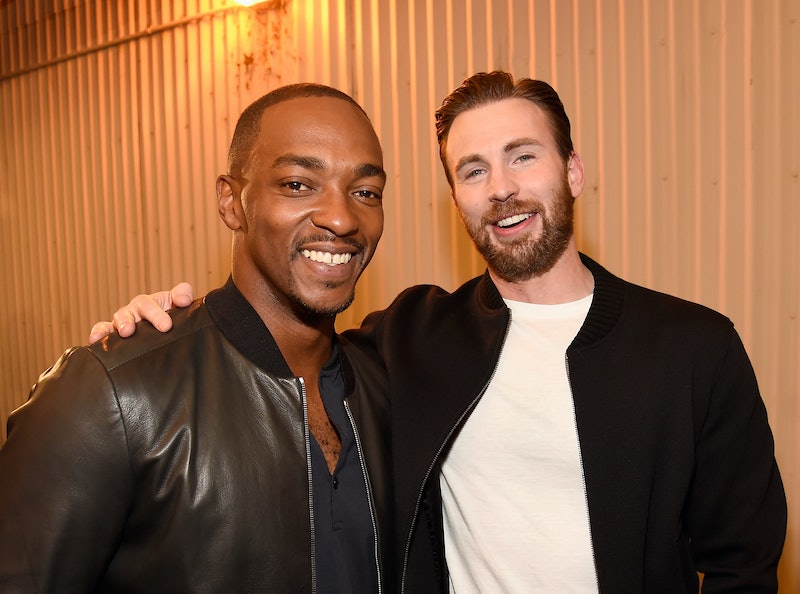 Captain America may have super strength, but even the mightiest of superheroes are powerless against a good secret. While making an appearance on Monday's The Tonight Show Starring Jimmy Fallon, Chris Evans confessed he spoiled Endgame for Anthony Mackie. And just not any old part of the story — the special moment at the end of the film between Cap and Mackie's Marvel character, Falcon.

Evidently, Evans had a chance to read the script ahead of Mackie and accidentally let it slip that Captain America ultimately decides to pass his shield down to his close friend and comrade in arms. “While we were filming in Atlanta, I had a few people over to watch football or something, and Mackie was the first one to show up,” Evans explained to Fallon. "“I didn’t know he didn’t know what was going to happen. I say, ‘Hey, man, isn’t that scene fantastic?’ and he said, ‘What scene?’ And I said, ‘The scene where I give you the shield!’ And he said, ‘You’re giving me the shield?’"

At first, Evans felt terrible that he had potentially ruined such a pivotal moment for his costar, but in true Cap fashion he ended up saving the day once again. The actor immediately pulled the script out and got to watch Mackie read the scene for the very first time. "It was so nice to share it with him," Evans recalled. "He was so happy and so deserving. It was a nice way to have — just between us — the transition of characters.”

Mackie has a slightly different memory of how it all went down. In an interview with Men's Health earlier this year, he told his version of how he found out Falcon would become the new Captain America. “Chris gets the look of a six-year-old kid on his face, runs away, and comes back with the script,” Mackie said. “I’m reading it, and it dawns on me what’s happening.”

Regardless of how it all played out, it's clear there are no hard feelings between the two of them and that it meant a great deal to both of them to be able to share that moment together. But while Evans' Marvel journey has (seemingly) come to a close, Mackie's is far from over. In fact, the actor just recently announced on Instagram alongside Sebastian Stan that production on the Disney+ live-action Marvel series The Falcon and The Winter Soldier is officially underway. And despite the fact that the two of them may need to working on their synchronization a bit, it seems the two of them are already having a great time if this initial announcement is any indication.

The series is set to debut in Fall 2020, and will likely tackle Falcon's transition to becoming Captain America. Maybe Evans will get lucky and get some spoilers for himself this time.

More like this
Anne Hathaway Shared A "Thrilling" 'Princess Diaries 3' Update
By Darshita Goyal
The 'Scream 6' Trailer Shows Off Hayden Panettiere's Return & Ghostface In NYC
By Jack Irvin and Jake Viswanath
Rupert Grint Just Shared A *Major* Update About Ron Weasley’s Future
By El Hunt
'Friends' Star Maggie Wheeler Offers Support To Matthew Perry After Reading His Memoir
By Alyssa Lapid
Get Even More From Bustle — Sign Up For The Newsletter
From hair trends to relationship advice, our daily newsletter has everything you need to sound like a person who’s on TikTok, even if you aren’t.