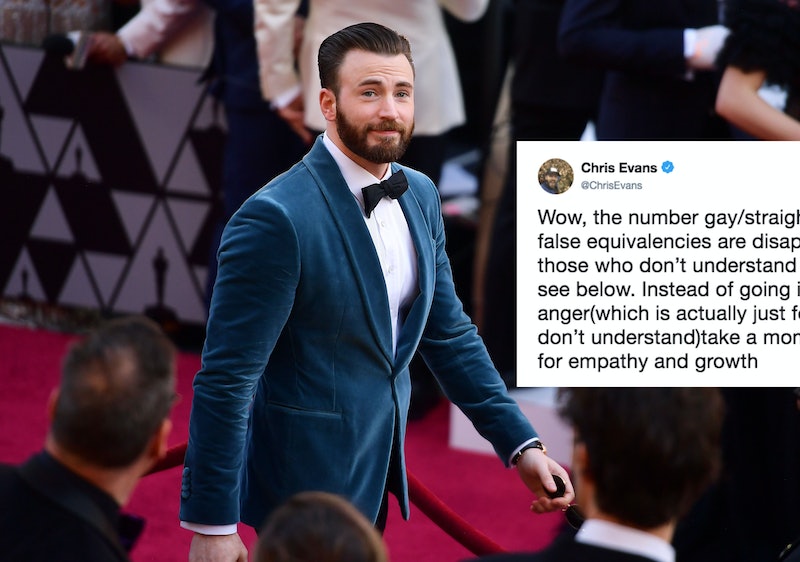 Now that June has begun, it's officially Pride Month and celebrities are already showing support for the LGBTQ+ community in a number of ways, like Taylor Swift's letter in support of the Equality Act or Mariah Carey's Pride-themed merch. Another such celebrity is Captain America himself: Chris Evans responded to the "Straight Pride Parade" started by a group in Massachusetts, which is also his home state, by pointing out how ridiculous the idea actually is.

While Pride Month is meant to be a celebration filled with joy and love, it seems like some people have plans to rain on that parade — with their own actual parade. According to The Washington Post, three Boston men are planning a "Straight Pride Parade" for August, in reaction to what they call "heterophobia." They have reportedly chosen Brad Pitt as their "mascot" for unclear reasons. While Pitt has not publicly commented on the parade as of yet, Evans did not hold back on Twitter.

In the first of two tweets, the Marvel actor responded to the news of the parade with palpable sarcasm, suggesting that their actions were born out of "trying to bury [their] own gay thoughts" and an inability to properly express their feelings.

"Wow!" Evans wrote. "Cool initiative, fellas!! Just a thought, instead of ‘Straight Pride’ parade, how about this: The ‘desperately trying to bury our own gay thoughts by being homophobic because no one taught us how to access our emotions as children’ parade? Whatta ya think? Too on the nose??"

Fans were ecstatic that Evans had spoken out against the concept of "Straight Pride," prompting the creation of many memes — including the continuation of the acrylic nails meme that has been going around Twitter recently, as well as a few Captain America comparisons.

While it's great to see Evans using his voice and his platform to support the LGBTQ community, some also rightfully pointed out the harm in perpetuating the false stereotype that homophobia stems from repressed homosexuality. This narrative implies that members of the LGBTQ community are essentially responsible for their own oppression, when in reality it has more to do with the culture they grow up in.

Evans hasn't responded to this particular criticism, but he did follow up his initial tweet with a second one that had a more serious tone. He called for those in support of "straight pride" to have empathy for the LGBTQ community, and wrote that anger is "actually just fear of what you don't understand."

Evans pointed to writer James Fell's response to the parade as an explanation for why "Straight Pride" does not have the same meaning as LGBTQ Pride, and why the idea of "Straight Pride" is ridiculous.

This is not Evans' first time speaking out in support of the LGBTQ community. He advocated for legalizing same-sex marriage in an interview with Playboy while promoting The Avengers way back in 2012; used his Twitter to call attention to a report that children of LGBT parents may face U.S. citizenship problems; and spoke in a 2016 interview with TheFIX about how growing up in a progressive community taught him to listen to those with marginalized identities, including his younger brother Scott, who identifies as gay.

Evans' frustration reflects the overwhelming response on Twitter to the news of the parade — by LGBTQ leaders and straight allies alike. And if these tweets are any indication, it looks like Evans plans to continue using his platform and privilege to speak out in support of the LGBTQ community.

More like this
Rylan Clark Is Ready To Party
By Sam Ramsden
Travis Alabanza On Not Fitting In
By Sam Ramsden
Demi Lovato, Jessica Chastain & More Stars Celebrated The 4th Of July By Protesting
By Jake Viswanath
Prince William & Lorraine Kelly Lead Tributes To “Truly Remarkable” Dame Deborah James
By Sam Ramsden
Get Even More From Bustle — Sign Up For The Newsletter