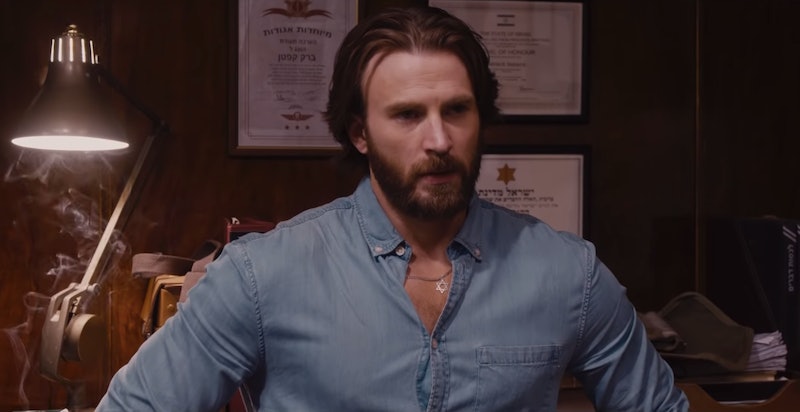 In his new Netflix movie, Chris Evans goes from playing the newly clean-shaven, all-American soldier Steve Rogers to playing the rugged, risk-taking Israeli Mossad agent Ari Levinson in The Red Sea Diving Resort, premiering July 31. And though the film is based on true events that occurred in the late '70s and early '80s, when a group of Israeli secret-service agents used a fake hotel to move Ethiopian Jewish refugees from Sudan and into safety in Israel, Chris Evans's character in The Red Sea Diving Resort is not based on one real, specific person.

In the film, Ari is the leader of a group of spies sent by the Prime Minister of Israel to smuggle thousands of oppressed Ethiopian Jews by way of a diving resort, which they use as a front for their secret humanitarian operation. And though Levinson isn't a real historical figure, Israeli writer/director Gideon Raff based the film on personal accounts from the actual Mossad agents who participated in the mission.

One of the consultants for the film was Daniel Limor, the leader of the mission dubbed "Operation Brothers," which was executed from 1981 to 1985. It's likely that Evans's character was partially based on Limor. According to The Times of Israel, he spotted the abandoned resort built by Italian entrepreneurs in the 1970s while he was out diving. "It’s something that just fell from the sky," he told the publication.

The resort had no electricity, water supply, or even a proper road, which is why it never opened. But the BBC reports that the agents, who used fake passports and posed as employees of a Swiss operating company, went to Sudan and were able to convince the authorities with their business proposition. They rented the village for three years for $320,000.

Another source that could have been used in making the film is a biographical novel entitled Mossad Exodus: The Daring Undercover Rescue Of The Lost Jewish Tribe was written by Gad Shimron. Shimron was also one of the actual Mossad agents who played a critical role on the mission to rescue the Ethiopian Jews. "I’m very happy the story has been revived and brought back from the dead," the author tells Israeli newspaper Haaretz. He also noted that he’s “fairly sure” it was his book that inspired director Raff to tell the story.

Shimron wrote his book from his own perspective, and it reads like an actual spy novel, following his teammates and himself as the protagonists. “It was the experience of a lifetime,” he told Haaretz. “So much happened: We were shot at; I was arrested and interrogated by Sudanese security. Thank goodness nobody was killed or seriously wounded, but the operations moving the immigrants were definitely dangerous.”

Naturally, the stakes were highest for the refugees. In the trailer for the film, Ethiopian Kabede Bimro (Michael Kenneth Williams) says, "It is not a mission for me. This is my life." "They were attacked, raped, robbed," Limor recalled to The Times. "They suffered. They also died in the refugee camps."

And so beyond the film's story told from a "Zionist James Bond" perspective, as Shimron put it, there's so much more to Operation Brothers than the Netflix film will be able to present. The film also runs the risk of portraying the "white savior" trope, as it appears that the refugees themselves serve as supporting voices in this narrative, with the story of Ethiopian refugees walking hundred of miles in order to make it to Sudan being secondary to the resort front.

Miki Achihon, an Ethiopian Jewish student at the time was one of the refugees, emphasizes that the Ethiopian activists' efforts also shouldn't be forgotten. "We were the eyes, the ears and the feet of the Mossad," Achihon told The Times. "We did it for our people."

At the end of the day, the film won't be a historically accurate account, and its characters — including Evans's — are imagined. But hopefully The Red Sea Diving Resort stays true to the experiences of those who actually lived through the Mossad exodus.