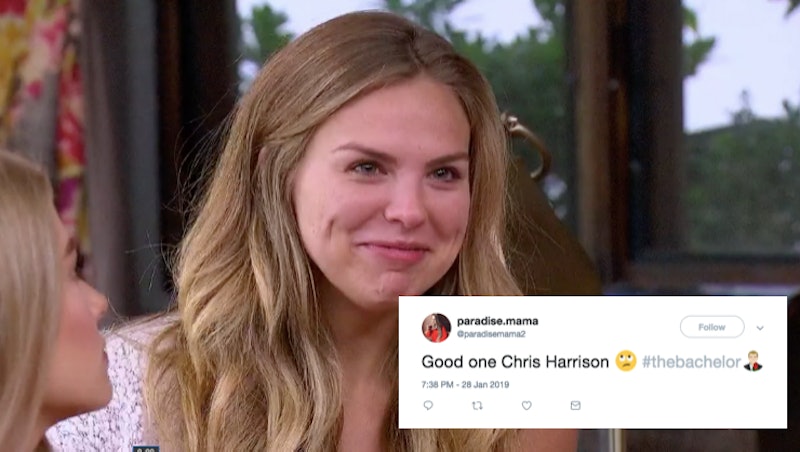 Just in case you thought the pageant queen drama was over on The Bachelor, think again. Monday night's episode jumped right back into it, and the show's beloved host may have decided to become a part of it. Chris Harrison mixed up Caelynn and Hannah B. on The Bachelor, and not only was a it moment of comedic gold, but it might have actually been Chris' way of showing that he's in on the feud himself.

It all started at the very beginning of the episode, when Chris came in to share the good news that everyone was heading to Singapore on the first international leg of the season. But first, he was asking everyone how they were doing, and when he asked Hannah how she was hanging in, he called her Caelynn.

Obviously, Hannah was visibly disgusted — as she is anytime Caelynn comes up in conversation — but it was just a small moment among the 15 remaining contestants. For Bachelor fans, though? Well, judging by Twitter, it's probably safe to say that it ended up being one of the highlights of the episode. No matter whose side you are in this feud, it was a pretty funny slip up.

But of course, that leads us to one of the most important questions of the night: was it a slip up? There's a chance that it was a total accident, because it's still early in the season, and it's not likely that Chris has had all that much time to get to know the women. At this point, it can be hard for even the most dedicated Bach fans to be able to name all of the remaining contestants. And if there'd been a lot of talk about Caelynn and Hannah beind the scenes, there's a very good chance that Chris knew Hannah was one of the women involved in the feud but messed up her name.

Then again, there's always that chance that Chris did do it on purpose. After all, he's always taken a bit of a snarky attitude toward his Bachelor franchise hosting duties, and while he certainly takes the leads' journeys to love seriously, he also has a good sense of humor about the whole thing. And if Chris did do it intentionally to drum up some drama or make fans at home laugh, he seems to have succeeded at both.

Chris wasn't the only one adding fuel to the fire, though. Hannah also mentioned that she was done talking about things that involved a certain person, and there were plenty of Looks exchanged. It's clear that this hasn't yet come to a head, and when it does, Chris will have to do a lot more than mix up a couple of names to lighten the mood.

The drama between Caelynn and Hannah probably isn't going to die down anytime soon, so it's probably safe to buckle in. The fiercer the competition gets, the worse it'll be — but at least it'll probably make for super entertaining television.