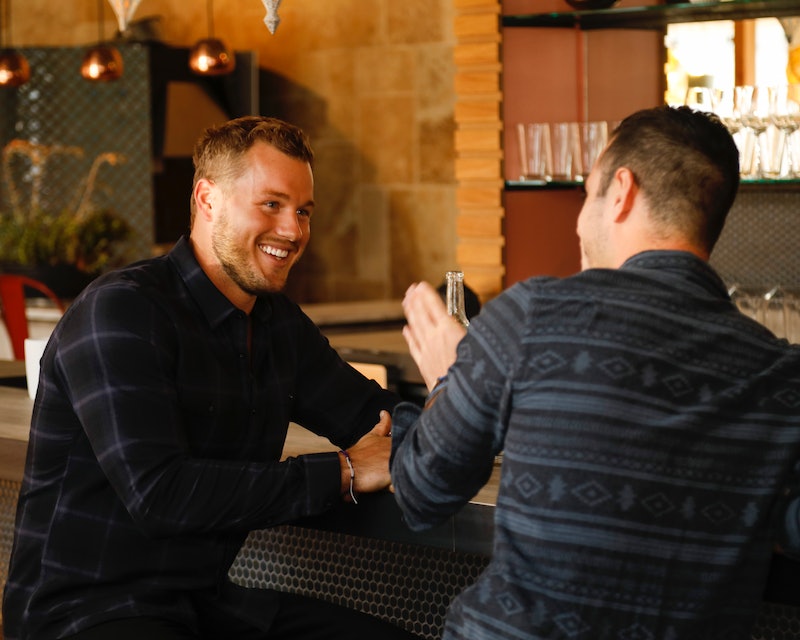 What might be the most dramatic moment of Colton's Bachelor season is yet to come, and it sounds like a pretty high-stakes situation. Chris Harrison talked about Colton's fence jump in a new interview with Entertainment Tonight, and it sounds like the former football player was pretty determined to get away from the show for a little while.

"It was like a gazelle being chased by a cheetah. And in this case, I would have been the cheetah chasing Colton, and he leapt that fence and was gone," Harrison told ET. He added that the already infamous scene is still "a few episodes" away, though, so fans shouldn't get too excited just yet.

And as for how the Bachelor host followed Colton after the incident, well, he didn't have to scale the fence himself. Harrison explained to ET that the gate actually had a button that opened the fence for him (and, presumably, the cameras), no climbing required.

"Colton, he was done," Harrison told the outlet on what prompted the fence-jumping. "He was done with this moment and ready to get away, and he took this fence."

The moment has been shown on several Bachelor trailers, and it does look pretty dramatic. Colton climbs over the fence in one fell swoop, as Chris Harrison calls out his name in the background.

Harrison also shared during the interview that Colton isn't the first Bachelor Nation member to try to quit the show, at least for a moment. "There's varying degrees of it, there's varying degrees of getting fed up in how you express your anger, in how you express your emotions," Harrison told ET. "Rachel [Lindsay] is someone who comes to mind, who was unbelievably headstrong. Being a lawyer, I think she was just more authoritative and more articulate about it."

The host didn't share exactly what Rachel did that was so apparently "headstrong." But it sounds like Colton isn't the only one who's attempted to get away from the cameras for a bit.

While fans haven't seen the moment play out on screen yet, Colton has already showed his willingness to take a second to himself during tense situations. When Nicole and Onyeka were fighting, Colton briefly left the cocktail party for a solo walk on the beach.

Wanting a bit of alone time during a stressful situation is more than understandable. But in reality TV situations like The Bachelor, where the cameras are rolling near-constantly, that's not always possible. The fence-jumping moment shows the pressure Colton was under at the time. And it looks like the series' filming wasn't always fun, to say the least.

If Colton did find love at the end of The Bachelor, though, those frustrating moments will have just been stepping stones on his path to a lifelong relationship. He's stated multiple times on the show that he wants to find his future wife and to get engaged. And if The Bachelor led him to his person, that might be worth a fence jump and frustrated walk on the beach.