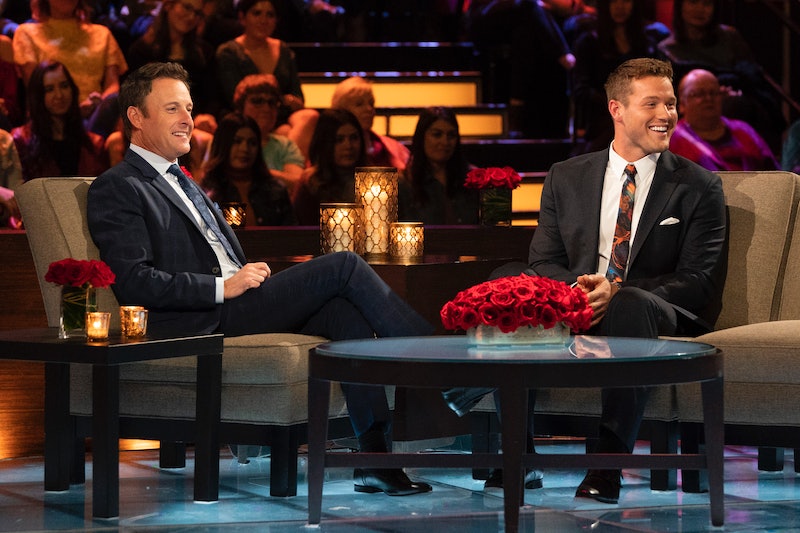 The moment all of Bachelor Nation has been waiting for finally aired on Monday, March 4: the fence jump. Up until now, it had only be teased in promos, marketed as the most dramatic moment ever to grace The Bachelor. Well, Colton finally jumped the fence, and it was just as climactic and intense as fans wanted it to be. It also happened int he last few minutes of the episode, which means fans have to wait an entire week to see what happened next. Lucky for us, Chris Harrison teased the aftermath of The Bachelor fence-jump and revealed just how emotional it all was for the cast and the crew.

While speaking with Entertainment Tonight at the "Women Tell All" taping at the end of February, Harrison talked about the moment, revealing it was just as real and "raw" in person to film as it is to watch back. "It's not pretty on my part, it's not pretty on the producers' part or Colton's, and I think you're gonna see it, warts and all," he said. "It's really emotional on all of our parts." So emotional, in fact, it sounds like a few things happened post-fence jump that are not safe to air. "A lot of tears were shed and a lot of things were said that may not be suitable for ABC, but we all kind of aired our grievances and let it all out," Harrison continued.

According to the longtime Bachelor host, he was pretty shocked at Colton's behavior when he ran off without a trace after Cassie went home, especially considering the fact that they were in a foreign country at the time. "I told him, 'What are you, Liam Neeson? You're gonna go to the Embassy?' He said, 'Well, I grabbed my wallet.' I'm like, 'You don't have a phone, you don't have a passport, where are you going?' But he was just done, and I think that was the whole point," Harrison added. "He finally thought he figured this whole thing out and figured out that he loves Cassie and this is it, and then Cassie realized his greatest fear and crushed him."

Needless to say, it was a first for Harrison, who had never had to run after a contestant before. "He just kind of broke and snapped and he was done... I don't think I realized the severity of it until I was trying to walk after him," Harrison said. "I usually don't have to chase after anybody... but that's kind of the severity of where we were that night," Harrison said. "We were in the middle of nowhere — farm houses, country roads. We didn't know where Colton was, and I thought I heard some dogs down the street, and so I just took off. I didn't even really think about it."

Unfortunately, with the chase happening at the end of the episode, fans won't get to see the aftermath Harrison is talking about until next Monday and Tuesday. But the host did reveal that a roller coaster of emotions would be on full display when the finale airs. "Yeah, I was emotional," Harrison said. "I won't say if I cried or not, you'll have to see. The night was emotional."

Bachelor Nation will get a little bit of a treat on March 5 with the "Women Tell All" episode, a week before the conclusion to the fence jump is finally revealed. What will Colton say to Harrison when the host finally catches up with him? And, most importantly, how will he explain everything to Hannah G. and Tayshia? He can't run away from all those conversations for long.