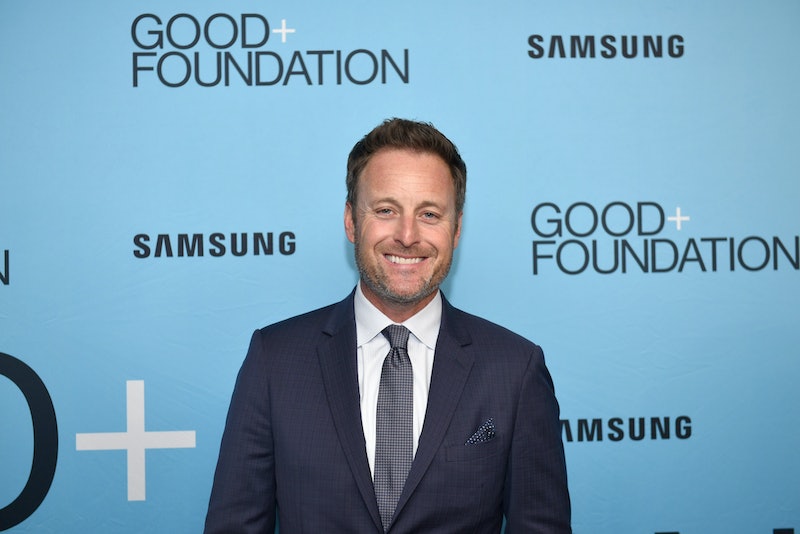 Being a regular Bachelor Nation viewer probably means you're used to the same types of people getting picked to be leads, or even being cast as contestants on the franchise. It's partly why a lot of fans were very excited to see Demi Burnett come out as queer on Bachelor in Paradise this season. But don't get your hopes up for an actual queer lead on The Bachelor or The Bachelorette because Chris Harrison's remarks on future LGBTQ+ Bachelor leads are pretty vague, making them more than a little bit frustrating.

In an interview with The Hollywood Reporter published on Aug. 12, Harrison was asked about the progressive, with-the-times shift the franchise has taken with some of its stars, and if that would lead to more LGBTQ+ contestants, specifically as a lead. The veteran host started off by pointing out that The Bachelor franchise is a representation of whatever social issues or debates are going on at that current time. So it was only a matter of time that LGBTQ+ contestants started coming on the show. "I always say The Bachelor doesn’t create and drive social issues. We’re a microcosm of what’s happening in the world," Harrison said. "We’re all evolving and getting more intelligent, and our eyes are opening in a lot of ways."

That sounded promising, but not so fast. Harrison took a step back "I’m not going to say we’re changing the world — it’s an entertainment show, so let’s stay in our lane a little bit," he said. "But I am proud of the fact that we aren’t afraid of these social issues and are pushing these issues a little bit, and hopefully we do our part in raising the level of debate. And like society, our show will continue to evolve as well." His response is pretty vague, which is really to be expected. Harrison has always commented on even the most juicy or sensitive Bachelor Nation scandals with a politician-like tact — it's his job.

And, while his statements seem supportive of the idea of an eventual LGBTQ lead on the Bachelor franchise, they also didn't promise anything. And considering the show has been overwhelmingly white (The Bachelorette has only had one Black lead with Rachel Lindsay and The Bachelor has never had a Black lead) and heterosexual, it seems like the show hasn't actually gone with the times, contrary to what Harrison insisted.

On the note of having a Black lead on The Bachelor for the first time, with Mike Johnson a clear favorite to be the next Bachelor, Harrison also evaded the question. Of course, Mike is currently on Bachelor in Paradise, so Harrison mentioned that his presence could get in the way of a potential Bachelor run, but also said decisions on leads are out of his control. Though, he did add that it all comes down to who will make for the best TV.

"Every writer or person who is clamoring for something, whatever their social issue is, they’re going to move on and go yell at somebody else," he said. "You have to listen, but you have to do so and be prudent about it as well. We can’t just make decisions because we want to make everybody happy by making a social statement."

So, in other words, don't expect The Bachelor or Bachelorette to feature any LGBTQ+ leads — at least, not any time soon.