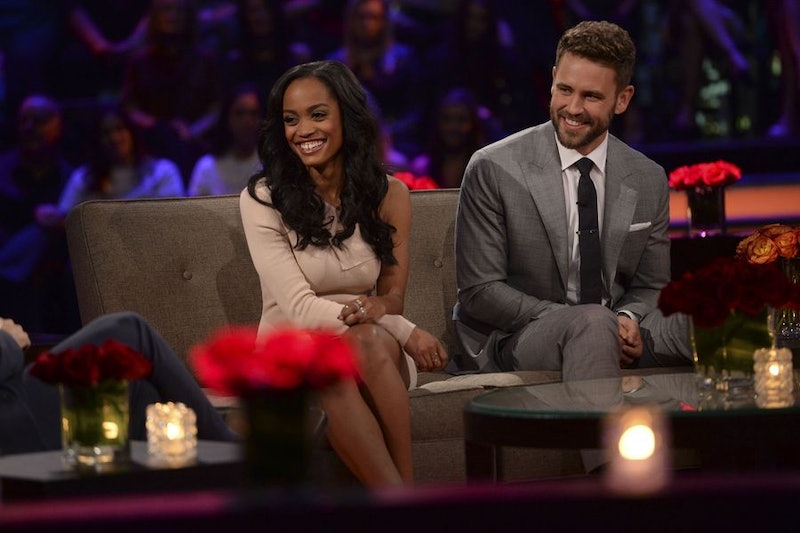 The Bachelor always teases us with the prospect of "historical," never before seen moments every season, but this year, we actually got a real one. For the first time in the show's history, the Bachelorette, Rachel Lindsay, is black — and the announcement came several episodes before Nick Viall sent her home. And on Monday night's Women Tell All special, Rachel made her first official appearance as our next Bachelorette and opened up about the season to come. How Rachel feels about being the first black Bachelorette is pretty understandable, and hopefully, it does lead her to love.

In fact, while Rachel did say she was "honored" to take on this particular first, she did seem like she doesn't want the fact that she's breaking the Bachelorette mode to be all that people are paying attention to when it comes time for us to watch her search for the man she's going to spend the rest of her life with. And it's good to hear how she feels, because she made a lot of sense.

"I don't want it to be the focus of my journey," Rachel told Chris Harrison. "I'm happy to be the person to do this and I'm humbled by the experience."

After being a longtime fan of The Bachelorette (and the rest of this crazy franchise), I know I'm not alone in saying that having a woman of color in the driver's seat is long overdue. But I hope that people treat the season the way that Rachel wants them to, because this is going to be a big deal — not just because it's historic, but because this could change the rest of her life in so many ways.

Now that there's only one episode left of The Bachelor, I'm already counting down the days until The Bachelorette premieres in May. I can't wait to see Rachel in action!