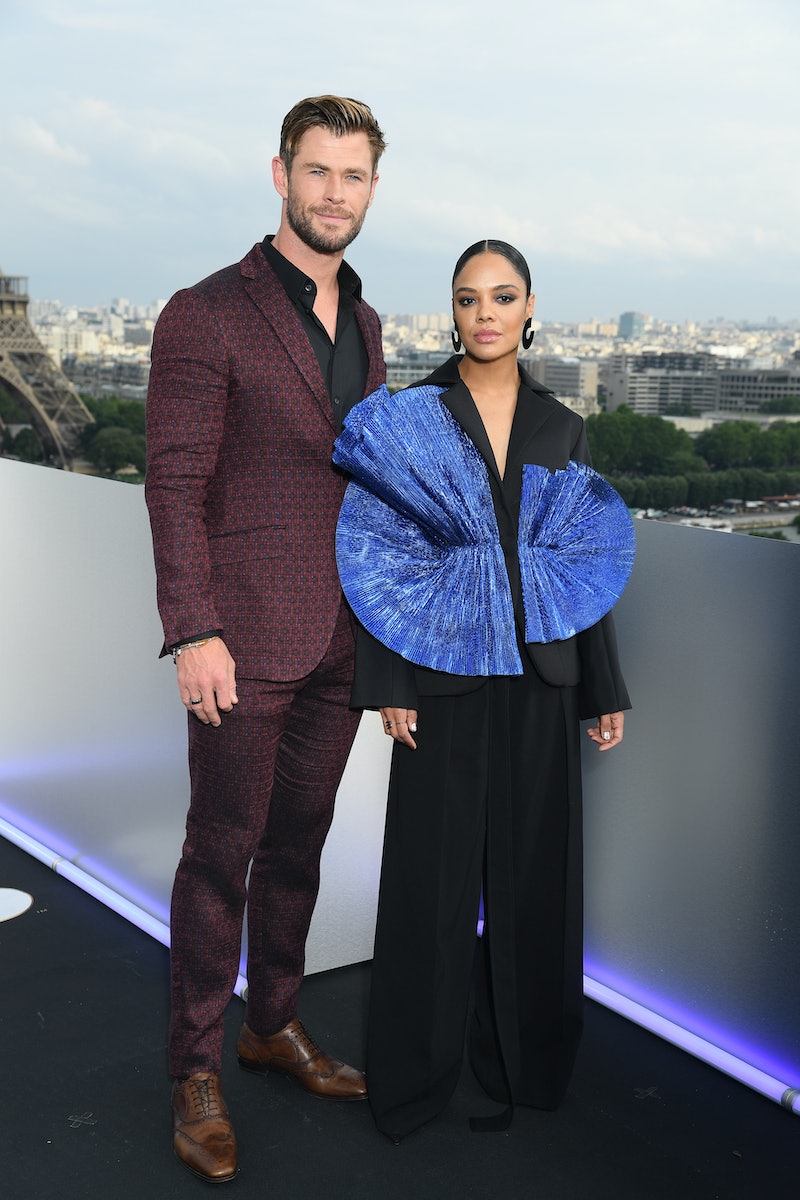 If you hear "perfect Hollywood partners" and automatically think of Chris Hemsworth and Tessa Thompson, you're definitely not alone. The two have starred in three films together thus far, starting with Thor: Ragnarock, making them an official Hollywood blockbuster pair. And fans are already scrambling to know what their next project together will be. So much so that Chris Hemsworth and Tessa Thompson recently addressed The Bodyguard remake rumors that have people so excited.

While doing press for their newest collaboration, Men In Black: International, the rumors came to a head when Entertainment Tonight sought to get the real scoop. It turns out, this Hollywood rumor might actually hold some water, as Thompson admitted it was actually all her idea. "I started this rumor," she said. "Because when we were making Thor [Ragnarok], he comes into work on Monday, and I'm like, 'How was your weekend?' and he's like, 'Good.' He's like, 'Ah, The Bodyguard is such a good movie.'" (Is he wrong? Absolutely not.)

She continued: "And I'm like, 'I'm sorry, what?' That's what he had been doing on Sunday, watching The Bodyguard." Hemsworth quickly exclaimed that the classic was "brilliant."

Not only did Thompson start the rumor, she even has an idea on how to put a twist on the narrative, a classic role reversal. She would play the titular bodyguard, played by Kevin Costner in the original, and Hemsworth would play the award-winning singer, previously played by Whitney Houston. "And you carry me off-stage at some point," Hemsworth added.

In case you slept your Whitney Houston start-up course, The Bodyguard is a 1992 movie about, yes, a bodyguard who is hired to add extra protection to Houston's character when she learns she has a stalker on her hands. Of course, they fall in love. 30 years later, it's still regarded as an iconic romance movie, and it also gave the world the songs "I Have Nothing," "Run to You," and everyone's favorite, Houston's cover of "I Will Always Love You."

If the idea of Hemsworth and Thompson remaking The Bodyguard sounds too good to be true, it might be, as Hemsworth said the film was "almost too special to remake."

It seems like the rumor around this started in May when the two did an interview with Total Film, as reported by Metro, and Thompson mentioned Hemsworth's love of The Bodyguard. In the same interview, she hinted that they were actually thinking of doing it. "We’ll do a modern retelling... We’re still brainstorming that one. But there’s interest. Real, robust interest out there," she stressed at the time. Whether this new ET interview is a way to get people off the scent of the film, or if it's just a joke between friends, will only be revealed in time.

Even if they don't do a Bodyguard remake, it's likely that fans will get to see Hemsworth and Thompson on the big screen together again after Men In Black: International. Speaking to ET, Hemsworth praised Thompson, saying, "She's the kindest human being, with the biggest heart, and the most beautiful actress on the screen." He added, "Hopefully, she'll have me around again." Hollywood is only gaining things by having these two together, so hopefully it continues to happen for a while longer.