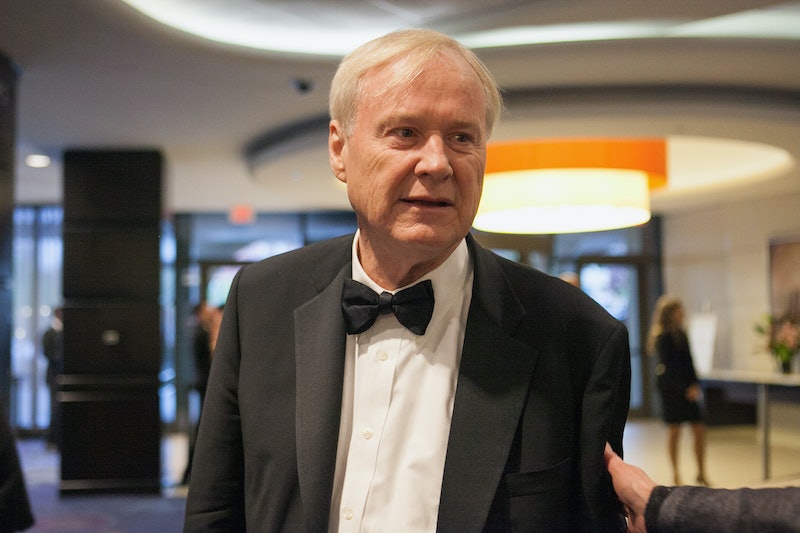 On Monday, former acting attorney general Sally Yates appeared before the Senate Judiciary Committee, which is currently investigating Russian interference in the 2016 presidential election. Yates testified that she had informed the White House that then-national security adviser Michael Flynn was compromised and vulnerable to blackmail by the Russian government, a warning the administration seemingly ignored until his dismissal 18 days later. It was a powerful and dramatic scene, although one cable news anchor seemed to have his mind elsewhere — MSNBC's Chris Matthews' sexist Sally Yates comment may have come and went pretty quickly, but it was sadly not surprising.

The moment came during his Monday evening episode of Hardball. It wasn't exactly an attention-grabbing or jaw-dropping moment, but rather a sort of casual aside which, in fairness, could be easy to overlook. However, it was the kind of remark it would be pretty hard to imagine Matthews, or any cable news host for that matter, making about a man who had just testified before a Senate committee on matters of election interference, Constitutionality . of executive orders, and the responsibilities of different government officials. Matthews made it very clear that he likes the way Yates looks and sounds, and doesn't mind letting the world know it.

I have to say that just watching her today, I wouldn't want to be against her. Unflappable, attractive, obviously, very well spoken, that nice southern accent, standing up there right in the face of Ted Cruz, when Cruz was being, I thought pretty nasty. Right to him, right back with the facts as a great debater, and he always looks like he's got you. And he didn't get her.

This is not, it must be said, the first time the 71-year-old host has made an awkward on-air remark about a woman in politics, or even a professional colleague.

During former Democratic presidential nominee Hillary Clinton's career in the Senate, he infamously accused her of sounding "witchy." He also gave her a decidedly backhanded compliment, saying that it was hard for a woman to give a "barn-burning" speech, because men often hear it as "fingernails on a chalkboard."

Back in 2007, he urged CNBC's Erin Burnett to lean into the camera during an on-air segment, then laughed when she complied and told her she was "a knockout."

In 2013, he asked veteran reporter Andrea Mitchell, with apparent incredulity in his voice, whether women really still worried about domestic violence nowadays:

Is that close to the bone? The idea of wife-beating, or some old ph- or beaters? ... Is that really something women worry about, men being brutal? In the home? In the home?

While Mitchell gave him a straight answer, she sounded a wee bit taken aback by the question, which is understandable. As Matthews could've learned from a quick bit of research, a staggering one in three women experience physical violence at the hands of a partner in their lifetimes, according to a 2010 CDC report.

Matthews has a track record of inappropriate remarks about women, of which his latest about Yates was actually a relatively mild example. However, it's a worthwhile reminder that there are still plenty of men who feel more than comfortable commenting on the looks of women, perhaps mistaking testifying before the Senate for a beauty pageant.

More like this
Matt Hancock Broke a Major Rule With I’m A Celeb
By El Hunt
Iran Has Issued A Death Sentence Over Mahsa Amini Protests
By Catharina Cheung, Darshita Goyal and Maxine Harrison
6 Of Mike Tindall’s Unfiltered & Royally Entertaining Jungle Confessions
By El Hunt
Meet Jungle Runner-Up Owen Warner's Equally Handsome Brothers
By Sam Ramsden
Get Even More From Bustle — Sign Up For The Newsletter