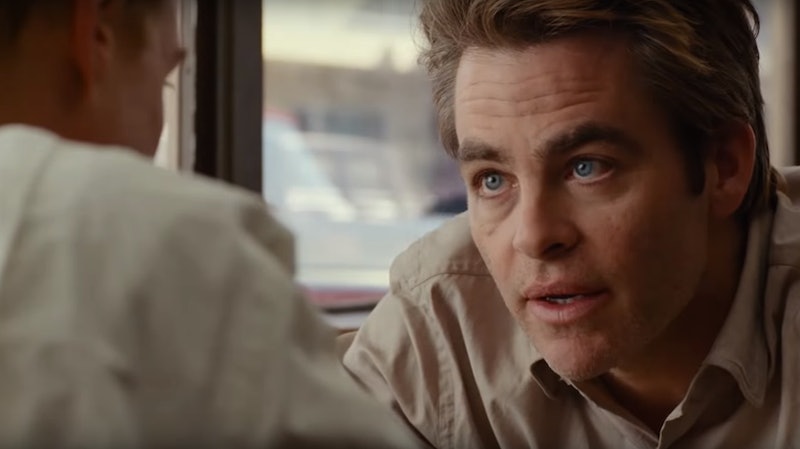 They've been traveling through the decades together on-screen, and Chris Pine and Patty Jenkins' collaboration I Am the Night is a period piece fans won't want to miss. On Monday, July 2, TNT released the trailer for its upcoming miniseries, a thrilling look into an eerie era of Hollywood history. Inspired by true events, the six-episode series I Am the Night is helmed by Jenkins, who serves as executive producer and director, and it stars Wonder Woman's Chris Pine (who also serves as co-EP). Although Gal Gadot will be missed from this epic Wonder Woman team, I Am the Night is promising to be a show people will be talking about, as it uncovers truths about some of Hollywood's darkest moments.

According to Collider, Jenkins and Pine reunited for this project between Wonder Woman and the upcoming, highly-anticipated Wonder Woman 1984. The action-packed, mysterious trailer leaves viewers with so many questions, which is already a good sign. The story takes place in the '50s, when Fauna Hodel (India Eisley) starts the hunt to learn about her roots since she was given away at birth. Fauna Hodel was the granddaughter of Dr. George Hodel, infamous Hollywood gynecologist and suspect in the notorious 1947 Black Dahlia murder.

In the series, Fauna begins to unravel her dark ancestry, tied to Dr. Hodel, as former Marine-turned-hack-reporter/paparazzo Jay Singletary (Pine) investigates the situation and how it's tied to the Black Dahlia murder. What makes this so fascinating is that the late Fauna Hodel wrote the book One Day She'll Darken, published in 2008, about her journey and sinister family history. (This was originally the name of the series when it was first announced in 2017.)

The alleged dark issues within the Hodel family have been well-documented, and this riveting series is likely to explore them in an even deeper level. According to an article by the University of North Carolina's Morgan Korzik, Dr. Hodel was acquitted in an incest trial after being accused of having sex with his daughter Tamar in 1949. Fauna Hodel's book explains that after the case, 16-year-old Tamar reportedly gave birth to a girl she claimed had a black father. That baby was Fauna.

Because of the racial stigmas of the time, Tamar's mother permanently gave Fauna away to a black maid, Jimmie Lee, in Nevada. The book chronicles how Jimmie and Fauna struggled, from poverty to abuse and "relentless bigotry," further describing the onset of Fauna's journey to find her biological mother. Thus is the twisty, historical premise of I Am the Night, which depicts Fauna's journey of being rocked by her own family's past.

Needless to say, fans are already sold and have been taking their excitement to Twitter.

In addition to the gripping, real-life story the show is based on, it's no wonder fans are pumped. It'll be the return of Jenkins and Pine working together. It's no secret the two have loved working with each other, and since Pine's character was sadly killed in Wonder Woman (or so fans think), taking on the small screen together is one way to keep this dream team going. Last year, Jenkins sang Pine's praises on Twitter, writing, "Chris’ skill, talent and generosity blew me away, every day. Making that kind of performance look easy is epic badass. He’s a beast."

However, Jenkins revealed that Pine would return for the Wonder Woman sequel on Twitter in mid-June. The World War II-set Wonder Woman had viewers speculating that Steve had been killed, but photos from Wonder Woman 1984 have telling evidence otherwise. It seems these two are on a mission to continue telling epic stories across various decades, and who would ever stop them from taking on such a thrilling challenge?

More like this
Glenda Cleveland Died 2 Decades After Trying To Turn In Neighbor Jeffery Dahmer
By Brad Witter
What Reporting On The UK’s Most Prolific Cyber Stalker Taught Me
By Sirin Kale
Alleged Cult Leader Larry Ray Is Awaiting Sentencing Following His Conviction
By Brad Witter
Where Is The Bling Ring’s Rachel Lee Now?
By Arya Roshanian
Get Even More From Bustle — Sign Up For The Newsletter