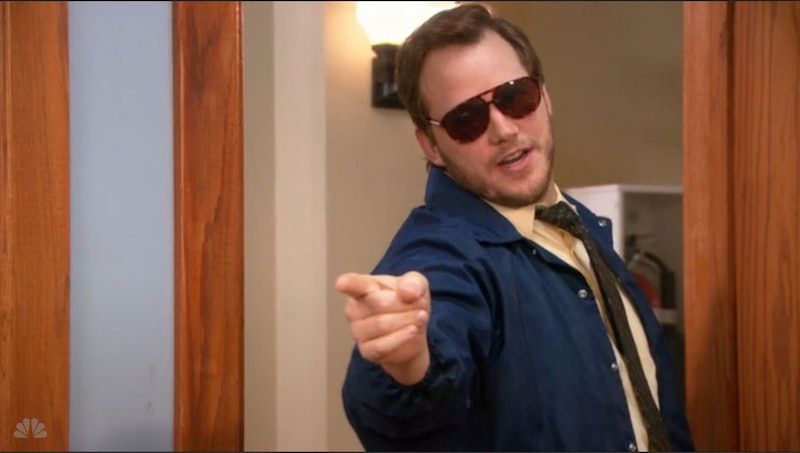 Burt Macklin, FBI! On Tuesday, President Trump fired FBI Director James Comey. It stirred many reactions across the internet, but one of the best comes from this former Parks and Recreation star. Early Wednesday, Chris Pratt responded to Comey's firing in the most perfect way. He tweeted a gif of Andy Dwyer as his alter-ego, FBI Agent Burt Macklin. Next to the image, the Guardians of the Galaxy Vol. 2 lead wrote, "Just lemme know."

Does it get better than that? If you've never watched Parks and Rec, then you don't get Pratt's reference. However, for those, including myself, who loved the former NBC comedy, his reaction is everything and so much more.

Also, it's exactly how Andy Dwyer would've responded. Andy so badly wanted to be a police officer (sadly, that did not work out as he had hoped), so after learning that the FBI Director position needed filling, you know he would've tried his hardest as Burt Macklin to snag the role. Trump firing Comey also would've made a great Parks and Rec storyline. Can't you see it all playing out in an episode?

Granted, Burt Macklin probably wouldn't succeed as the head of the Federal Bureau of Investigation, because, well, he was a bit reckless. But, hey, Pratt and Dwyer can dream.

Furthermore, it's what pretty much every Parks and Rec fans want to happen. To us, Macklin is the man for the job.

Just Do It Already

He's always on the case.

Macklin, you son of a b*tch.

He's the only one that makes sense.

Just look at his skills.

The Best Fixer In The Biz

His qualifications are all there.

It Must Become A Reality

Macklin, where are you?

He takes investigating to the next level.