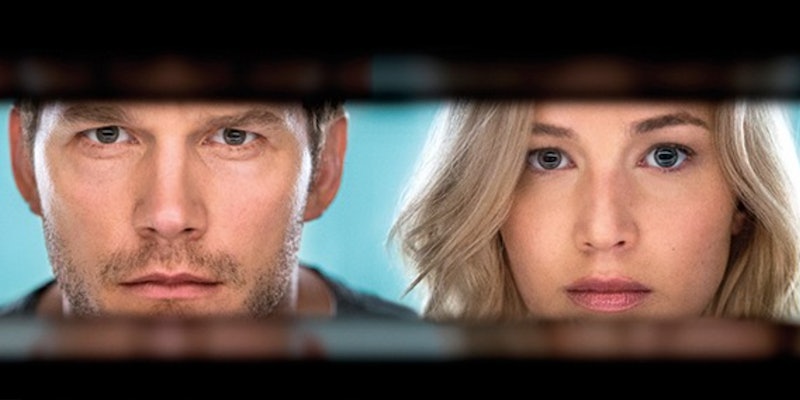 There's a lot to talk about when it comes to the new star-studded sci-fi film, Passengers. The premise, about two people (played by Chris Pratt and Jennifer Lawrence) on a spaceship waking up 90 years too early in their journey to a new planet, will definitely make you think about concepts of loneliness and companionship. And the visual effects of the film, including some incredible shots of space and the effects of gravity, make it a lovely movie to look at. But there's one visual that really takes the proverbial cake, and by that I mean, you totally get to see Chris Pratt's butt in Passengers. Twice.

Yes, as one more small step in Hollywood's never-ending slog toward nudity equality, the leading man in Passengers reveals his naked butt at two different points in the movie. Just when you think the film has done its duty by giving you one butt scene, as Pratt's character takes a shower, it goes above and beyond, bringing that bottom back as Pratt takes advantage of the highly unpopulated ship by walking its halls in the nude.

Fortunately for all fans of Pratt, and of butts in general, the actor has been super chatty about the experience of filming a nude scene. When Pratt went on The Late Late Show With James Corden, Entertainment Tonight reported, he dashed the hopes of those wanting to see a little more than just cheek, saying "You don't see my Jon Stewart," and explaining how, when it comes to nudity clauses "You really stipulate what they are and are not allowed to show." He also joked with Entertainment Tonight that "It's a really deep mental preparation needed to show your butt on camera," and admitted that he didn't do a single squat to prep, though he did do a little tanning maintenance.

And this isn't Pratt's first time getting naked onscreen either. Long before he sculpted his body into the traditionally muscular "leading man" physique and became one of Hollywood's top Chrises (I voted for the underrated Hemsworth but I suppose that's neither here nor there), Pratt bared it all in an episode of Parks & Recreation. In 2015, US Weekly reported on an interview Pratt did on the Graham Norton show, where he recalled a scene in which his character Andy Dwyer shows up at the doorstep of his ex-girlfriend Ann stark naked. He told Norton, "I was wearing skin-colored underwear and I wasn't getting quite the right reaction I was hoping for. It was late in the day so I decided to improvise and drop my trousers for the take." Amy Poehler, playing her character Leslie, opened the door and gave what Pratt called a "great" reaction to unexpectedly seeing his naked body.

While I view this story more as an example of a sort of an unsolicited experience, and Pratt admits that NBC execs were apparently pretty unhappy, the actor was delighted by the story, proving he's clearly very comfortable with getting naked as part of his job.

I think I speak for a lot of people when I say that I hope Pratt's casual approach to nudity means his butt will be showing up in each and every one of his future films. For now, though, at least we have Passengers.