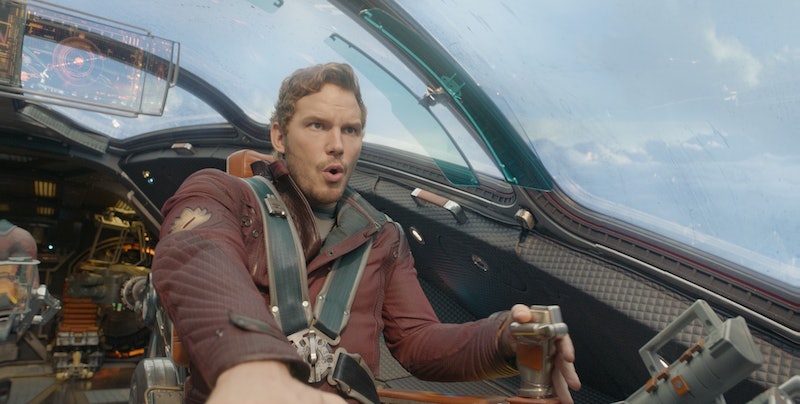 Who knew he was such a rebel? Despite the fact that the cast and crew of the latest Marvel Cinematic Universe installment was apparently warned against filming anything on their phones, Chris Pratt recorded a BTS video on the Avengers: Endgame set anyway. Fans of the Marvel franchise should be super grateful that he took that risk, though, because the short clip is a star-studded — albeit, "illegal," as Pratt calls it in the video — glimpse behind the scenes of one of the year's most highly-anticipated films.

On Monday, April 29, Pratt — who plays Peter Quill (a.k.a. Star-Lord) in the Guardians of the Galaxy series — posted some footage via Instagram that he just couldn't resist sharing. "I remember being blown away in this moment on the @avengers set," he wrote in the caption. "Nobody was allowed to film anything on their phones. I said screw it. No rule was going to stop me from seizing this once in a lifetime opportunity to capture this collection of stars, a group that likely will never be in the same room again. We are so blessed."

Now, if you're a fan of the franchise, you'll probably recognize the setting and scene in Pratt's recording. Spoilers for Endgame. It appears to be taken on the set where they filmed the final battle against Thanos, which united almost every single superhero character the MCU has ever featured onscreen.

It's pretty cool to see all the stars in their places, getting various directions and notes about the scene. And it's also kind of funny to see some of them with their make-up half-way done, but wearing totally casual, comfy clothes from the neck down. Also, can we talk about how intensely focused Renner looks, crouching atop that boulder? So intense. So focused.

Pratt posted another photo from the Endgame set to Instagram on Monday, this one in celebration of the film's success. The pic was of him, looking all bruised and battered, alongside Karen Gillan (who plays Nebula). "Just really can’t believe how well @Avengers is doing," Pratt captioned the shot. "And how good it is. I’m floored by all of it. I did the math... at about $12 per ticket, and a $1.2Billion opening that’s ONE HUNDRED MILLION PEOPLE who watched the movie in one weekend. I think."

Pratt's estimation is likely a little off — after all, there are probably more than a few people who saw the film more than once this past weekend — but that doesn't make those numbers any less impressive. Endgame pretty much shattered all of the box office records with its recent debut, and shows no signs of slowing, according to BuzzFeed.

So, will Bad Boy Pratt continue to share more behind-the-scenes footage in celebration of the film's success? One can only hope. This will definitely do for now, though.