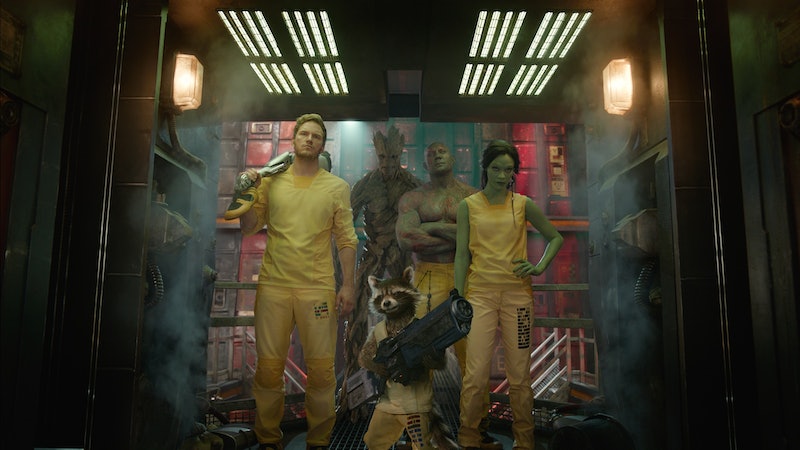 So, you've seen Avengers: Endgame, and you've got some questions. well, you've come to the right place. It makes sense that you might need help clarifying a few things, since a lot went down in those three hours, and — major spoilers for Avengers: Endgame ahead — one thing that wasn't totally clear: where Gamora is after Endgame, and why did she go?

To backtrack just a little, it's important to note that the Gamora fans saw die in Infinity War — the one who went through a pretty big character development over the first two Guardians of The Galaxy films — is 100% gone. She's still dead, thanks to Thanos throwing her off the cliff on Vormir in order to attain the Soul Stone. The Gamora in Endgame is actually Gamora from 2014, right before she met Star-Lord and turned on her father. And it's this Gamora from the past who ends up disappearing in 2023, after time traveling Thanos in Endgame to help him in his attempt to get the Infinity Stones and then helping defeat him.

She may have turned on her father, thanks in large part to Nebula, but after the dust clears from the battle, and the Guardians are back on their ship with Thor, she's nowhere to be found. Peter Quill, however, is desperate to find her. In fact, he's looking at a screen that shows the computer is currently searching for her whereabouts.

In a world where tons of galaxies are easily accessible, Gamora could be anywhere. It's not the Gamora that you've come to know and love, but that doesn't mean Peter will stop trying to find her. Or Nebula, for that matter.

Gamora's location is definitely unknown. It's not clear, or shown, how she left Earth after the battle, and there doesn't seem to be a motive as to why either. For the past few of years that fans have known Gamora, she's always been living in fear of her father. Even if she wasn't with him or fighting him directly, the threat of Thanos was always out there, as seen in Infinity War. Now that he's gone, and she's her 2014-self, she doesn't have a set purpose and is free from his grasp for the first time since childhood.

Gamora's disappearance, while sad, is also a pretty great set up for Guardians of the Galaxy Vol. 3, because it gives them a purpose: find Gamora. And with Thor and Nebula officially joining the team, it seems like they have a pretty good chance of tracking her down. 2014 Nebula and Gamora might not get along, but they're still sisters. If anybody knows where Gamora might be hiding, it's her newly-good sister.

As for what Gamora will be like when the Guardians find her, that's tricky. The 2018 Gamora is dead and she's not coming back. However, it's important to note that a key comic book character is reportedly coming to GotG 3, and he has some crazy pull with the Soul Stone. One of the post-credit scenes from Guardians of The Galaxy Vol. 2 shows the "birth" of Adam, and Den of Geek reports that this very well might be Adam Warlock. This character, according to Den of Geek, has ties to the Soul Stone, so if the Guardians befriend him, perhaps he might be able to combine the soul of the murdered 2018 Gamora and that of 2014 Gamora. It would be a pretty happy way to bring back what's been lost, but it might be a long shot.

Regardless of where she is, it's obvious that Guardians of The Galaxy Vol. 3 is going to have to deal directly with the repercussions of Endgame. And that means finding Gamora, ASAP.