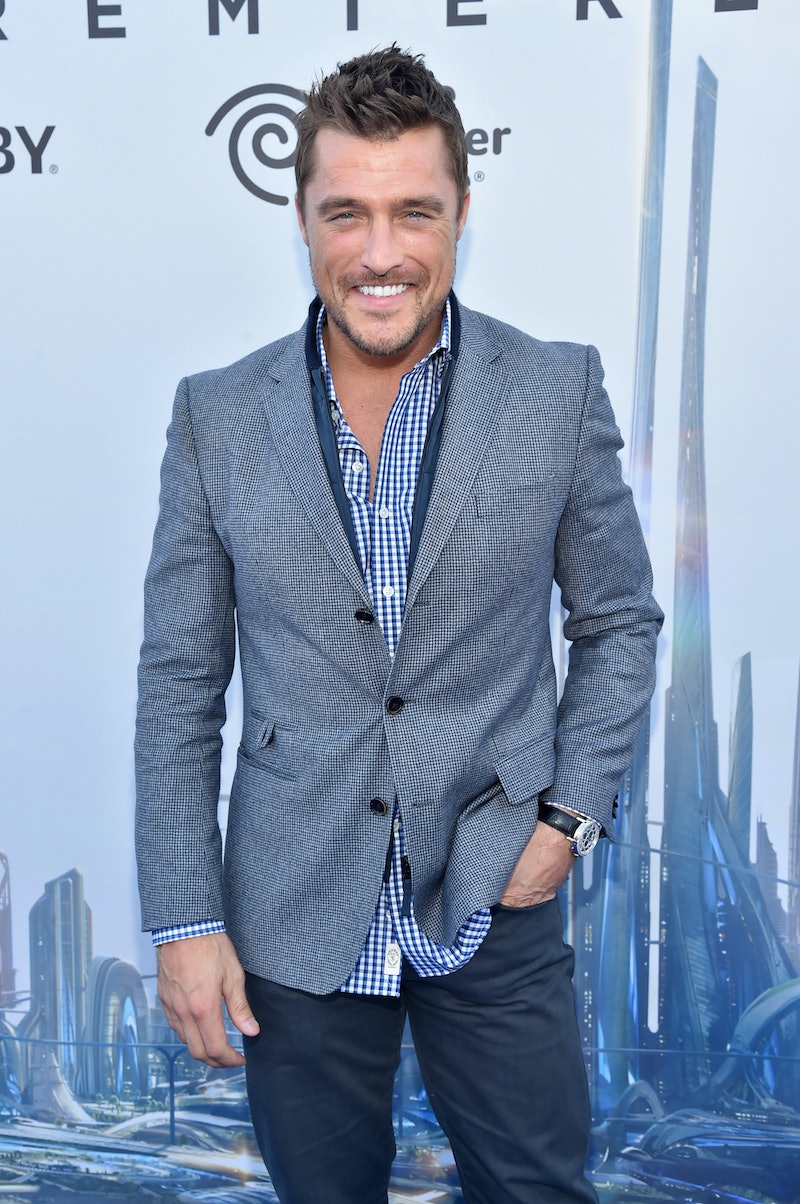 On Tuesday, Chris Soules was arrested and charged for allegedly fleeing a fatal car accident on Monday, April 24 near Aurora, Iowa, as confirmed to Bustle by the Buchanan County Sheriff's Office. (Bustle has reached out to Soules' rep for comment, but did not receive a response at the time of publication.) Now, Chris Soules has been released from jail, authorities told The Des Moines Register. Based on court documents obtained by the publication, the former Bachelor star's mother, Linda, posted his $10,000 bond at 11:37 a.m. A jail employee also told the outlet that Soules left police custody around noon Tuesday.

UPDATE: Audio released by the Buchanan County Sheriff's department shows that Chris Soules called 911 in regards to the accident.

UPDATE #2: A rep for Soules released the following statement to Bustle on May 3: "Neither Mr. Soules nor his legal counsel will be responding to the numerous tabloid style articles and journalists who have been reporting false and misleading stories by citing 'unnamed sources.' Rather, they will be focusing on presenting the truth, which will reveal how inaccurate and unfair so many of these news accounts have been. We are confident that the fair-minded citizens of Iowa will do what they’ve always done – reserve judgment until all of the accurate information is properly presented."

EARLIER: The 35-year-old's lawyers, Sean Spellman and Molly Spellman, released the following statement Tuesday regarding the accident to Just Jared:

Chris Soules was involved in an accident Monday evening (April 24) in a rural part of Iowa near his home. He was devastated to learn that Kenneth Mosher, the other person in the accident, passed away. His thoughts and prayers and with Mr. Mosher’s family.

Now that Soules is out of custody, The Des Moines Register reports that his preliminary hearing is set for 1:30 p.m. on May 2. Per court documents, Soules is under supervision and is not allowed to leave the state without written consent from the court. He is also required to wear an electronic ankle bracelet. Prior to his release, the Associated Press reported that Soules would also have to surrender his passport. Entertainment Tonight then reported that Soules has already turned in his passport due to an event he was reportedly planning on attending outside of the country.

On Monday, April 24, 2017 at approximately 8:20 pm, the Buchanan County Sheriff’s Office received a 911 report of a motor vehicle accident with injuries in the 1000 blk of Slater Avenue (W45) north ofAurora. According to the investigation, a 2008 Chevrolet Silverado operated by Christopher Douglas Soules, 35, of Arlington was southbound on Slater Avenue when he struck the rear of a southbound John Deere 2640 tractor operated by Kenneth Eugene Mosher, 66, of Aurora. The collision caused the tractor to go into the east ditch. Soules’ vehicle went into the west ditch. Mosher was transported to Mercy Hospital in Oelwein where he was pronounced dead. Soules was uninjured in the accident and left the scene of the accident prior to law enforcement arrival.

Soules was located shortly after at his residence located in the 7500 blk of B Avenue in near Arlington in Fayette County. He was subsequently arrested and transported to the Buchanan County Jail, where he was charged with Leaving the Scene of a Fatality Motor Vehicle Accident (class D felony). Soules bonded out of the Buchanan County Jail on a $10,000 bond on Tuesday morning, April 25, 2017.

No other information is being released at this time pending the continued investigation into the cause of the accident. Due to the on-going investigation, further charges may be pending. The Buchanan County Sheriff’s Office was assisted in this incident by the Iowa State Patrol, Fayette County Sheriff’s Office, Aurora Fire Department and Oelwein Mercy Ambulance Service.

On Monday, April 24, 2017 at approximately 8:20 pm, the Buchanan County Sheriff’s Office received a 911 report of a motor vehicle accident in the 1000 blk of Slater Avenue north of Aurora involving a pickup truck and a tractor. At this time, one fatality has been confirmed. No other information is being released at this time pending the investigation and notification of family. The Buchanan County Sheriff’s Office is being assisted by the Iowa State Patrol and further information will be released at a later time.