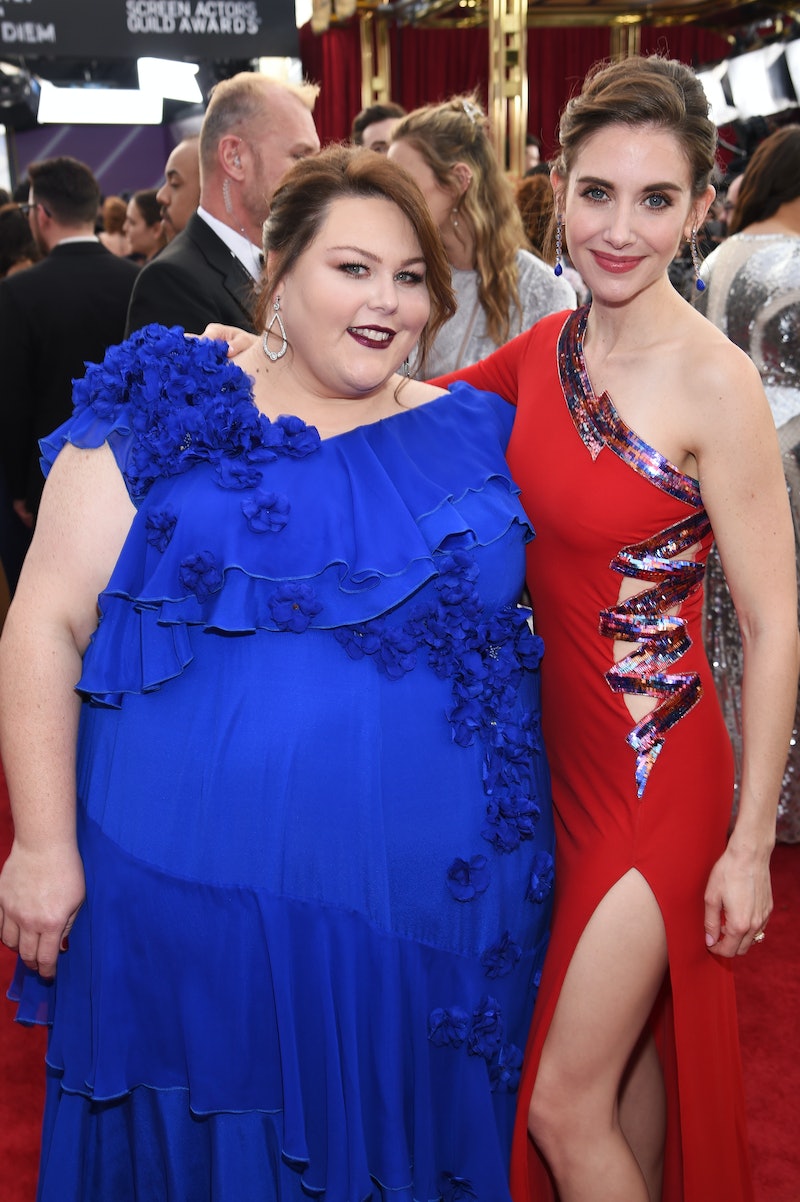 Despite reports to the contrary, these TV stars couldn't be further from feuding. At Sunday's 2019 Golden Globe Awards, a story was going around that Chrissy Metz had made a rude comment about Alison Brie behind the scenes, but it seems that all's good between these two. In fact, Brie shut down rumors that she and Metz don't like each other with a sweet post on her Instagram Story, so if you're fans of both women, don't worry — there doesn't seem to be any bad blood here.

According to People, the feud rumors started when Metz was reportedly recorded saying something that sounded sort of like, "She's such a b*tch." Later, when the magazine asked her about it during the Golden Globes, Metz denied saying anything like that.

"I'm so distraught and upset," the This Is Us star told People. "I don't speak about anyone like that, I don't speak like that. I love Alison. I follow her. When I was walking up, they said, 'Do you know Alison?' and I said 'Oh boy, do I.' I love her."

And now, just to make sure the message is sent loud and clear, Brie has turned to Instagram to share a photo of her and Metz from the Golden Globes, along with a caption that proves there is only love between them. "Nothing but love for @chrissymetz!!" Brie wrote. "Rumors can't keep us down!"

This isn't the only time Brie spoke out about the situation with Metz at the Golden Globes, either. When a reporter from Vanity Fair asked her about it, Brie said, "But why? I know her. I saw her on the carpet and told her how beautiful she looked."

Being that Metz and Brie obviously linked up on the red carpet, it makes way more sense that they'd be friends than the alternative — and in the resulting photo, they definitely seem like they like each other. Metz made her own attempt to clear the air by tweeting her true feelings on the matter on Sunday night, after the supposed drama went down.

"It's terribly unfortunate anyone would think much less run a story that was completely fabricated!" Metz tweeted mid-ceremony. "I adore Alison and would never say a bad word about her, or anyone! I sure hope she knows my heart."

In a statement to People, Metz's rep also quelled the rumors, saying:

"Chrissy never said that. She would never say that about anybody. She’s a huge fan and friend of Alison Brie. Chrissy has nothing but admiration and respect for Alison and, frankly, every fellow actor who must wade through this much-too-common attempt to create a feud among colleagues.”

It's good to hear that Metz and Brie have only love for each other — they're two very talented women who likely have a lot in common and both star in very popular shows. Maybe Metz can make an appearance on GLOW someday? And Brie would definitely be awesome on This Is Us. Make it happen, you two.