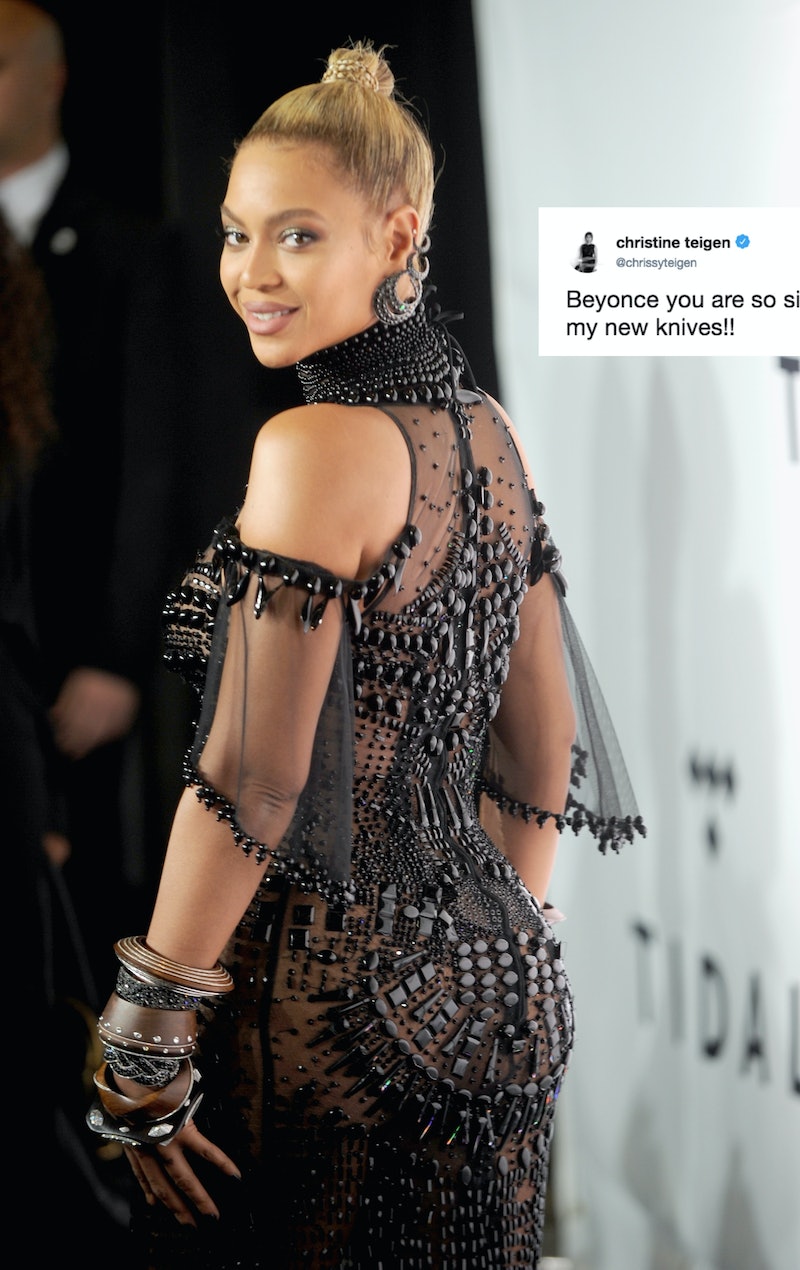 For so many of us, Target isn't just a store, it's a way of life. And when it comes to music, Beyoncé isn't just a singer and performer, she's also a way of life. Put them together and you get something really special — and not even her fellow celebrities are immune to freaking out about it. Chrissy Teigen and Busy Philipps had the best reactions to Beyoncé shopping at Target on Monday, because it's amazing and almost inconceivable all at the same time that she'd be spotted at everyone's favorite store.

It all started when someone shared photos of Bey casually shopping at a Target in Los Angeles, cart and all, in the baby department. Of course, because she is Beyoncé, she's wearing huge, glam sunglasses and a yellow jumpsuit — an outfit that is so quintessentially Queen Bey — on her Target run, but it's definitely her, and it's still striking to see her in that environment.

Of course, it makes sense that she'd be there, because not only is Target awesome, but she also has babies who probably need stuff from that aisle. But seeing a star as huge as Beyoncé out there doing her own shopping like that has been throwing fans for a loop.

Included in those fans are fellow celebrities Chrissy Teigen and Busy Philipps, who both took to Twitter to share their excitement with two very relatable reactions.

Philipps, who apparently is very familiar with the Target location that Beyoncé was shopping at, was very upset that she didn't happen to be there that day. Aren't we all?

"OF ALL THE DAYS I WASN'T AT THAT TARGET!!!!!!!" she wrote, along with several crying emojis. Same, Philipps.

Then, there was Teigen, who took a bit of a different approach. Yes, she was still excited that Beyoncé was at Target (as many of us were), but she has a bit of a personal tie to the store. As her fans already know, Teigen's line of cookware is currently being sold at Target, and her knife set just recently launched. So of course, Teigen had to make a joke about how Beyoncé was clearly there to buy her merch.

"Beyoncé you are so silly, I can just send you my new knives!!" Teigen wrote, although so far there's been no word on whether or not Beyoncé decided to take her up on her offer. She totally should, though, because they look like really nice knives.

This isn't the first time that the Lemonade singer has been spotted at the superstore chain. In December 2017, Beyonce was seen at Target with Blue Ivy and mom Tina Knowles, so it seems like she does love the store — maybe even as much as so many of us do.

Being that going to Target seems to be a normal part of her routine, chances are good that Beyoncé will be spotted there again in the future. Maybe she should collab with the brand? Or better yet, collab with Teigen's Target collection? Miracles do happen sometimes.

More like this
Beyoncé’s Special Tribute To Sister Solange Was Both Touching & Hilarious
By Stephanie Topacio Long
'The Bachelor's Peter Weber & Kelley Flanagan Are Reportedly Back Together
By Grace Wehniainen
Gisele Bündchen Appears To Address Those Tom Brady Divorce Rumors
By Radhika Menon
At 14, Jurnee Smollett Was Taking Meetings With Missy Elliot & Lauryn Hill
By Chloe Foussianes
Get Even More From Bustle — Sign Up For The Newsletter