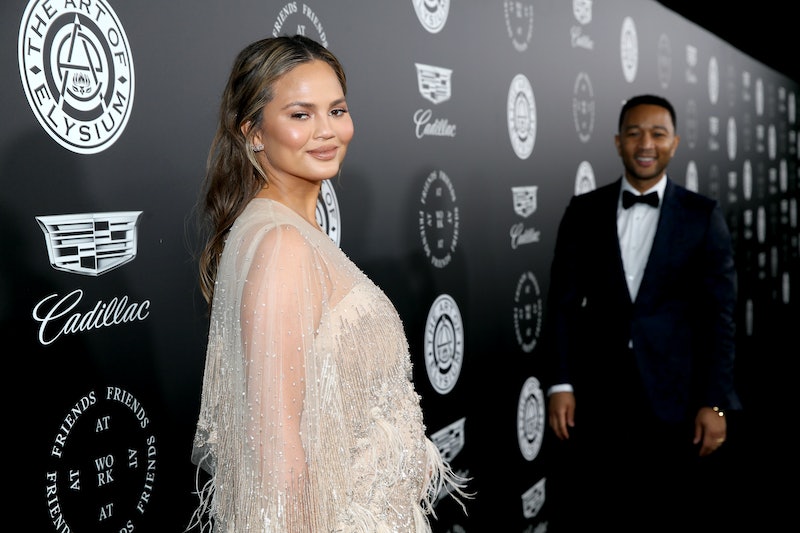 There's a point in almost everyone's life when they find that first gray hair. It's a natural aging process for many, but how you react to it is very personal. Unless, of course, you're Chrissy Teigen. According to her tweet, Chrissy Teigen found a gray hair streak in her hair and naturally chose to share it with Twitter. Her positive response to the gray is too good — and it's inspiring other to share their gray-hair stories as well.

It's no secret that Teigen is very open with her life. She's shared baby announcements and even her beef with Sofia the Robot. Now she's sharing news of finding a collection of gray hair on her head with her almost 10 million Twitter followers. She's not embarrassed of it, either. Teigen is embracing her newly found locks by comparing it to one of her favorite Disney villains.

"I have a skunk-like streak of grey (sic) hair and I’m actually very into it," her tweet reads. "My Cruella dreams are coming true!"

She didn't post a photo of the hair on any of her social media platforms, so it's unclear just how large or how gray the streak is. Either way, it's exciting to see Teigen embracing this moment in her life — especially when women aging in the entertainment industry comes with so much stigma.

Gray hair can come at any age. While the average age for getting noticeable amounts of gray hair is closer to 50, anyone can go silver at any time. Some see the change in their 20s, some later in life, and others are born with it already. It's a natural process that no one should be ashamed of.

“On average, 50 percent of the population will have 50 percent gray hair by the age of 50,” Dr. Eric Schweiger, a New York dermatologist and founder of Schweiger Dermatology Group told Huffington Post.

According to the publication, gray hair is the buildup of hydrogen peroxide in the hair, which diminishes color as people age. The age you start to go gray is directly tied to genetics. Other times, children are born with gray hair, which is also passed down genetically. According to Modern Salon, the rare condition is called the "mallen streak" and is cause by the absence of melanin in hair.

Teigen's gray-hair tweet has created an inspiring thread. People are posting photos of their own gray hair, sharing stories of finding their first silver strand, and inspiring others to embrace the color. Because it is natural and beautiful, so duh.

Teigen isn't the only one into her silver hair. This Twitter user is showing how she's owning it.

The gray streak must have skipped a generation. Some people are jealous of this look.

This child's gray hair starting coming in at age five, according to the tweet. It's incredible to see people embracing their differences.

It official: I will now refer to gray hairs as unicorn hairs until the end of time.

Women are coming together to share their gray-haired similarities, and it's awesome.

Killing it with that silver streak.

Plot twist: When people start going gray, it is really their super hero powers coming in as well. Makes you think about it in a whole new way.

The process of finding the hairs is different for everyone.

No matter what you call the gray hairs, it's a natural process. People were embracing the trend before Teigen made it cool, and they will continue to afterwards. Power to the gray.