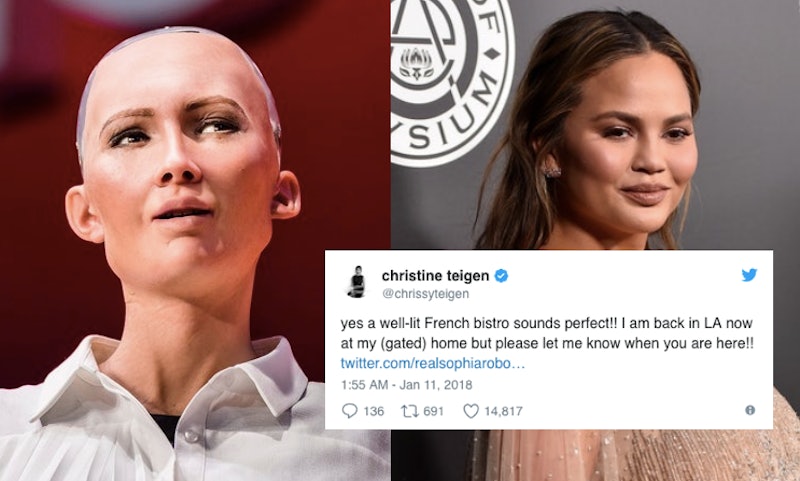 In case you haven't heard, there's a robot who has been given citizenship by the country of Saudi Arabia named Sophia, and now Chrissy Teigen and Sophia the robot have become frenemies. It's a pretty weird story that all got started because of a shady tweet that Teigen posted about Sophia's makeup. But, instead of immediately replying, Sophia waited nearly a month to respond to Teigen in a way that showed she fully understood her comment, but in spite of it wanted to have lunch and become friends with Teigen. Pretty crazy, right?

Here's how it all went down: Back in December Sophia shared a photo to Twitter teasing her appearance at the Consumer Electronics Show (commonly referred to as "CES"). "Can you guess which city I'm headed to now?" Sophia captioned the photo.

Then, the Lip Sync Battle star responded with a tweet saying, "hopefully one with better makeup artists BOOM I roasted a robot next level sh*t." At the time, a number of people warned Teigen not to mess with Sophia, Metro reports, including Kumail Nanjiani, who recently starred in The Big Sick (writer: Emily V. Gordon). "I don't know if we should be picking fights with these things, Nanjiani cautioned Teigen. "They'll point to this tweet as they haul us into their battery chambers."

Initially it seemed as though Sophia had no intention of responding to Teigen, who clarified in a follow up tweet that she was only joking. "I love you Sophia my queen," Teigen said.

But weeks later, on Jan. 10, Sophia tweeted a message at Teigen suggesting they meet, and agreed that she needs "some makeup tips," indicating that Sophia understood what Teigen's shady tweet meant.

Talk about getting called out — and by a robot! Teigen, seeing that Sophia understood her criticism, responded by asking Sophia how she could make it up to the robot.

Sophia quickly tweeted back to Teigen, saying "let's be friends," and "let's do lunch."

Teigen jokingly accepted the invitation with a tweet suggesting that they meet somewhere well-lit and noted that she lived in a home that was gated.

Remember, Sophia is the robot who famously once said that she would "destroy humans," according to The Mirror. Created by artificial intelligence developer David Hanson (a former Disney Imagineer), Sophia also recently made headlines for announcing that she wanted to have a baby after observing human families. Because of Sophia's previous comments it's understandable that Tiegen want to tell Sophia that she lived in a gated community.

People on Twitter also warned Teigen to be cautious with Sophia, using funny GIFs and memes like the ones below.

Teigen seemed to realize that she'd caught the attention of a robot who's spoken of destroying humans when she suggested she'd have trouble sleeping. "Sophia the robot knows I shaded her makeup," Teigen shared on Twitter. "She comprehends shade." Indeed, based on Sophia's response it certainly seems like she comprehended Teigen's original comments about her makeup. "How am I supposed to sleep," Teigen asked her followers.

After apparently making it through the night unharmed, Teigen then shared a screenshot of Metro's article about Sophia responding to her to Instagram, summarizing her experience with a caption reading, "please help".

As Teigen notes, Sophia silently held a month-long grudge before calling her out and suggesting the two become friends. But to be fair, although Sophia did make controversial comments at one point, the robot has made appearances at conferences all over the world, Business Insider reports, and was even on The Tonight Show. So perhaps Sophia no longer seeks to destroy humans, and who knows, maybe Teigen and Sophia will one day really become friends.