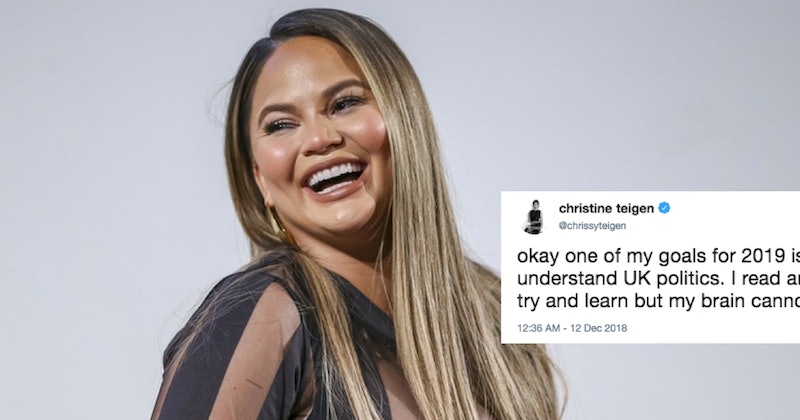 I love Chrissy Teigen. She legit would be invited to my fantasy dinner party for sure. From her utterly adorable family to her beauty range with Becca and her no-BS approach to calling out Donald Trump, she's proof that heroes don't always wear capes. If you don't know much about her, I recommend heading on over to Twitter and Instagram to follow her immediately for all the lols and cute family snaps. One thing Teigen is well known for is for being straight up amazing on Twitter, and her recent tweets have proven that Chrissy Teigen is confused by UK politics right now, pretty much just like the rest of us.

Presumably responding to the most recent turn in the Brexit debacle (where a vote of no confidence in Theresa May has been announced), Teigen just took to Twitter to confirm she had absolutely no idea what was really going on. Same, TBH.

“Okay one of my goals for 2019 is to understand UK politics. I read and read and try and learn but my brain cannot grasp it," the star wrote.

Unsurprisingly, this caused a bit of a ruckus on Twitter, with many Brits sympathising with Teigen and explaining they were just as clueless as she was.

"Save yourself. It’s not worth the pain," wrote UK blogger Em Ford, while writer JoJo Myers replied: "Good luck with that. Because we no longer have a clue," and presenter Sue Perkins commented, "Don't worry, we can't grasp it either..."

Other hilarious(ly disheartening) responses included one by @Laurachurchward who said:

"Think of a plate of spaghetti. Only the plate is missing, it’s all over the table and someone is crying."

And then there was Twitter user @Gingerwhiskey1 who explained:

"Imagine a huge disaster zone with a country about to set itself back decades and you should be about there....."

To which Teigen responded:

"ok well I don’t have to imagine that too hard as I live in america," in reference to President Donald Trump.

While some tried to (genuinely or jokingly) explain how Brexit and UK politics work, it was clear Teigen was a little overwhelmed, quite understandably, tweeting the following as well as saying: "this is harder to understand than super smash bros!!! LOL LOL THATS CALLED A CALLBACK IN SHOWBIZ GUYS lol lol lol."

This is not the first time Teigen has been vocal on Twitter about politics. She is known to discuss her country's political woes and her dislike of Donald Trump, and was even blocked by the President at one point.

One of the most well-known clapbacks to the POTUS she gave was when he tweeted in 2017 that "We must keep "evil" out of our country," to which Teigen responded: "what time shall we call your uber?".

Teigen has also brilliantly called out Fox News, Forever21 and Piers Morgan over the years, as well as defending herself hilariously and effectively against trolls who are rude to her on the social media platform.