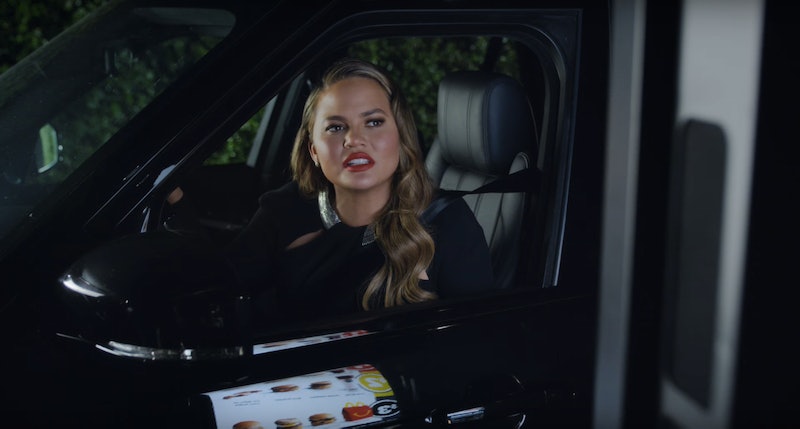 Some things just go together: socks and shoes, Chrissy Teigen and Twitter, french fries and... milkshakes? OK, the last pairing is polarizing, but any fast food aficionado knows the unexpected combo is a salty-sweet dream come true. And when I chat with Teigen over the phone, the model-cookbook author-TV host can't help but agree. "Oh my god, are you kidding? All the time. I just taught Luna how to do it," she says of dipping fries in shakes. It's that very candor that explains her massive Twitter following — even if it's something she herself sometimes gets baffled by.

While it wouldn't be that random, given Teigen's public persona of being the most relatable celebrity, the fries are actually a relevant topic, since she is promoting McDonald's $1, $2, $3 Dollar Menu and appears in the brand's commercial set to air during Sunday's Oscars. (In it, she sneaks cheeseburgers into an awards ceremony, and it's not all that far from reality, since she admits to buying burgers four at a time to save some for later.)

Back to those fries, Teigen says her 1-year-old daughter (whose second birthday is next month) was initially hesitant to dip them in dessert. "We kind of had to force it on her. She was like 'No, mama, this isn't right. No, mama.'" But as it turns out, Luna "loves it," and that's not the only thing the toddler is a fan of.

"When [Luna] sees ketchup, we have to hide it," Teigen continues. "She can't know that there's ketchup around. If there's ketchup in the vicinity, she must have it. All of her play toys have a fake ketchup, and I can't even have the fake ketchup because she wants something real... But yes, we are big ice cream dippers is my point."

Teigen's tangent about ketchup, fries, and ice cream also feels ultra on-brand for the soon-to-be mother of two, who's built a following on Twitter by turning the mundane into millions of retweets. And not the least bit disingenuous, since she pauses and adds with a laugh, "You can tell I'm pretty passionate about it, I could talk about it forever."

"You just say it and you don't expect it to become a saga... I'm like, oh my god, I'm going to ruin myself for people."

But no, even she doesn't know why her following is so huge. Over the past few years, Teigen has become one of Twitter's most popular voices. Of course, her career spans well beyond 280-character musings, but she's essentially an internet icon — and she's well-aware. When I ask if tweets ever blow up bigger than she expects, and she immediately says, "Oh my god, they do."

"You just say it and you don't expect it to become a saga or a story, and I'm always nervous," admits Teigen, whose posts about bringing scalloped potatoes on an airplane or her toilet disappearing have made headlines all across the internet, including on this very site. "I'm like, oh my god, I'm going to ruin myself for people."

Seriously, it's gotten to the point where her friend, comedian Neal Brennan, will jokingly call her out. "He's like, 'What epic clapback did you make today?' Because it's always so blown out of proportion. I'm like, that wasn't even a good clapback, I was just saying something." (Despite her humility, most of her clapbacks are indeed top-notch.)

"When you sell it as 'epic' or 'hilarious,' all it does is open me up to people being like, 'It's not that funny.' 'It's not that good," she continues. Sure, she appreciates that people find her funny, but adds, "Sometimes you just want to say something and have it go away." Even she admits, "I don't know why it blows up. I just want to say something dumb. That's all."

"Odds are, there are going to be people that don't love you, and that's OK."

Still, she's not oblivious to the power of the internet — like when she posted an innocent inquiry, seeking ripe bananas to make bread, and wow, did fans deliver. Kind strangers met up to exchange bananas with Teigen's mother and the rest of us watched in awe. "There is so much good that can come out of it," she says of social media in general. "There are, of course, so many dark days, and sometimes you just want to read something silly or you just want to look at puppy memes."

But alas, she's human and the negativity gets to her at times. Considering the way trolls have viciously gone after her in the past, it's more than understandable. "It really is a case of the squeaky wheels are the loudest," she explains. "Because I will read thousands and thousands of awesome comments from awesome people... And then you get those one or two people, and for some reason, those become bigger than the thousands of people that have been so wonderful to you all day. That can be really frustrating."

Teigen continues, "Odds are, there are going to be people that don't love you, and that's OK." And again, she turns to the positive: "You shouldn't let it consume you, but it can be a really great place if you let it. That's the great thing about Twitter — it is all dependent on who you follow. If you hate Twitter, then you don't follow the right people."

In fact, it's because of Twitter that Teigen's McDonald's gig feels so right. Back in 2016, she tweeted a picture of herself wearing Big Mac pajamas — and now, the universe has come full-circle with her starring in their ad. But the Big Mac comes second to her true love (you know, besides John Legend): Sausage McMuffins. "I'm a big fan of breakfast sandwiches, no matter the time." So much so, that she buys two and combines them.

And speaking of Legend, Teigen's husband plays a role in her cooking, too. "John is definitely a great taste tester. But it's harder, because he loves everything." Since their palates are super similar, she jokes, "We have the same mouth basically."

In that case, you can presume the Grammy Award-winning singer also is a fry-shake dipper. So who knows, maybe the next cookbook will include some sort of chocolate ice cream pie with a french fries-woven basket crust — sans ketchup. Sorry, Luna.