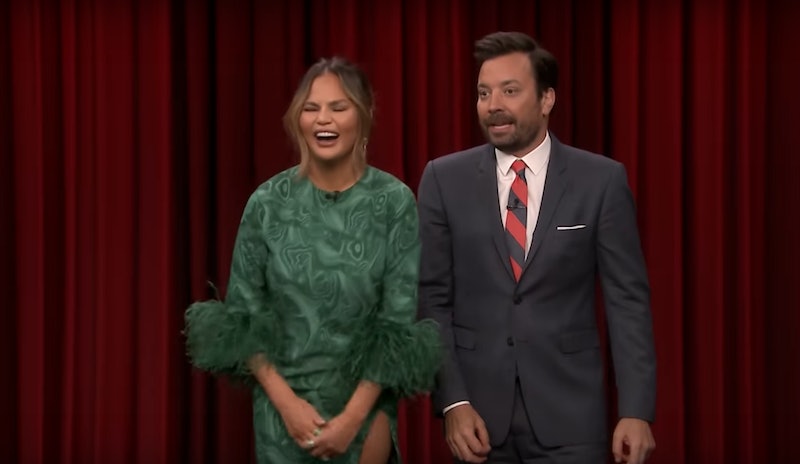 Chrissy Teigen is pretty much down for anything. Want proof? Well, during a recent episode of The Tonight Show Starring Jimmy Fallon, Teigen and Fallon played a gross and creepy game — scratch that: a super gross and creepy game — that will probably make your skin crawl. Think you're up to watching the whole thing go down? You've been warned.

As E! News reported, Teigen appeared on The Tonight Show on June 24, and while the feather-lined sleeves of her emerald midi-frock were really, really pretty, they might not have been the best thing to wear for the occasion. The occasion was a game that Fallon had dubbed, "Can You Feel It?", in which he and his guest stick their hands in a box with various mystery items and try to figure out what's inside — "by touch alone," he clarified.

Teigen laughed nervously at first and appeared somewhat apprehensive, then asked Fallon, "Has there ever been actual dangerous things in there?" Despite the fact that he applied in the affirmative, Teigen told him that she was down, adding, "I like to touch."

Fallon nobly volunteered to go first, and even though Teigen tried to throw him off, he correctly guessed the item in question: a stick of butter. Seems like a safe start, right? Well, things definitely escalated from there.

Next up, Teigen nervously reached into a box filled with a sandcastle, but incorrectly guessed that it was an ant farm after Fallon freaked her out. Still not so bad. Although, it did have a real, live hermit crab perched upon a tiny throne. Adorable, but probably not something you want to grab.

You know what else you probably don't want to grab? A lungfish, which is what Fallon was then presented with. FYI: Lungfish aren't like, dangerous or anything, but they do look very, very slimy and very much snake-ish.

Fallon (barely) brushed its back with the tip of his finger, and immediately went bananas. Neither he nor Teigen even knew what it was by sight, but after Teigen gave it a little pet she told the audience, "I wanna cook it." Cravings 3, perhaps? (Please no; totally kidding.)

Teigen's next mystery item was a toy dinosaur grabber, which gently nipped her finger when she stuck her hand in. It was hilarious. You have to watch it. But honestly, she freaked out way less than most people would after being nipped by a foreign "thing" — which, again, just goes to show that she's legit down for whatever.

OK, well, kind of. For the last item, Fallon and Teigen were supposedly going to stick their hands in the box together. However, Teigen snuck a peek at what was in the box — live cockroaches, OMG — and, understandably, pretty much walked off the show entirely. "I'm a thousand percent not [touching that]," she told the host. "This might be the worst one I've ever seen on here." Um, yeah, same.

Fallon did, in fact, touch the roaches, but he wasn't able to guess what they were. Once he saw them, though, he basically dropped down to his knees, which is a very reasonable reaction, to be honest.

Anyway, nobody got hurt and the whole thing was entertaining. Definitely worth a watch. As long as you're cool with your skin crawling, of course.