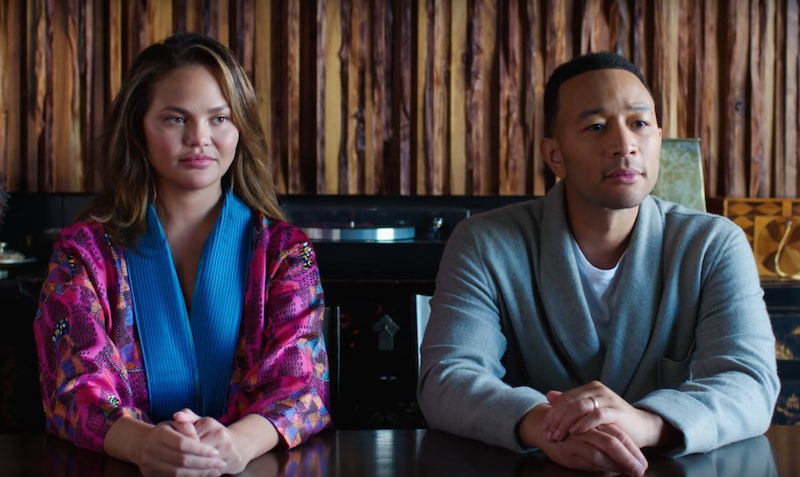 Getting pulled into a police station to take a lie detector test must be unbelievably nerve-racking. As it turns out, though, taking it at home isn't much better. Chrissy Teigen and John Legend took a lie detector test together from the comfort of their own abode in a new video for Vanity Fair, and tensions were high. Now, obviously, the stakes were pretty low. However, that definitely didn't prevent them from buckling under pressure when it came to topics like married life, Legend's music, and Kanye West.

Teigen and Legend both donned bathrobes for the occasion, most likely in an effort to keep the vibe casual. Or maybe they just didn't feel like nervously perspiring through real clothes. Teigen volunteered to be in "the hot seat" first, which meant fielding a slew of questions from her better half. Legend started off with some easy basics, and then moved on to a range of questions about their relationship. Most of them resulted in some pretty loving responses — well, aside from the part where Teigen confessed that she kind of can't stand Legend's 2008 track, "Green Light," and joked that her "favorite day" was when Legend's Twitter account got hacked in 2017 — the test confirmed she wasn't the hacker, though.

Perhaps one of the best moments to come out of Teigen being in the hot seat, however, was when Legend presented her with a throwback photo of himself, and asked her to make it into a meme. "I've gotten a glow-up since then," he admitted. And his wife definitely agreed. "I do not know this man," Teigen laughed as she pushed the photo away. "I am sorry to that man," she added, referencing Keke Palmer's now-famous quote about Dick Cheney.

Teigen's reference to Palmer's "sorry to this man" meme is especially on point given that the viral moment originated during the actor's own Vanity Fair polygraph test. Shown a picture of former Vice President Cheney, Palmer had absolutely no idea who he was. "He could be walking down the street, I wouldn’t know a thing," she said. "Sorry to this man." The phrase basically became an instant meme, and was definitely the perfect response to Legend's super awkward throwback photo.

When it came time for Legend to answer some tough questions, fans got served with some fun facts about the singer straight out of the gate. For example: he was Prom King in high school, he and Donald Trump both went to the University of Pennsylvania, and he becomes "incensed" when Teigen doesn't put the cap back on the toothpaste. Oh, and "at times," he totally misses "the old Kanye." Same, John. Same.