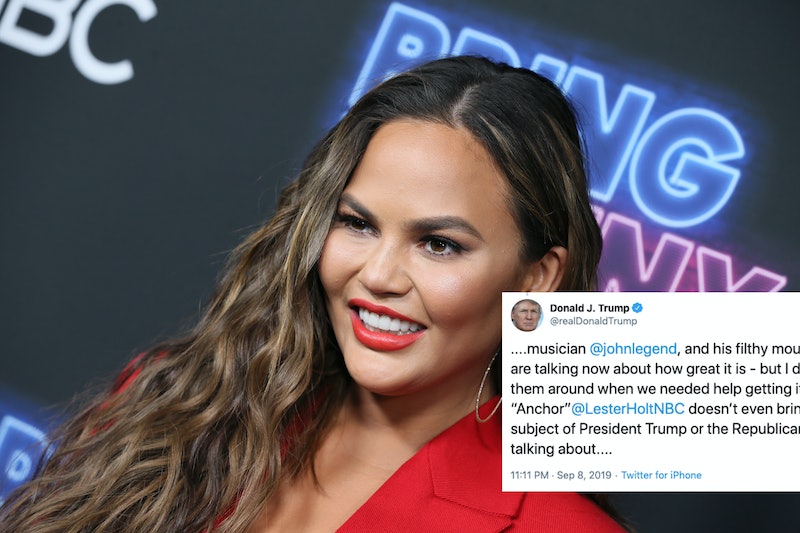 This isn't the first time they've had Twitter drama, and it probably isn't the last. On Sunday night, Donald Trump called Chrissy Teigen a "filthy mouthed wife" on Twitter after John Legend appeared on a town hall about criminal justice reform, Of course, Teigen had her comebacks ready to go, and she and Legend definitely weren't holding back on this one.

It all started when Legend talked about the First Step Act on the town hall, which aired on MSNBC on Sunday night, which caused Trump to take to Twitter. According to him, he was the only one who could have gotten the act passed but people like Legend are the ones who are getting the praise for it, even though Legend himself has gotten involved with his Free America campaign and has been vocal about his support for criminal justice reform for years (which Trump did not mention in his tweets).

Trump called out Legend directly, but only referred to Teigen as his "filthy mouthed wife" without tagging her in the tweet. "Guys like boring musician @johnlegend, and his filthy mouthed wife, are talking now about how great it is — but I didn’t see them around when we needed help getting it passed," he wrote.

Following his tweets, Teigen shared one of her own, pointing out how Trump had tagged everyone in his Twitter rant except for her — and showing him what a "filthy mouthed wife" she could be with a brand new nickname for him. "lol what a p*ssy ass b*tch. tagged everyone but me. an honor, mister president," she wrote.

But she didn't stop there. She went on to share a photo of herself working on a chalkboard for Luna's first day of school pictures to commemorate what she was doing when Trump mentioned her in his tweets.

"Luna, remember the night before your first day of school? When mommy was making your sign and the p*ssy ass b*tch president had his 9th meltdown of the day," she tweeted.

And after that, Teigen also shared that she didn't have any part in the town hall special, making it all the more interesting that Trump decided to include her at all, writing:

"the absolute best part of his tweet is I literally didn't speak in the special, nor was I mentioned. I'm cackling at the pointless addition of me because he cannot not be a b*tch"

Soon enough, Teigen was trending for her responses to Trump, including the hashtag #FilthyMouthedWife — and there's a hashtag that referenced Teigen's new name for him, too.

Even Legend got in on it, first tweeting about how Trump is needing to be praised before sharing the new hashtag himself.

"Imagine being president of a whole country and spending your Sunday night hate-watching MSNBC hoping somebody — ANYBODY — will praise you," he said. "Melania, please praise this man. He needs you. Your country needs you, Melania."

Back in July 2017, Trump blocked Teigen on Twitter, although in 2018, a judge ruled that, as president, Trump could not block users from seeing his tweets. That ruling was upheld in appeals court in July 2019, although Teigen tweeted at the time that Trump had still not unblocked her.

If anyone knows how to respond to Twitter hate, it's Teigen — even if the person it's coming from happens to be the current president of the United States. It can definitely hard to be an American in 2019, but at least there are people like Teigen who can help everyone keep their sense of humor in an otherwise difficult time.

More like this
Kim Kardashian Remembers Her Last Words To Death Row Victim Brandon Bernard
By Jake Viswanath
10 Times Diana & Meghan Spoke Similarly On The Royal Family
By Sophie McEvoy
Cardi B Explains To David Letterman Why She Uses Her Star Power For Politics
By Jake Viswanath
What Is Barack Obama’s Net Worth? He Makes *Way* More Now As An Ex-President
By Hugh McIntyre
Get Even More From Bustle — Sign Up For The Newsletter