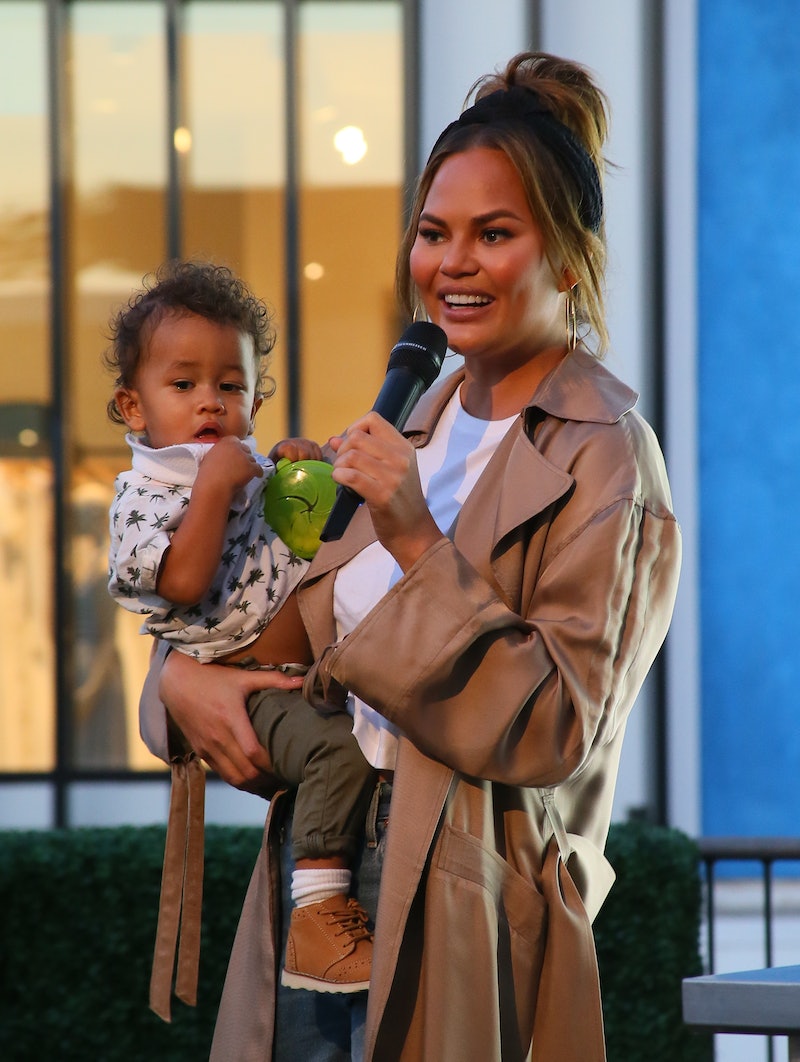 Chrissy Teigen wanted to give her son, Miles, a second birthday gift he'll always remember, but it looks like things may not have gone as planned. In Chrissy Teigen's second birthday post for Miles, the Cravings author revealed that the toddler doesn't actually like the baby bearded dragon that she got for his birthday, but it seems like she's hopeful he'll grow to love his new pet.

Teigen introduced her social media followers to the pet lizard on May 13, revealing on Twitter that she and husband John Legend intended him to be a gift for Miles' big day. (Their daughter, Luna, also has a pet of her own: a hamster named Peanut Butter.) "I am now a proud bearded dragon owner!" Teigen wrote on Twitter. "He is very little right now — I got him for Miles' birthday but I know we will share a lifetime of happiness and cuddles (well his lifetime) (maybe mine at this stress rate)."

While she intended to let Miles name his new pet, Teigen revealed on Twitter on May 16 that the bearded dragon had been named Sebastian, at the request of Luna and Teigen's mother. However, not everyone in the family is such a big fan of Sebastian; Teigen later posted a photo of Miles posing next to a sign full of facts about the 2-year-old, which revealed that he "[doesn't] like my new bearded dragon (yet)" alongside a frowning face.

Still, the Teigen-Stephens family didn't let Miles' reaction to his new pet dampen the festivities, as the cookbook author shared videos of the Sesame Street-themed birthday party they threw on her Instagram Story. In addition to custom cupcakes — which featured toppers with photos of Miles hanging out with Cookie Monster and Big Bird — the birthday boy got to enjoy a chocolate racetrack cake and fried chicken sandwiches in the backyard.

"Happy birthday to the boy who gives our household so much life," Teigen wrote on Twitter to celebrate Miles' big day. "You’re bonkers, my tiny fearless love bug, but I wouldn’t have it any other way. I melt every time I look at your cheeky little face. I love you, happy TWO!" On his own Instagram account, Legend shared an equally proud birthday tribute, writing that "Our little guy is 2 today. Happy birthday, Miles!"

While Miles' second birthday party might be a little more low-key than his — appropriately — bear-themed first birthday party last year, it seems that Teigen and Legend are doing their best to make their children's big days memorable during quarantine. On April 14, the singer shared a photo of Luna, dressed as a Disney princess, from her 4th birthday party, which was also thrown at home. "Luna's living her best birthday life. Mommy decorated," Legend wrote on Instagram.

He continued, "No preschool friends were able to come, but they sent video messages and she was thrilled. Good memories for her during this strange time." Thanks to the addition of his new pet, Sebastian, and all of his favorite Sesame Street characters, it seems like Miles is making plenty of happy birthday memories of his own.