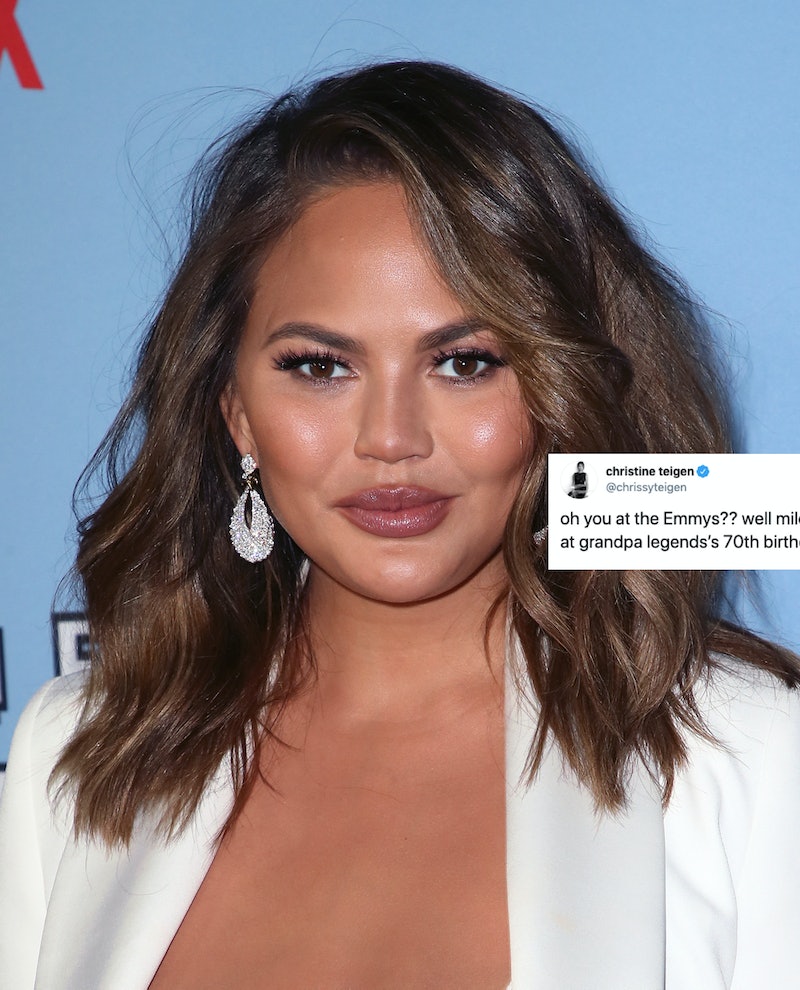 Chrissy Teigen's commentary has become a staple during award season — whether she's grimacing over Stacey Dash taking the stage at the 2016 Oscars, or boasting about wearing a Bed, Bath, & Beyond towel while watching the 2019 Grammys from her couch. On Sunday night, though, she switched things up completely. Teigen skipped the 2019 Emmys for a whole different kind of party.

During the Emmys, Teigen shared a video of Miles dancing on Twitter and revealed that the whole family was out of town celebrating John Legend's father's birthday. She wrote:

"oh you at the Emmys?? well miles and I are jamming out at grandpa legends’s 70th birthday in Springfield, Ohio!"

While other celebrities prepared to hit the after-parties, the Legend family was having a bash of their own. In the video, Miles spun in circles while music played in the background. Teigen also tweeted a funny response to the typo in her original post shortly after, writing, "Legendeseseseses’s*"

Over on her Instagram Story, Teigen shared more moments from the wholesome family weekend. That included a video of Miles hanging around family members at his grandparents' house. She also shared a video of an amazing-looking cinnamon bun pie she made from the Milk Bar cookbook that's literally "stuffed with 'liquid cheesecake' filling."

Teigen wasn't the only one to document their trip. John Legend also shared a picture of his father from the birthday bash on Instagram, wishing him a happy 70th. The singer posted a photo of Miles with both of his grandmothers.

While Teigen and Legend opted for a weekend of family bonding and pie instead of hitting the red carpet, it doesn't seem like either actually regretted that decision. Fans, on the other hand, likely missed Teigen's iconic award show facial expressions. In 2015, Teigen cried as Legend accepted a Golden Globe for Best Original Song, and pictures of her face immediately went viral. The cookbook author leaned into the meme, tweeting, "Sorry I don't practice my cry face okay."

In September 2018, Teigen addressed her silly award show faces during an appearance on The Tonight Show Starring Jimmy Fallon. Apparently her hilarious expressions were entirely involuntary. "That was me trying not to react at all," she said. "You know how it works at these things. The camera’s like two feet in front of you and the red light goes on and as soon as that light goes on I’m like, 'Be normal.'"

Even when she isn't attending an award show in-person, the cookbook mogul's commentary is worth following. In February, Teigen live-tweeted the 2019 Grammys, and for many, her real-time thoughts were more entertaining than the show itself. To start off the night, Teigen hilariously explained Legend's absence from the ceremony on Twitter with a joke, teasing, "no Grammys for us today. john got and EGOT and egot lazy."

Fans might be disappointed that Teigen's meme-worthy facial expressions or typical Twitter play-by-plays were missing from this year's Emmys. But at least the star still kept fans updated about her alternative plans. And who doesn't love a great video of her kids?