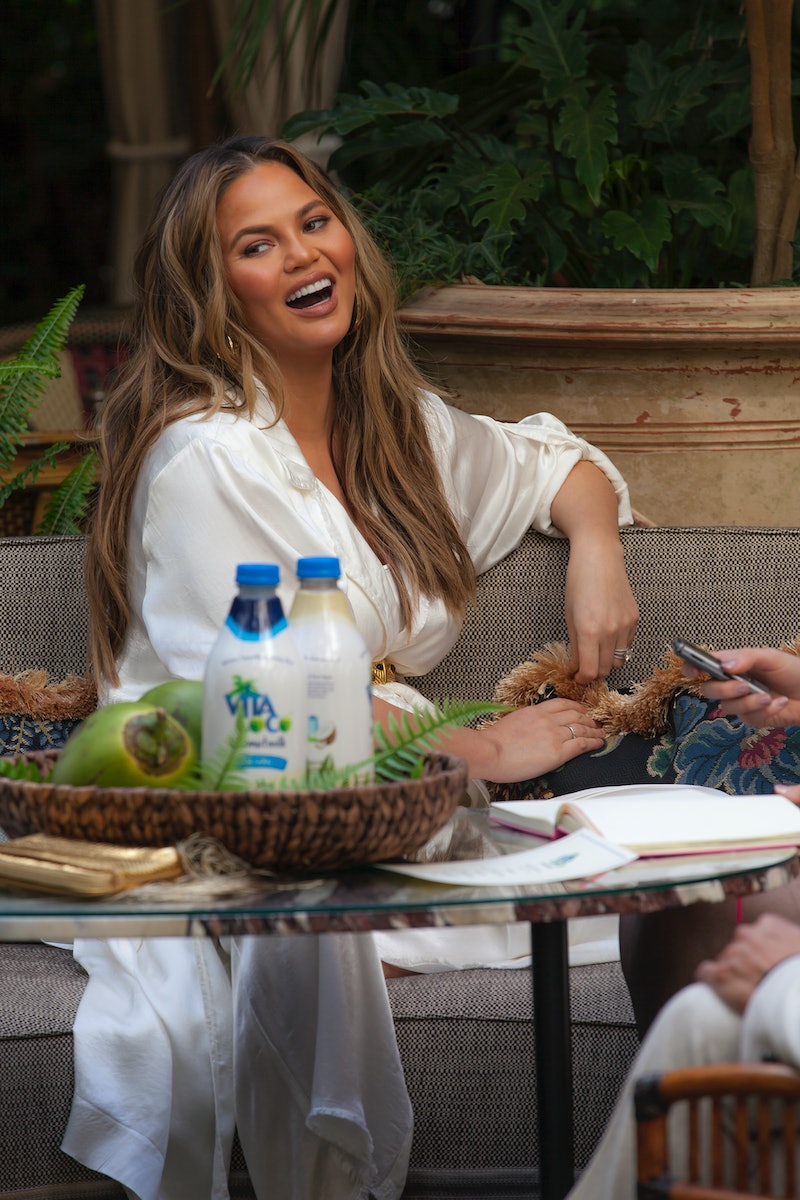 By now, fans of Chrissy Teigen's know that it would be nearly impossible to find anything that could embarrass the model, cookbook author, and social media maven. In fact, she's usually the first person to poke fun or call herself out on something, whether it's getting a bad tan or peeing in her pants. At this point in her career and life, Teigen could care less what you think about her, and this is especially true when she's traveling.

"I’m the kind of person, when I’m on a flight, I don’t care what I look like. I will do the full face mask [and] I will cover myself in coconut oil. It doesn’t matter to me," Teigen shares with Bustle at a brunch for Vita Coco's new Coconutmilk. According to Teigen, there is a good chance you can always find her with coconut oil on her face "all the time."

Teigen says she's always been a naturally dry person and tries to drink as much water as possible, but it’s just hard to keep up, especially "when you are pregnant and you’re always out of breath and always dehydrated and always dry," she explains. As a result, Teigen has always been "crazy" about slathering her skin with coconut oil.

If you're wondering whether she's a "coconut oil solves everything" (beyond beauty) kind of person, Teigen most definitely is. The expectant mother has always loved using coconut oil to hydrate her body, but found it especially useful when she had her first child, Luna.

"I’ve been working with Vita Coco for almost four years now and I fell in love with [coconut oil] first because of Luna. We were buying it by the jar full for her tush and everything."

There's no end to the ways Teigen uses coconut oil. She loves it for cooking, especially when she's scrambling eggs or buttering her toast (which she notes is her very favorite way to eat it).

Perhaps the most unusual way Teigen likes to use coconut oil, however, is for her nipples, she tells Bustle. If you're a mom, this might not be totally bizarre sounding. In an interview with Romper, International Board Certified Lactation Consultant (IBCLC) Tera Hamann says that coconut oil is great for treating and healing nipple pain during lactation. "It’s just an all-purpose product in my household," Teigen laughs.

It should come as no surprise that Teigen is obsessed with coconut milk. Her mother, Vilailuck Teigen (aka @pepperthai2), is from Thailand and coconut milk (as well as other parts of the coconut) is a staple ingredient in many Thai dishes. "[Coconut milk] gets utilized so much in my home now [since] my mom lives with us and [I have] a Thai background. We don’t do very much dairy in Thailand," Teigen explains.

"Mom and I did a cooking school in Thailand five years ago where we learned the importance of coconut milk, so I got to learn all about the process... and I kind of really just fell in love with it."

Teigen also shares that Luna is a big fan of coconut milk, too. "I always thought I was the kind of person who wanted to be the heavy, hearty, savory, just really, bold, bold flavor person. I never thought I’d be an almond milk or a coconut milk person, but having a kid kind of changes everything and you want to give them the best that they can have, but you want it to be delicious and you want them to like it. too."

According to Teigen, you can expect to find around 15 coconut milk-based recipes coming out in her next cookbook, Cravings 2, not just because she loves coconut milk so much, but also as an homage to her Thai background.

"It's very Thai heavy this year because I was so proud of how well everybody was able to make Thai food [from the last cookbook]," says Teigen. "I was scared, I was like, 'They're gonna see fish sauce and they're going to be so grossed out by it' but no, everybody sent me so many amazing photos of these Thai recipes that they were really proud to make, so I definitely took that to heart and made sure we had a lot more Thai recipes."

While there isn't an official release date for when her cookbook will be available, one thing's for sure — fans should get their coconut products ready.