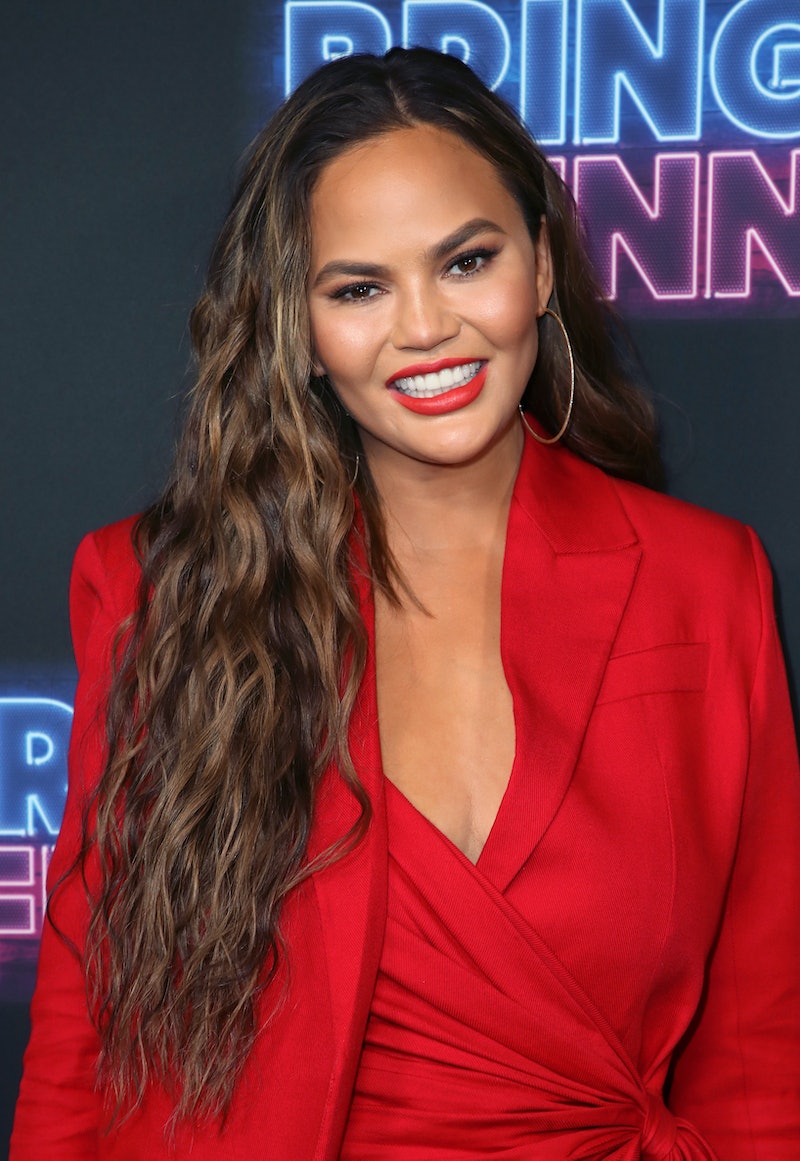 The Teigen-Legend family continues to prove just how talented they truly are. Chrissy Teigen posted a video of her dog on Wednesday, and the footage just might convince you that Paul, the bulldog, could totally be a Westminster Dog Show contestant. If not, no worries, because Teigen and John Legend's recognition of Paul's talents is enough. He's really good at not only following directions and listening, but shaking his paws and sitting.

In the video that the Bring the Funny judge tweeted on Aug. 14, you can watch as Legend filmed Teigen telling Paul to give her his paw and to please sit down on a table. "Paw," Teigen is heard saying to the family pup. Paul eventually obliged and gave his paw to his owner. Then, the Cravings: Hungry For More author requested Paul give Teigen his other paw, which he did. Finally, she asked Paul to sit and he did exactly that.

In addition to hilariously captioning her video, "Westminster here we come," Legend laughed and declared in the video, "Best in show!" What really makes the video even more adorable is listening to Luna state everything Teigen said to the dog. The 3-year-old acted as her mom's echo. Luna is never seen, but only heard and her tiny voice is just so sweet.

Legend and Teigen are big dog people. They also are the proud owners of two other dogs, Penny and Pippa, both French bulldogs. Sadly, in March 2018, Legend and Teigen's bulldog, Puddy, died. He was with the couple for a decade and understandably meant the world to them. Next to a series of photos of Puddy shared on Instagram, Teigen wrote a lovely tribute to her late dog on Instagram after his death.

"John and I got Puddy in our first year of dating, when I convinced him half-birthday presents were a real thing," she shared. "10 years ago, on May 30th, I found the dog that would be there for us through every up, down, new house, new city, new tour, new travel. He welcomed new pups and loved on new babies and new bellies. He was there for everything. Every time I needed a taste tester, someone to kiss or needed to sob into his stinky rolls, he was there."

For Teigen, the loss of Puddy was a big one, especially since it felt like she lost a piece of herself. "It’s true what they say. We are their entire lives and it is the greatest shame that they can only bless us with a short spark of time in ours," she also shared on Instagram. "I always knew I would lose a piece of me when he left us. I feel the hole now. I will love you forever, my boy. My heart aches. Thank you so much for everything, everything."

There's no doubt Puddy will forever be a part of their lives. And now Teigen, Legend, Luna, and Miles have three other wonderful dogs who make them laugh and smile. Heck, even one of them is so awesome he could totally win the title of Best in Show.