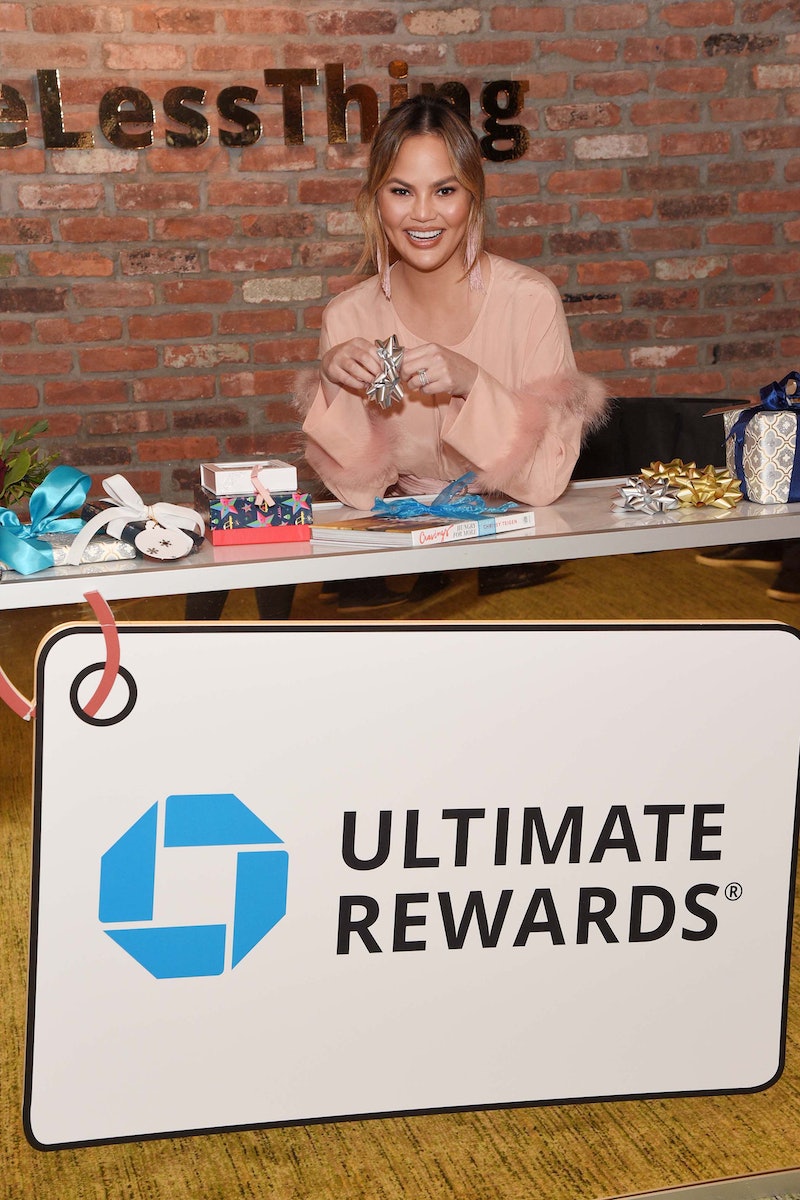 It's no secret that Chrissy Teigen loves food. Between her two incredible cookbooks, Cravings, and Cravings: Hungry for More, and the endless, drool-worthy recipes that she shares on her Instagram stories, Teigen has established herself as a bonafide chef goddess, and extremely relatable foodie. So it's no surprise that when it comes to Teigen's tips for choosing gifts for friends and family, she keeps it meaningful, funny, and occasionally food-themed.

"I really am such an Amazon shopper, and whatever they recommend, I'm like, that is a good recommendation. I love it," Teigen tells Bustle at Chase's #OneLessThing holiday pop-up shop in New York City, where she discussed how Chase cardholders can receive discounts this holiday season. One of her favorite finds as of late? The Rollie Eggmaster on Amazon. "It rolls the eggs in this [thermos-like] thing, and it goes down the cup and then it comes out as this egg hot dog," Teigen says.

In case you need a visual, and you most certainly do, the Rollie Nonstick Easy Quick Egg Cooker's Amazon page features quite the milieu of bad infomercials at their finest. And if you're wondering who other than Teigen would dare to make an egg into a perfect cylinder, then eat it, the product has a four-star rating on Amazon, and has been dubbed an Amazon choice pick. This definitely has to be a featured recipe in the next cookbook. Maybe Sriracha can make it somewhat appealing? Maybe?

While she enjoys giving a well thought-out, purposeful gift, Teigen doesn't shy away from getting extra quirky when it comes to gag gifts. "I take pride in the silly, dumb things," Teigen says. "I don't know, they make me happy at least."

Suddenly the egg cooker sitting in your Amazon check-out doesn't seem like such a bad idea, does it? If you've ever fallen prey to a cheesy commercial promising to make your life easier with an ingenious, yet funky cooking contraption, you're not alone. Teigen says she's made it her hobby to snatch up the strangest kitchen gadget Amazon has out there, and add it to her own wishlist. While they make quite the good, go-to silly present when messing with loved ones around the holidays, Teigen says that she often buys these tools on a whim for herself. And though she rarely uses them, she admits they seem like a good idea at the time.

"I buy things like that all the time because I think they're funny," she says. "I bought a theater industrial-sized nacho machine that holds [a huge] bag of cheese. [I've also bought] a hot dog roller, like the ones at 7- Eleven that doesn't even cook them, it just, like, warms them for hours. I buy dumb stuff all day, basically."

And while Teigen also swears by gift cards, and giving priceless experiences that will create cherished memories, there's no memory quite like the look on someone's face when you've given them the gift of endless cheese, or when they transform an egg into something completely foreign to what it resembled before. Hot dog rollers for everyone this year.