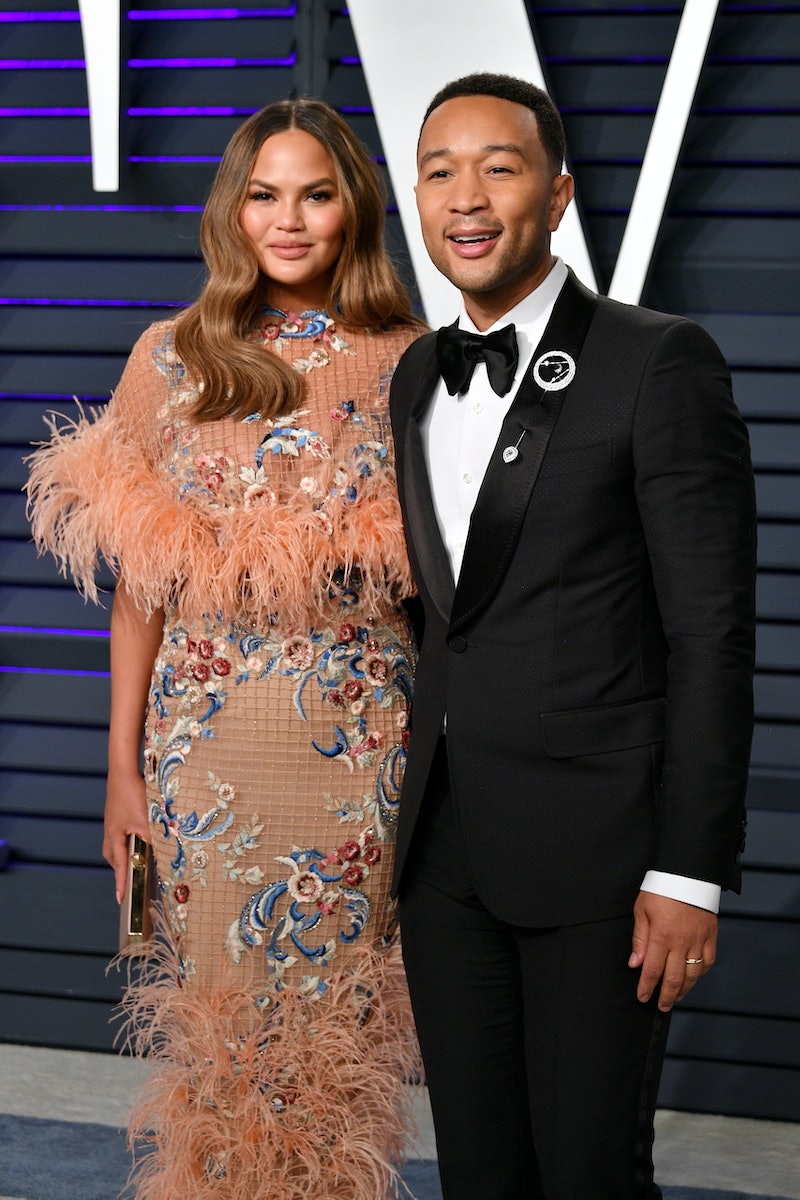 Chrissy Teigen continues to dominate the Instagram game. As seen on her social media account, Teigen posted chalkboard photos of John Legend and baby Miles to show off just how much the pair is totally twinning.

Teigen first started the photo fun on Saturday, Feb. 23 when she posted a snap of her son, Miles, in front of a chalk board containing some cute updates about the nine-month-old. Some of those adorable updates include some of his favorite songs ("Baby Shark" and "B-I-N-G-O"), how he hasn't acquired a taste for quinoa yet, and how much he loves his big sister, Luna. His little age board also included some more straightforward details about Miles' nine-month milestone, including the fact that he has two teeth, stands at 28 3/4 inches tall, and weighs 15 1/2 pounds.

The Lip Sync Battle host kept the fun going on Feb. 24. She posted a photo of her husband (in honor of his 482-month milestone) posing just like his son in front of his own chalkboard featuring some facts about himself, which served as the most adorable tieback to his mini-me. In the snap, which Teigen jokingly captioned, "wow they grow up so fast," Legend revealed some interesting facts, just like Miles did before him. Unsurprisingly, when it comes to what the father-son duo love, they both similarly highlighted their sweet relationship with their family.

According to his chalk board, Legend loves peanut butter and chocolate (who doesn't?), his family, and naturally, music. On the other hand, he doesn't have a fondness for beets or bad grammar, which I can personally relate to. As for his favorite song, he chose "I Say A Little Prayer" by Aretha Franklin and, instead of a true "bedtime story," he highlighted The Rachel Maddow Show as his favorite program to watch during bedtime.

Of course, like his son, there were also some basic facts included on his chalk board, such as how many teeth he has (30), his height (70 inches), and his weight (184 pounds). I'm sure many of his fans can agree that this is probably the best and cutest way to learn a little bit more about the talented musician.

If you follow Teigen on Instagram, you would know that this isn't the first time that she's taken a sweet approach to Legend and Miles' lookalike status. Most recently, she posted a photo of the two on Jan. 3, in which they could be seen sharing a twinning moment on their tropical getaway. In her caption for the snap, she wrote simply, "my twin boys," which says it all about the adorable photo.

She's even referred to her son as his dad's mini-me on various occasions, just as she did in October 2018. Teigen posted a photo of her son (in connection with her Pampers Sure partnership) and wrote, "Tummy time for my mini John!!!"

Anyone can see that baby Miles is already the spitting image of his dad. But, if you couldn't see the resemblance before, Teigen's recent chalk board photos of her husband and son will surely highlight their adorable twinning status for you.