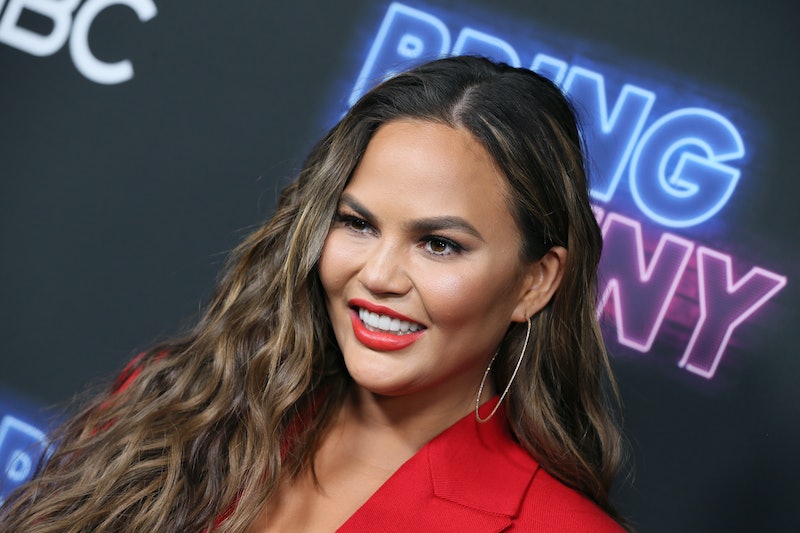 The Fourth of July holiday weekend is quickly approaching, which means you've got some preparing to do. Before you stock up on burgers and buns, though, you might want to set up that vacation response email at work. Need a good template? Just take a look at Chrissy Teigen's new photo of Miles, which is pretty much the ultimate out-of-office reply message.

As reported by E! News, Teigen, her husband John Legend, and their two kids, Luna, 3, and Miles, 1, have decided to spend Independence Day romping around Italy. Both Teigen and Legend have been sharing plenty of pics from their vacay ever since they arrived, and it seems as if they're squeezing in some work while they're there, too.

Well, one member of their family is working, at least. According to a recent photo Teigen posted on Instagram, Little Miles has been spending his down time honing away at his administrative skills. "if you email me anytime in the next 7 days this is who is replying," Teigen captioned her pic of Miles, who appears to have happily stepped into the role of his mom's assistant.

Miles looks like the consummate pro in the shot Teigen shared, which shows him grinning from ear-to-ear while sitting in front of a laptop. OK, he's not exactly sitting, per se — it's more of a crouch-slash-kneel. Maybe he's practicing some new at-desk exercise that the rest of us aren't hip to yet?

Also, it's worth noting that his business casual outfit is on-point. He's wearing some slim-fitted pants that are cuffed at the bottom, a smart-looking red tee, and grey and white striped suspenders. He's wearing suspenders, you guys. Please look at them now. Is it not the most adorably professional thing you've seen in your life?

Anyway, it's abundantly clear that Teigen's affairs are in good hands with Miles. Meanwhile, Luna is out there just straight-up living her most bellissimo life. On July 2, the Cravings author shared a pic of her daughter getting in a good hot tub soak while cruising around on a boat. Yes, Luna is chilling in a hot tub. On a boat. In Italy. What a life.

Teigen's caption for the pic was simple, but it summed up the shot of Luna perfectly. All she added was a single crown emoji. You may bend the knee to your queen now.

All jokes aside, it seems like Teigen and her family are really enjoying themselves in Italy. And don't worry — Luna wasn't the only one who got to kick back on that luxurious-looking boat. Miles got his turn, too (assumedly after he finished responding to all of Teigen's emails, of course).

Both Teigen and Legend shared the same pic of Miles, who appeared to be having the time of his life on the boat while wearing some very cute, very tiny swim trunks. No, he didn't get to join his big sister in the hot tub this time around — he's probably a tad too small for that — but instead, he got to hang out on the boat's giant, above-board bed. Not too shabby.

It's unclear whether or not Miles will be on the clock for the majority of their vacation, but it's nice that they're letting him have some fun while they're there. More cute suspenders shots now, please.