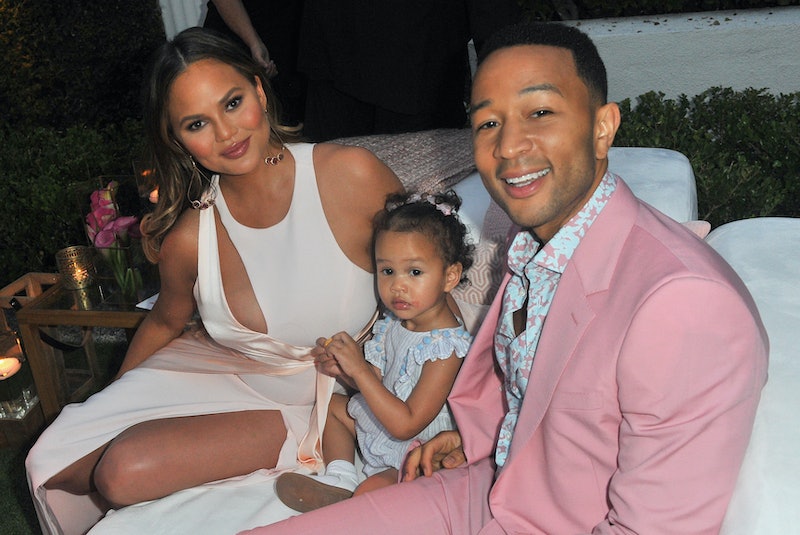 Being a parent is hard enough, but being a parent in the spotlight has to be truly difficult — and when you're Chrissy Teigen, it seems like people are just waiting to point out what you're doing wrong. But this mom isn't letting it slide. On Monday, Teigen shared a new photo of Luna and Miles on Instagram, and in her caption, she took the opportunity to call out everyone who criticizes her parenting skills based on what she shares on social media.

The picture itself is pretty cute — this is Teigen and her kids we're talking about, after all. In the photo, she's on the beach, posing with Luna and Miles, one kid in each arm. Miles looks like he's asleep or otherwise checked out of the situation, and Luna isn't really that into the whole "picture with mom" thing. Still, Teigen looks great, and it's a really cute picture, but what really matters is the message the post came with.

In her caption, she wrote:

By the looks of this photo, it seems like Teigen chose the one where Miles' head is supported, Luna is over it, and her face looks just OK — even though Teigen's face actually looks pretty good. It makes sense that she would have hesitated before posting a photo (or any other), considering how hurtful troll comments can be on Instagram. She's right; if Miles' head didn't look properly supported, she would have had to hear about it, and Luna not looking totally psyched to take a photo will probably garner a few comments as well. But it's hard to wrangle kids of any age into a posed photo, especially kids who are this young, and expect them to look thrilled about it.

And for the record, it seemed like trying to get her kids to cooperate in photos was a theme for Teigen on Monday. Behold, this video of Luna being not at all impressed that her mother released another collection of makeup with BECCA. Luna, this is a big deal. Be proud of your mom.

This isn't the first time Teigen has taken on the shaming she's received since becoming a mother, either. In the past, she's never been shy about exposing mommy-shaming when she sees it, especially when it's directed at her. Last year, she responded directly to comments from people judging the way Luna was dressed in a photo, sharing a screenshot on Twitter:

And when people shamed Teigen and husband John Legend for going out to dinner shortly after Luna was born, she had an answer for that, too.

Why should anyone have to put up with unsolicited comments about how they choose to parent their kids? People might feel like they know Teigen because of her social media presence, but it still doesn't give anyone the right to shame her for her choices.

When Teigen — or any other mom — shares a photo that involves her children that she loves, she shouldn't have to worry about the criticism that will come with it. So maybe from now on, we can all just focus on the fact that Teigen has a beautiful family, and how awesome it is that she chooses to share them with us. Luna and Miles are obviously two very well loved and taken care of kids, and that's all that really matters.