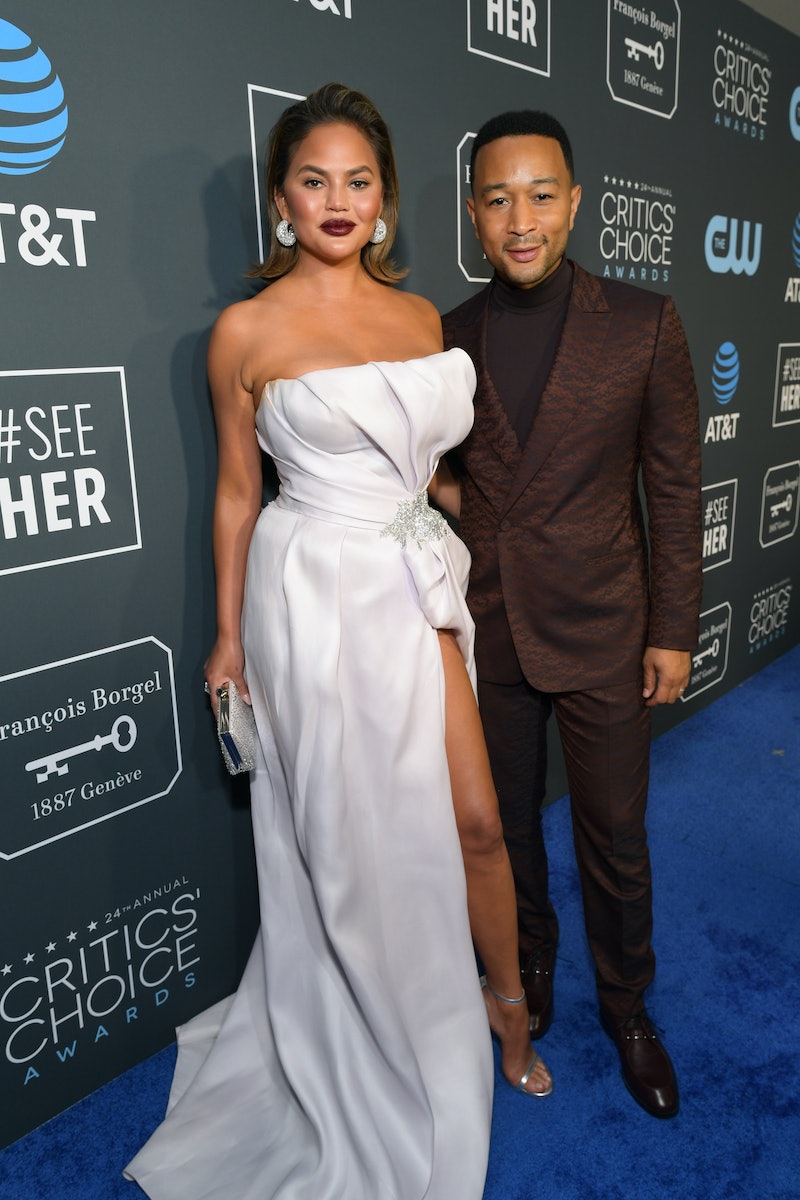 Chrissy Teigen and John Legend's son Miles is growing up right before their eyes — and in front of the entire internet, too. On the day after Valentine's Day, the mom-of-two shared a photo of her baby that has fans doing a double take. In other words, Teigen's new photo of Miles in a tuxedo shows the sweet little one looking a lot like his dad, and it's pretty adorable.

"Someone had a wonderful valentine's dinner with @alanavanderaa and @chrishimmm," Teigen wrote in her Instagram caption, tagging two of her friends. "Maybe he will fit into these shoes by next v-day." If you look a bit closer at the photo, the baby's feet aren't actually in the mini Vans, which look a little too big for him right now.

Teigen's post drew plenty of comments from fans and fellow celebrities, but there's one especially memorable exchange. Legend himself wrote, "He is me!" And Teigen had a funny response. "It's important to cheat with people who look like your husband," she replied to his comment.

Fans, meanwhile, left supportive comments about how cute the picture is, and how much Miles is the spitting image of his dad. "He looks so much like daddy. He is truly your little man," one person wrote. "He’s adorable, just like his dad!!" another fan commented. And Miles looks like he's having the time of his life, smiling wide in his fancy outfit.

Teigen never resists the chance to show off her signature sense of humor on Twitter and Instagram, so it's no surprise she made a joke out of her husband's comment.

Teigen and Legend didn't post about how they spent Valentine's Day together. But if their friends were watching over Miles, and potentially Luna too, they might have enjoyed an evening together, just the two of them.

And while Teigen didn't post about her own Valentine's Day plans this year, she did take the time to troll Kim Kardashian on Twitter about how exactly Kanye West set up all of the roses on the ground surrounding musician Kenny G. The people need answers, after all.

Last year, Teigen celebrated Valentine's Day by posting a video of her and Legend singing "L-O-V-E," and it honestly was too cute. Anything the two of them do together shows how close they are, whether it's singing or joking around in Instagram comments.

And while Teigen's latest Instagram post is drawing plenty of comments about how much her husband and son look alike, it's hardly the first time it's happened. A different picture of Miles that Teigen posted this month drew in plenty of similar comments. "He looks exactly like john," one person wrote. "Tiny john legend! Twins!!" another fan commented.

It's not exactly revolutionary for a child to look like their parents, but Miles really does look like a mini version of Legend. And with his Valentine's Day tux on, the baby looks like he could be getting ready to perform onstage with his EGOT-winning dad. For now, though, Miles will just keep being adorable and basking in his parents' love.