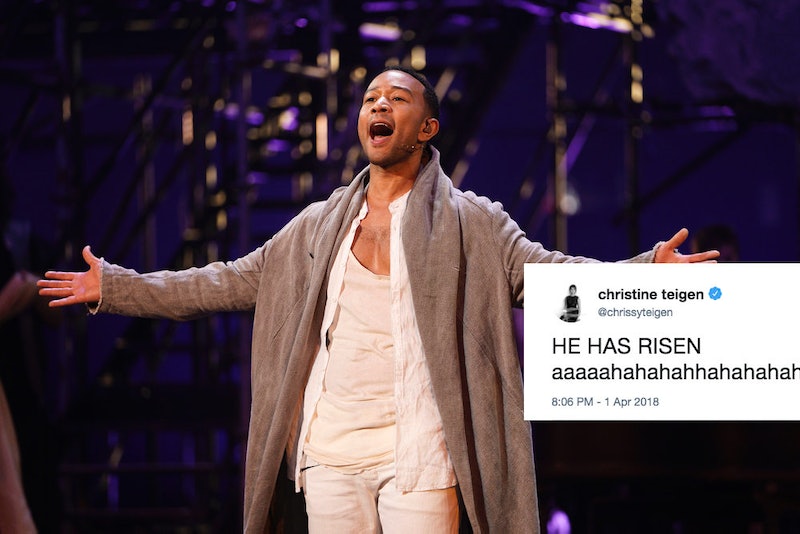 When John Legend took the stage Sunday night for NBC's production of Jesus Christ Superstar Live In Concert, viewers' eyes were glued to not only his stunning performance, but also a certain someone's Twitter feed. Chrissy Teigen live-tweeted Jesus Christ Superstar, offering her signature commentary from the very start of the show, and people were living for it. Several times on Easter Sunday, Teigen tweeted reminders that the show was coming up, ensuring that it didn't slip any minds.

And the day of the broadcast itself was far from the first time Teigen has spoken about her husband's turn as Jesus Christ in the TV adaptation of the iconic musical. In the week leading up to the event, she shared some behind-the-scenes photos of Legend and their daughter, Luna, hanging out in between rehearsals. She also tweeted that she was #cooking4jesus along with several photos of some impressive blackened salmon and salad she was apparently preparing for Legend. She also poked fun at his onstage interactions with his costars, tweeting, "who's this chick he's giving bread to?" in response to a rehearsal photo.

But nothing could compare to Teigen's live-tweeting of the event:

She had some very insightful thoughts on who the enemies of Jesus were, and where the plot was going to go — sinister black coats don't exactly scream "good guys."

During one scene in which the ensemble onstage was getting messy with glitter and paints, Teigen said that was basically her routine when the couple's daughter gets messy at home. And she shared that Luna visited the set during a less than ideal scene rehearsal.

And she was quick to praise Legend's co-star, Sara Bareilles, as she absolutely killed the role of Mary Magdalene. She also wasn't shy about praising Legend for some big number she knew he was anxious about performing, proving that she's not just around to poke fun.

The loving trolling of Legend goes way back to December when Legend first announced that he had earned the role — he tweeted the information and Teigen immediately hit back with, "how are they gonna fit u in the manger."

Legend and Teigen's relationship has always been in the spotlight, but as Teigen has taken her social media fame to new heights in recent years — she's just shy of 10 million followers on Twitter and has more than 16 million on Instagram — the two have more and more made names for themselves as being couple goals. Sure, the long, sweet, sappy posts between lovebirds have their place, but there's nothing quite like a lovable jab in front of millions of strangers to solidify a relationship's stability.

Though one of her trademarks is poking fun at Legend (and generally being the best at this whole "internet" thing), it's also clear the excitement and encouragement Teigen has always offered him. And that support system likely exactly what he needed as he took on this larger than life role. Legend said that because he's a songwriter, it was more of a challenge for him to take on the music of other people for this production. "It’s a very different process really getting into the mind of a different composer and trying to connect with that and also just learning the material, it’s different from doing a John Legend show," he said at a panel, according to Forbes. "Once you get to the point of being comfortable with, confident with the material, the story opens itself up to you, the character opens itself up to you."

That change of pace didn't stop him, though, from throwing his whole weight into the performance that viewers witnessed on Easter Sunday, and it seems like that was always the plan for Legend. The man's won his share of awards, including 10 Grammys (of 28 nominations), and even an Oscar for his work with Common on "Glory," featured in Selma. He's a true professional with a staggering amount of talent, so it's really no wonder he was asked to step into such a high profile figure's shoes. “I feel really comfortable getting into the character, really diving into the music," Legend said prior to the production, according to the same Forbes article. "Bottom line, they offered me the chance to play Jesus Christ. I was like, let’s do it."

With Teigen waiting in the wings, Legend stepped up to the plate in a big way, and knowing that he had his wife and daughter looking on as it all unfolded couldn't have hurt.