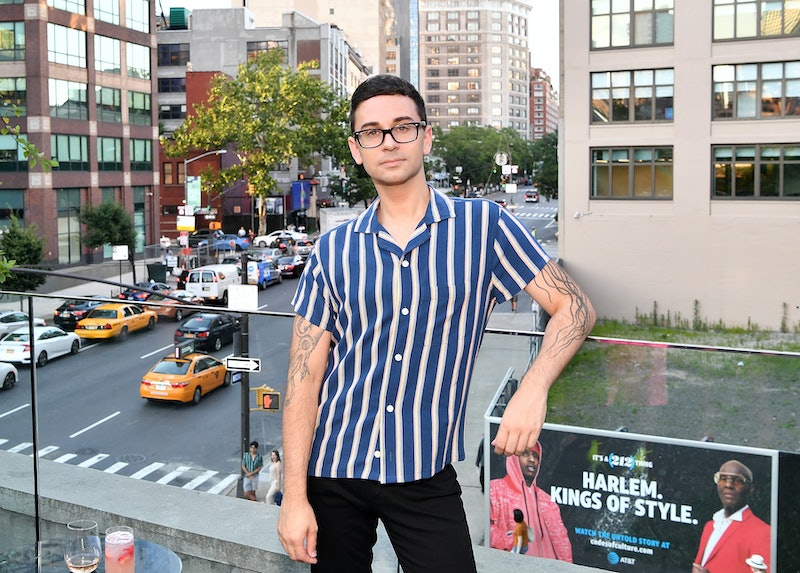 Why be one or the other when you can be both? Blurring the lines and being your multi-dimensional, authentic self has never been more important in our culture. And that's exactly why Christian Siriano designed a suit x dress for SweeTARTS, helping to promote the candy brand's "Be Both" campaign. The designer created a custom, couture candy look for New York Fashion Week to celebrate that we are all more than one thing.

The concept of a suit x dress is familiar to Siriano. In fact, Billy Porter's black velvet tux dress at the 2019 Oscars was a Siriano original. But how does candy factor into Siriano's latest statement-making design? Well, just like SweeTARTS, which are sour and sugary at once, you can be masculine and feminine, dressed up and down, casual and glam, tough and tender, and beyond. The outfit, which is literally a half-suit and half-dress that is bisected right down the middle, captures the essence of the candy brand's "Be Both" mantra. It's a truly powerful message about gender, presentation, and being your authentic self.

And yes, the look is wearable and more practical than you think. Bustle sat down with Siriano at a private event held in New York City on Aug. 22 that revealed his SweeTARTS design. At the event, Siriano described the look as "a mix of tailored suiting and something you can dance in."

"It's made like a jumpsuit that zips up the back and it’s super supported like a sports bra," Siriano tells Bustle. "It's actually very comfortable and made from a textured stretch crepe that I use all the time. So it's like you're wearing nothing."

Siriano confirmed that the dress is a one-of-a-kind piece that won't be reproduced for sale. Instead, an actress will be wearing while seated in the front row at Siriano's NYFW show next month. While he wouldn't reveal which lucky star will be rocking this semi-frock, he did share that it looks even better on a real body.

"It really works on her and it's perfect," he teases. "You know how you see something on a mannequin and you're like, 'Hmm. I don't know about that.' But once you see this piece on a person, it comes to life with how you wear it."

Siriano has collaborated with brands like Victoria's Secret and Payless in the past. Pairing up with SweeTARTS for the fashion-forward and forward-thinking design was a no-brainer — and not just because their individual ethos align. It was also about the designer's love and nostalgia for the sweet treats.

"Growing up, for real, I was a SweeTART fan and we were a candy family," Siriano explains, noting that candy is already visual and fun and therefore more inspiring than you'd expect. "SweeTARTS was inspired by my work with Billy Porter and Janelle Monae. Their whole campaign is that. It was the right time to do something like this. When I do a partnership, it has to be what my message is, and not every brand is doing that right now."

Siriano easily found inspo in the candy. The color and feel of the SweeTARTS Original and Mini Chewy candies influenced his choice of a fabric that is as soft as it is structured, while the idea to do fringe came from SweeTARTS' latest sugary innovation.

"They just launched a rope candy, which is why I did fringe, which is something that I don't work with a lot," Siriano explains. "I thought, 'This could be cool, since [both] have movement.'"

Ultimately, the campaign's message of having the freedom to be whoever you want in life and in fashion is paramount for Siriano — both in the collaboration and beyond.

"Our culture is hopefully changing a little bit," Siriano tells Bustle. "You can be both and don't have to choose between one or the other.

"I hope it's not a trend, and that it stays. There are no rules anymore."