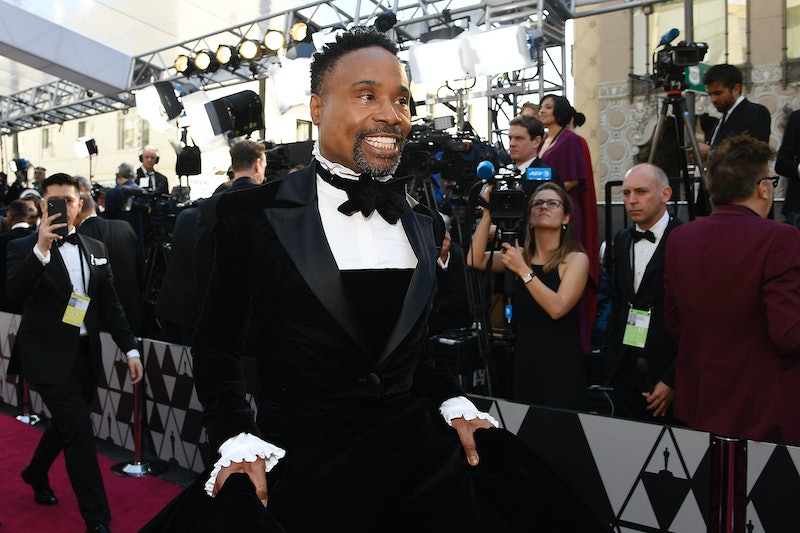 Now that's how to make an unforgettable sartorial statement at the Academy Awards red carpet. Pose actor Billy Porter wore a black tuxedo gown to the 2019 Oscars. It was a true Oscars fashion MOMENT — and one that Twitter fell in love with on the quick. Porter's was the kind of ensemble that you can expect fashion watchers to be talking about for days.

The black velvet dress was designed by Christian Siriano, who is known for his full silhouettes. It boasted a skirt with epic volume that was nipped at the waist and was topped with a bolero jacket. The outfit was an excellent execution of balance with a full bottom and a fitted top. The cuffs of Porter's white dress shirt were ruffled and extended past the jacket, resulting in some extra oomph. His supersized bow tie was an additional dose of flair.

The ensemble was instantly iconic and the ultimate in line-blurring fashion. The dress x tuxedo hybrid was also totally "fierce," which was the buzz word that Siriano often uttered during his winning season on Project Runway.

Since the Oscars effectively wrap Hollywood's long and fashionable award season, celebs, actors, and A-listers usually turn up in their black-tie best and in priceless couture. Porter, known for his gender-fluid clothing choices, definitely served up a lewk.

Porter looked amazing and he knew it. He exuded so much confidence with that hands-on-the-hips pose. Porter expressed as much on Twitter, thanking Siriano for the design and calling it a "custom couture masterpiece." It was hard to disagree with that assessment.

You can truly appreciate the major-ness of the skirt from this vantage point.

Since Los Angeles weather is usually mild — even in winter — velvet is an interesting choice of fabric since it can be so thick and heavy. But the richness of the texture made Porter's Oscar outfit further pop.

The "tuxgown" certainly amassed loads of much-deserved appreciation on Twitter. Another user summed up Porter's look by opining that he basically stole best-dressed honors and broke Twitter before the actual ceremony even started.

So, yeah, Porter's "tuxgown" or "gowntux" was one of the top fashion moments of this year's Oscars. But it was hardly a first for him. He usually makes the most of his red carpet appearances.

At the 2019 Golden Globes, Porter wore an embellished, champagne-colored suit paired with a cape. The fuchsia lining added a bold AF pop of color to the neutral-hued suit. According to The Hollywood Reporter, the Randi Rahm ensemble took six months to complete. That grand outfit was worth all the hours and effort that went into it.

Porter also wore a golden Calvin Klein dress with a matching Dolce & Gabbana blazer last month. Each of the outfit's component had ample sheen and further elevated the overall presentation. Clearly, the actor likes to add jackets to dresses. You can't argue with the results. He slays the pairing every time.

Porter's 2019 Oscars look was truly one of the night's most memorable.