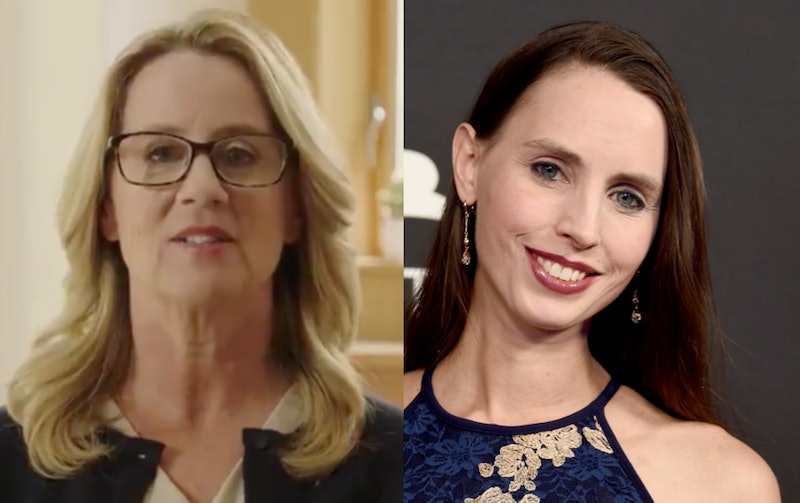 Former gymnast Rachael Denhollander was the first woman to publicly accuse former USA Gymnastics doctor Larry Nassar of abuse, helping incite a string of allegations against him that led to his lifetime prison sentence earlier this year. On Tuesday, she was honored with Sports Illustrated's "Inspiration of the Year" title, and none other than Dr. Christine Blasey Ford presented Denhollander's award — a fitting choice, since the two have much in common.

Ford became a household name in September when she accused Supreme Court nominee Brett Kavanaugh of sexually assaulting her when they were in high school (he denies this). Despite her public testimony against him, Kavanaugh was confirmed in October.

Until now, outside of a written update on GoFundMe, Ford has not spoken publicly since the hearings and seems to be seeking privacy. Faced with harassment and threats that, per NPR, continued at least until last month, she's been forced to move many times and hasn't been able to go back to her professorship at Palo Alto University. Rather than appear in person at the Sport's Illustrated event on Tuesday, she presented Denhollander's award in a prerecorded video.

In the speech, Ford described Denhollander as someone she "admire[s] so much," adding, "her courage inspired other survivors to end their silence, and we all know the result."

That "result" doesn't just include Nassar's sentencing — it also includes the people who were inspired by the athletes who came forward against him. Several Ohio State wrestlers, for instance, have said they were encouraged by the Nassar case to come forward with their own accusations against a former doctor who allegedly groped them (Richard H. Strauss worked at the school for almost two decades and died by suicide in 2005).

"I am in awe of you," Ford said, addressing Denhollander in her Tuesday speech, "and I will always be inspired by you. In stepping forward, you took a huge risk, and you galvanized future generations to come forward even when the odds are seemingly stacked against them."

Ford's and Denhollander's cases have many similarities. Both women accused men of sexually assaulting them when they were teenagers and raised the claims years later, in adulthood. Both were the first to publicly accuse a powerful man and helped set off a series of new allegations. Now, both are icons in the #MeToo era.

Denhollander was also named one of Time's 100 most influential people this year. Aly Raisman, another gymnast who accused Nassar, wrote Denhollander's Time bio and called her "my sister survivor."

Denhollander did more than simply come forward with her allegations. First she filed a lawsuit against Nassar and let hundreds of girls and women join her case. Per the Lansing State Journal, she then attended every day of the hearings in which 156 people read victim statements. Finally, she gave a powerful victim statement of her own.

"How much is a little girl worth?" she asked the judge. "I submit to you that these children are worth everything. Worth every protection the law can offer. Worth the maximum sentence."

"The lasting lesson," Ford said of Denhollander's example, finishing her speech on Tuesday, "is we all have the power to create real change and we cannot allow ourselves to be defined by the acts of others."