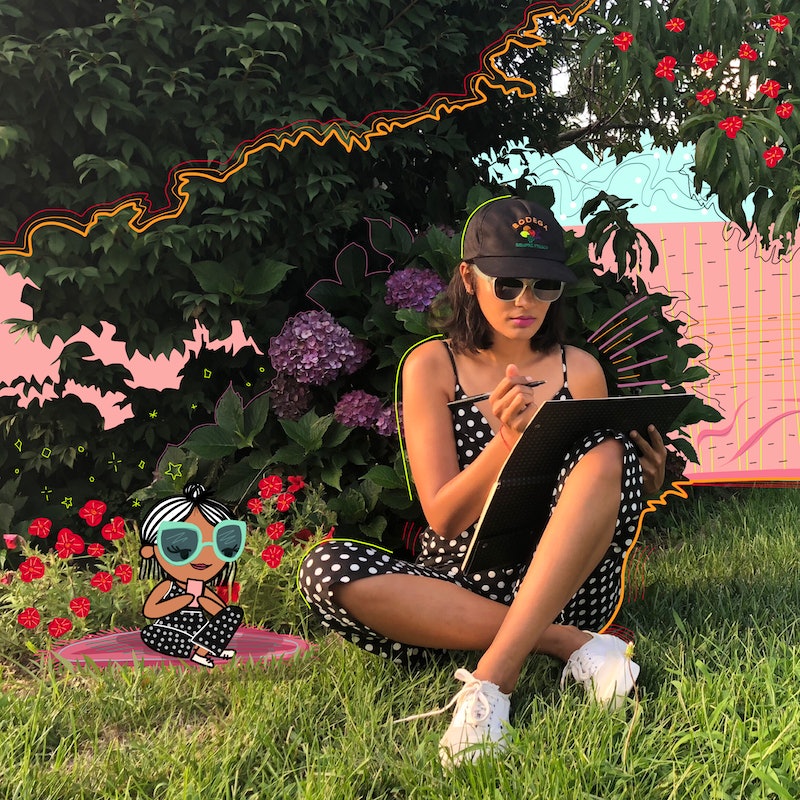 Inspiration can come from anywhere, even from curse words — and that was certainly true for Bustle Rule Breaker Christine Rai. While at her job at a renewable energy company, Rai realized that creativity was missing from her adult life, and so she began to pursue her dream of working as an artist. It all started when she regularly posted on Instagram her doodles of curse words, inspired by her grandmother's favorite Caribbean swears. With such great traction, and with her Instagram account booming, she decided to make a physical product with the help of Kickstarter — and that’s how the coloring book, Bad Words From Around The World, came to be. Bad Words was published in 2016, and Rai continues to serve up comics to her followers and fans on her Instagram page to this day.

Rai spoke with her friend Maya Lewis about taking risks as a woman of color in the comic world. Whether or not you're passionate about coloring or swearing, there's something to take away from their conversation, ahead.

Maya Lewis: When you initially are working at the renewable energy company and, probably, slowly putting less and less time into that and more time into your side project, how do you think [your family and friends] took the news of like, "I know I have degrees in this, but I'm gonna be an artist?"

Christine Rai: I think initially, my family, they've always been supportive of everything that I do, and we come from a long line of business owners. I feel like they kind of understand wanting to start your own thing and doing your own thing. They were kind of like, "She knows what goes into building your own thing, so we trust her to [pursue] whatever career she wants."

ML: Totally. Honestly, I feel like going out on your own, deciding you're gonna make something that is your own, rule breaking even more generally, can be kind of scary, definitely risky, especially when you're a woman of color. We have to think a little bit harder about the risks we take and the implications of that, the fallout if we don't initially succeed, all of those types of things. How do you process the good and the bad?

CR: I think [for] anyone who is kind of rule breaking or not really going down the traditional path, it can feel really isolating. And sometimes I get in my head because I'm kind of doing this alone, it feels like. So I remind myself of how far I've come, and remind myself that where I am now and the problems that I have now were just unfathomable a year ago. I built everything, and now I'm at this new place with all these new problems, but also a lot of new victories. So I try to just have mini celebrations for all of the good things.

If you are a person who is hating on something like women's body hair or just living their lives, that's not really a person whose opinion I am going to take personally.

ML: Your comics are on social media, which kind of opens you up to that whole unfettered mess that can be social media sometimes, like beautiful chaos. And your comics deal with so many topics, [for which] you've gotten just constant amazing, wonderful feedback. I remember when Mindy Kaling reposted your post, and literally we all, in a group chat together, squealed. We were just all so excited. But on the flip side of that, I remember your post on women's body hair, which literally should not be anything that anyone cares about, 'cause why? But I remember you got such [negative] feedback that I think at one point you turned the comments off. How do you balance that?

CR: Well, I know that the longer that I've been putting my work out there and as my platform gets bigger and more people see it, I am definitely not as affected by the negativity as I was when I was first starting out. It can still be tough reading negative comments. I don't take them personally anymore, because I feel like if you are a person who is hating on something like women's body hair or just living their lives, that's not really a person whose opinion I am going to take personally. If someone is disagreeing with the basic humanity of another person... we're on totally different pages.

ML: So, your comics, which I love, they're always super funny. They're always super relatable, kind of like social commentary. I was watching through them again the other day, and it was like everything from fashion, to being sweaty on the train, weird tan lines, anxiety, microaggression, grief, heartbreak, adulthood. You fit all of these huge topics into bite-size [pieces]. How do you choose what to put in your comics?

CR: A lot of my comics are things that happened to me recently or just things that are just happening in general. I think in terms of the relatability of everything — people in general, we all have the same experiences. I think [at first] they're really specific to me and not to anyone else, but then I get thousands of likes and hundreds of people tagging their friends because they also have the exact very specific experience. Anything that I put out there is just honest and people relate to it, because we all share the same emotions.

ML: Sometimes it's nice to know that someone else has experienced some really weird, strange thing that happens to you regularly that you maybe even feel self-conscious about. Now you're like, “Oh well, this other girl is going through it.” Not only that, but she posted it to hundreds of thousands of people to know about. Now you have this small community of people [who] wear bathing suits with lots of tan lines. You've built this weird little community. It's good to feel like I'm not alone.

All the rules are made by other people. We can break those rules.

What's one of the adulting rules that you break most often?

CR: I think, career-wise, a big rule that I've broken is following a set path. Everything that I've done in my career, I've done by asking people for what I want. All the rules are made by other people. We can break those rules. They were made by a bunch of old white dudes. They make up stuff like that. I wanted to make comics. The best part of it, is that worked out. It worked out swimmingly, like, beautifully.

ML: What's one rule you think people should break more often in illustration, in digital art, and graphic design?

CR: Whenever anyone asks me for creative advice, I would just say to ask for what you want. Reach out to people who you look up to, and reach out to companies who you want to work for. Just reach, don't wait for anyone. It doesn't matter if you do a really good job. If people don't know what you want from it, they're not going to know to help you. There's that saying, “The closed mouth doesn't get fed,” that I've been really living by. If you don't ask for what you want, you're not going to get it. And also, if you don't see yourself reflected in role models, just know that doesn't mean that you can't also be there.

This is a big takeaway that I got from Mindy Kaling, because it's like, you can be in whatever space you want to be in even if you are going to be the first one doing it

ML: Even if you're the only brown girl in the room, rock the room. Even if no one is reaching out to you, reach out to them if you've got the shit.