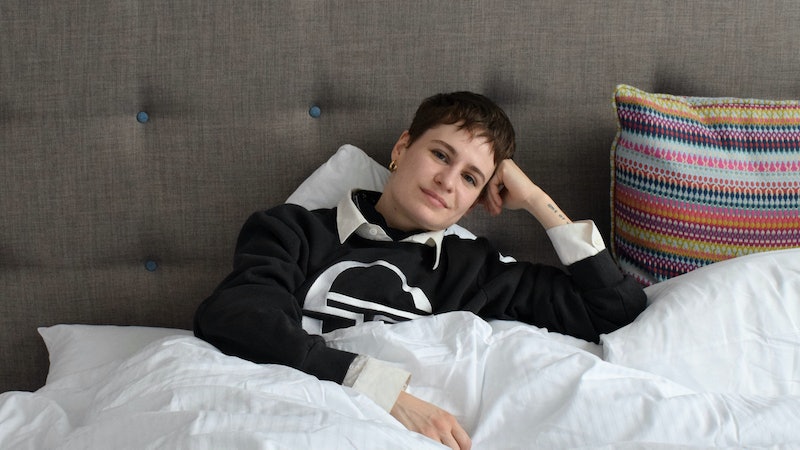 Since everyone streams nowadays, that means musicians seldom get those CD sales, which also means that there's a much bigger pressure on touring. Since it's become the bulk of a musician's income, it's an exhausting, sometimes electric, oftentimes chaotic kind of lifestyle, and no one seems to put their heart into it more than Christine and the Queens. The star who's politicising pop put on some of 2018's most mesmeric live shows, and on BBC's Duvet Days podcast, Christine and the Queens gave an unflinching insight into her touring experience — as well as some thoughts on sexism, femininity, sleep, and Michael Jackson.

From being alone and hopelessly heartbroken to having swathes of fans and critics raving about her — including having her second album Chris named the Guardian's album of the year — here's the story of Chris aka Christine and the Queens so far.

Aspiring to work in stage design, she quickly became disenchanted when her male peers were aided in their dream, while Chris was discouraged. "I was 20 years old, I was full of hope, and I was denied something just because I was a woman," she tells podcast host Abby Hollick from the comfort of her hotel bed, as part of the BBC's Duvet Days series.

"I was really low - I stayed in my flat with closed shutters for like a week, in the dark," she says, reflecting on a time when her dreams had seemingly collapsed, "and then I was like, Okay, two options now: I stay there and I just lay down and wait for it to stop, or I just try something. And I thought of London as a cool place to escape."

When she got to the city, she was taken in by a group of drag queens who had caught her humming, and recognised her talent immediately. Encouraged to write her first song, Chris remembers an "epiphany" like feeling. "It was like pouring out of me!" she explained.

Her biggest and most perpetual influence has been Michael Jackson, and you can hear his funk inflections throughout Chris' back catalogue. She reveals in the podcast, that while he didn't hang on her bedroom walls, he is "in my heart and my head," and maybe even her groin. She remembers the first time she saw him, and now considers that moment her "sexual awakening." "It was the first time I probably noticed something was happening down there," she says.

Chris is refreshingly frank on calling out the other images she was surrounded with in her childhood:

"I grew up as a young girl poisoned by images of perfection, especially inflicted on young girls. It’s hard to be a young girl growing up more than a young boy. I was immensely jealous of the freedom of young boys because as young women we are bombarded with images of poreless goddesses."

She continued to explain how these sexist double standards and policing of women's bodied can still impact her today.

"On the second record, I’m more sensual and I’m showing more body, and there was immediate slut-shaming, especially in France. They were like, ‘oh you’re relying on your body now’. I was like, is there any escape?!"

Then, how do you break of you it? Well, you can't, Chris says. "You can’t escape the male gaze. If you’re stuck in it, you may as well disrupt it." Chris might be the most welcome disruption pop music's had for years.